Perovskite developer Oxford PV has set a new world record for perovskite-silicon tandem cell efficiency at 29.52%, edging out the previous record set less than a year ago by Helmholtz Zentrum Berlin. The new record has been certified by the U.S. National Renewable Energy Laboratory.

Oxford PV announced a new record efficiency for its perovskite/silicon tandem, edging ever closer to the 30% milestone at 29.52%. This achievement also places the technology ahead of single-junction cells of any material, further validating the case for tandem cells as ‘the future of PV’. The new efficiency record has been certified by the National Renewable Laboratory in the U.S.

While some are still to be convinced of the merits of perovskite solar cells, Oxford PV has long been a pioneer of the technology. An announcement from the company made today includes a calculation that 35kg of a perovskite material could generate the same amount of power as seven tons of silicon. And it further notes that perovskites have achieved similar conversion efficiencies to silicon with only ten years in development, while researchers have been working on silicon PV for more than 60 years. 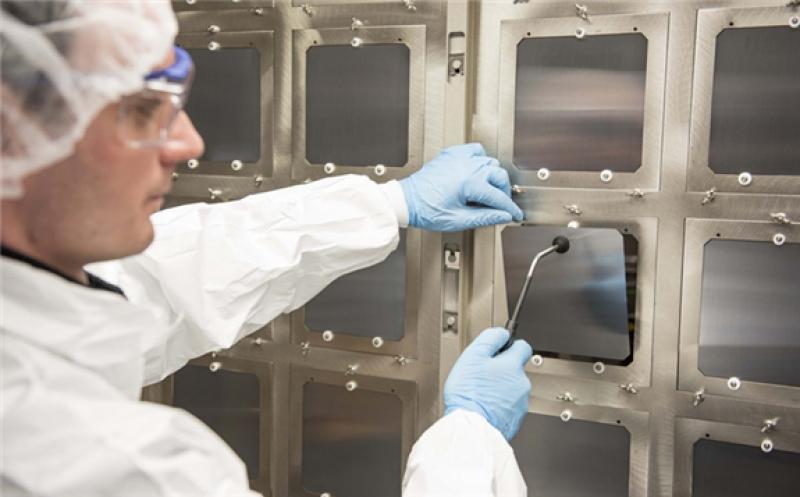 The new record was achieved on a cell measuring 1.12cm², produced in a laboratory setting. Oxford PV previously held the tandem cell efficiency record at 27.3%, and then 28%, before a group at Helmholtz Zentrum Berlin (HZB) pushed the record to 29.15% in January 2020. Both Oxford PV and HZB have stated that they have clear roadmaps to push this record beyond 30% in the near future.

“Achieving another world record is a fantastic milestone for our perovskite-based solar cell, as it demonstrates that we are one step closer to the provision of highly powerful and lower-cost solar energy,” said Oxford PV CEO Frank Averdung. “We are currently at a global tipping point -climate change is dramatically worsening and the need to use alternative forms of energy has never been greater.”

Oxford PV is in the process of ramping up the production of perovskite-silicon cells and modules at its facility in Germany. It is now targeting large-scale production in 2022, stating that due to the ongoing Covid-19 pandemic, delays in shipping equipment and work on the site have forced them to push back a previously targeted launch in mid-2021.

The company notes that although its new record-breaking cell was produced in laboratory conditions, it utilizes similar materials and processes to those it will use in mass production, and expects much of its research to be transferable.

And in further validation of its approach, Oxford PV now reports that its technology, although not in full size 60 cell module form, has been shown to meet industry standards for reliability in external testing. “Our solar cells and modules not only demonstrate record efficiency but have passed externally measured industry-standard reliability tests from the International Electrotechnical Commission.

The considerable progress we have made is thanks to our dedicated and skilled scientists and engineers in the UK and a validation of the entire global perovskite research community who have been contributing to making perovskite successful,” said Oxford PV CTO Chris Case. “Our innovative approach is a breakthrough for solar power efficiency and will be instrumental in paving the way for an all-electric future.”