A research team from the Skoltech Center for Design, Manufacturing and Materials (CDMM) has prepared a comprehensive overview of research on a family of sulfonimide dendrimers that hold promise for optics, photonics, and surface functionalization of materials.

The paper titled “Sulfonimide-Based Dendrimers: Progress in Synthesis, Characterization, and Potential Applications” was published in the Polymers journal.

There are over 50 dendrimer families, of which some are well studied and amply described in the literature. Some dendrimers are already marketed under various brand names and used in medical applications, while others, such as sulfonimide dendrimers, show great potential for further research and application.

Sulfonimide dendrimers are chemically stable, crystalline, and non-toxic, and have a high melting point (120-250 °C) and a high glass transition temperature (135-162 °C). Besides, they are biologically compatible with the human body, which makes them promising drug carriers and contrast agents.

Their most remarkable advantage is that their desired properties are easily attained by making the right design and attaching various functional chemical groups onto a dendrimer’s surface. Thanks to their valuable properties and easy modification, dendrimers can be used in organic synthesis, materials science, and biomedical chemistry. 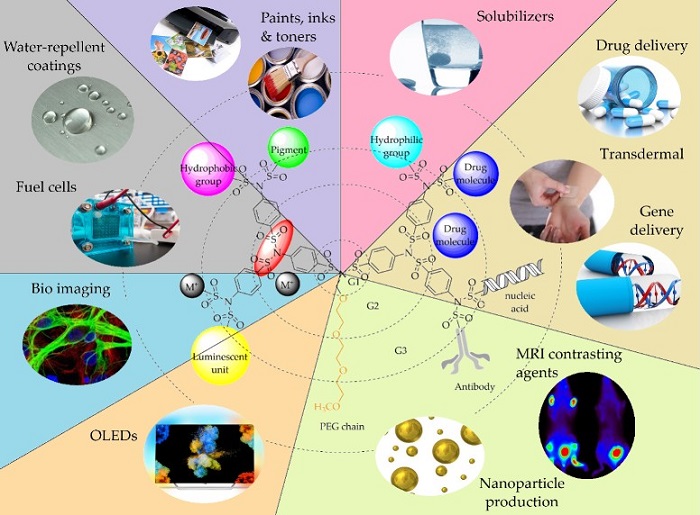 “Thus far, literary sources describing sulfonimide dendrimers or sulfonimides have been desultory and poorly structured,” says Julia Bondareva, a junior research scientist at CDMM. “Our review leverages the findings of my research supervisor, Dr. Oleg Lukin, and summarizes over 100 papers, most of which focus on the advances in the synthesis, characterization, and application of sulfonimide dendrimers. The purpose of this review is to draw attention to this promising type of dendrimers and the associated challenges and limitations that are yet to overcome.”

The scientists have gathered and organized all the data available on sulfonimide dendrimers and provided a full description of all the existing synthesis and characterization techniques for this type of dendrimers. Also, they presented all the dendrimer varieties known today with regard to their functionalization and shapes and described their properties and possible applications, ranging from biomedicine to materials science.

“We expect that our paper will bring researchers up to speed as regards the state of the art in the synthesis and applications of sulfonimide dendrimers, while inspiring them to use these dendrimers for creating new molecules with enhanced properties, thereby setting the stage for the design of new materials and technologies,” Julia Bondareva adds.