An atypical two-dimensional sandwich has the tasty part on the outside for scientists and engineers developing multifunctional nanodevices.

An atom-thin layer of semiconductor antimony paired with ferroelectric indium selenide would display unique properties depending on the side and polarization by an external electric field.

The field could be used to stabilize indium selenide’s polarization, a long-sought property that tends to be wrecked by internal fields in materials like perovskites but would be highly useful for solar energy applications.

Calculations by Rice materials theorist Boris Yakobson, lead author and researcher Jun-Jie Zhang and graduate student Dongyang Zhu shows switching the material’s polarization with an external electric field makes it either a simple insulator with a band gap suitable for visible light absorption or a topological insulator, a material that only conducts electrons along its surface. 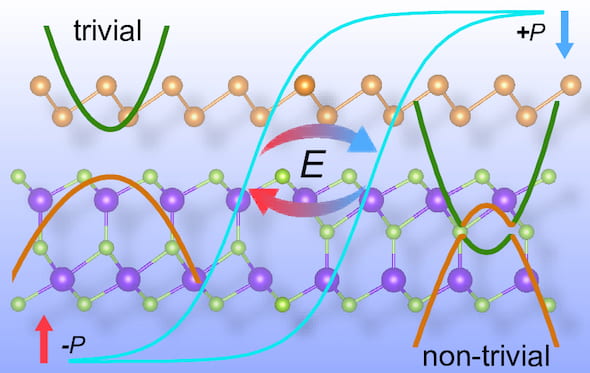 Rice University materials theorists show how a unique two-dimensional compound of antimony and indium selenide can have distinct properties on each side, depending on polarization by an external electric field. The figure indicates that two states for nonvolatile memory devices can be flipped by the polarization of the ferroelectric layer. Illustration by Jun-Jie Zhang

Turning the field inward would make the material good for solar panels. Turning it outward could make it useful as a spintronic device for quantum computing.

“The ability to switch at will the material’s electronic band structure is a very attractive knob,” Yakobson said. “The strong coupling between ferroelectric state and topological order can help: the applied voltage switches the topology through the ferroelectric polarization, which serves as an intermediary. This provides a new paradigm for device engineering and control.”

Weakly bound by the van der Waals force, the layers change their physical configuration when exposed to an electric field. That changes the compound’s band gap, and the change is not trivial, Zhang said.

“The central selenium atoms shift along with switching ferroelectric polarization,” he said. “This kind of switching in indium selenide has been observed in recent experiments.”

Unlike other structures proposed and ultimately made by experimentalists — boron buckyballs are a good example — the switching material may be relatively simple to make, according to the researchers.

“As opposed to typical bulk solids, easy exfoliation of van der Waals crystals along the low surface energy plane realistically allows their reassembly into heterobilayers, opening new possibilities like the one we discovered here,” Zhang said.

Yakobson is the Karl F. Hasselmann Professor of Materials Science and NanoEngineering and a professor of chemistry at Rice.

The Army Research Office, the Office of Naval Research and the Robert Welch Foundation supported the research.

Rice University materials theorists show how a unique two-dimensional compound of antimony and indium selenide can have distinct properties on each side, depending on polarization by an external electric field, with possible applications in solar energy and quantum computing. The figure indicates that two states for nonvolatile memory devices can be flipped by the polarization of the ferroelectric layer. (Credit: Jun-Jie Zhang/Rice University)