Rice University engineers are turning carbon monoxide directly into acetic acid — the widely used chemical agent that gives vinegar its tang — with a continuous catalytic reactor that can use renewable electricity efficiently to turn out a highly purified product.

The electrochemical process by the labs of chemical and biomolecular engineers Haotian Wang and Thomas Senftle of Rice’s Brown School of Engineering resolves issues with previous attempts to reduce carbon monoxide (CO) into acetic acid. Those processes required additional steps to purify the product.

The environmentally friendly reactor uses nanoscale cubes of copper as the primary catalyst along with a unique solid-state electrolyte.

In 150 hours of continuous lab operation, the device produced a solution that was up to 2% acetic acid in water. The acid component was up to 98% pure, far better than that produced through earlier attempts to catalyze CO into liquid fuel. Details appear in the Proceedings of the National Academy of Sciences. 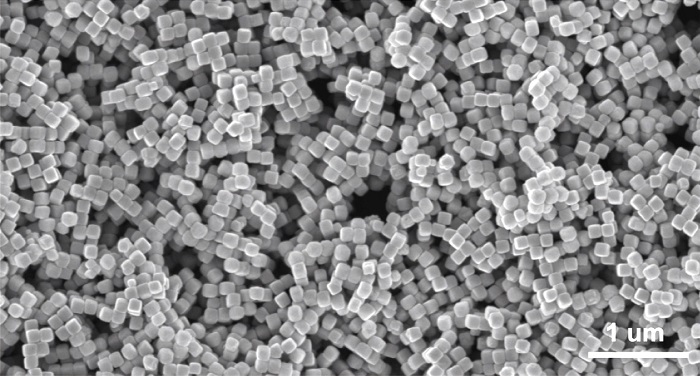 Along with vinegar and other foods, acetic acid is used as an antiseptic in medical applications; as a solvent for ink, paint and coatings; and in the production of vinyl acetate, a precursor to common white glue.

The Rice process builds upon the Wang lab’s reactor to produce formic acid from carbon dioxide (CO2). That research established an important foundation for Wang, recently named a Packard Fellow, to win a $2 million National Science Foundation (NSF) grant to continue exploring the conversion of greenhouse gases into liquid fuels.

“Acetic acid is typically not synthesized, of course, from CO or CO2,” Senftle added. “That’s the key here: We’re taking waste gases we want to mitigate and turning them into a useful product.” 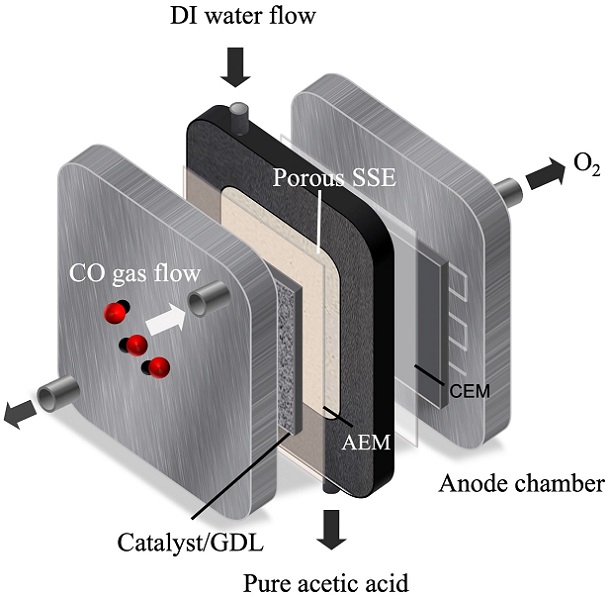 Rice University engineers have developed a reactor to produce liquid acetic acid directly from carbon monoxide. The reactor uses a catalyst of copper nanocubes and a solid-state electrolyte.

It took a careful coupling between the copper catalyst and solid electrolyte, the latter carried over from the formic acid reactor. “Sometimes copper will produce chemicals along two different pathways,” Wang said. “It can reduce CO into acetic acid and alcohols. We engineered copper cubes dominated by one facet that can help this carbon-carbon coupling, with edges that direct the carbon-carbon coupling towards acetic acid instead of other products.”

Computational models by Senftle and his team helped refine the cubes’ form factor. “We were able to show there are types of edge on the cube, basically more corrugated surfaces, that facilitate breaking certain C-O bonds that steer the products one way or the other,” he said. “Having more edge sites favors breaking the right bonds at the right time.”

Senftle said the project was a great demonstration of how theory and experiment should mesh. “It’s a nice example of engineering on many levels, from integration of the components in a reactor all the way down to the mechanism at the atomistic level,” he said. “It fits with the themes of molecular nanotechnology, showing how we can scale it up to real-world devices.”

The next step in development of a scalable system is to improve upon the system’s stability and further reduce the amount of energy the process requires, Wang said.

Turning CO2 and Wastewater into Something Useful, with Support from a Fan

Graphene Project ‘to Give World Access to Safe Drinking Water’

Mystery of the Nanobubbles Solved