A team led by University of Minnesota Twin Cities researchers has discovered a groundbreaking one-step process for creating materials with unique properties, called metamaterials. Their results show the realistic possibility of designing similar self-assembled structures with the potential of creating “built-to-order” nanostructures for wide application in electronics and optical devices.

The research was published and featured on the cover of Nano Letters, a peer-reviewed scientific journal published by the American Chemical Society.

In general, metamaterials are materials made in the lab to provide specific physical, chemical, electrical, and optical properties otherwise impossible to find in naturally occurring materials. These materials can have unique properties which make them ideal for a variety of applications from optical filters and medical devices to aircraft soundproofing and infrastructure monitoring. Usually these nano-scale materials are painstakingly produced in a specialized clean room environment over days and weeks in a multi-step fabrication process. 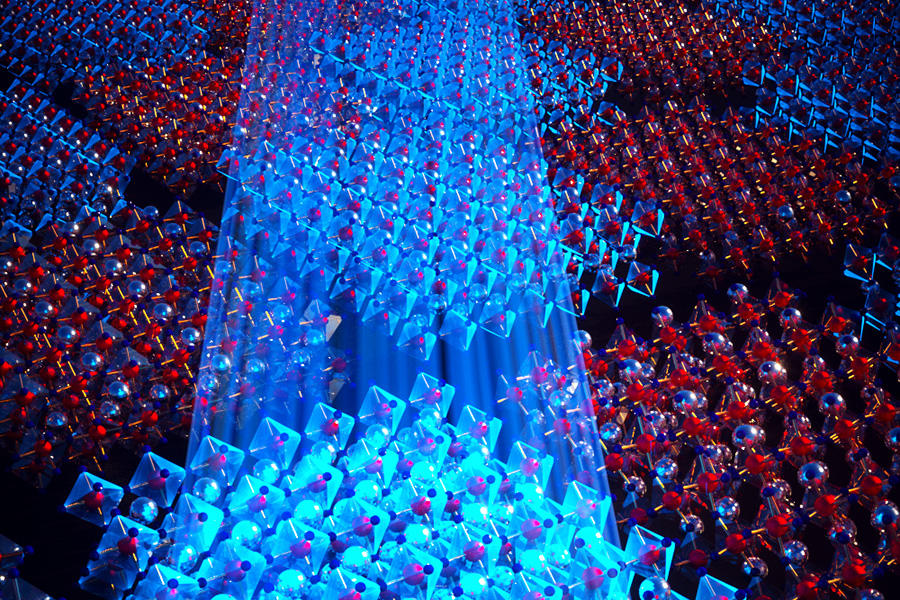 While studying a thin-film material called strontium stannate (SrSnO3), University of Minnesota researchers noticed the surprising formation of checker-board patterns at the nano scale similar to structures fabricated in costly, multistep processes. Their results show the realistic possibility of designing similar self-assembled structures with wide applications in materials for electronics and optical devices.

In this new research, a University of Minnesota team was studying a thin-film material called strontium stannate or SrSnO3. During their research, they noticed the surprising formation of checkerboard patterns at the nano scale similar to the metamaterial structures fabricated in the costly, multistep process.

“At first we thought this must be a mistake, but soon realized that the periodic pattern is a mixture of two phases of the same material with different crystal structures” said Bharat Jalan, the senior author of the study and an expert in material synthesis who is the Shell Chair in the University of Minnesota’s Department of Chemical Engineering and Materials Science. “After consulting with colleagues at the University of Minnesota, University of Georgia, and City University of New York, we realized that we may have discovered something quite special that can potentially have some unique applications.”

The material had spontaneously organized into an ordered structure as it changed from one phase to another. During what is called a “first-order structural phase transition” process, the material moved into a mixed-phase in which some parts of the system completed the transition and others did not.

“These nanoscale periodic patterns are the direct consequence of the first-order structural phase transition in this material,” said University of Minnesota aerospace engineering and mechanics Professor Richard James, a co-author of the study and a Distinguished McKnight University Professor. “For the first time, our work enables a host of possibilities for utilizing reversible structural phase transformations with nanoelectronic and photonic systems.”

In fact, the team demonstrated a process for the first-ever, self-assembled, tunable nanostructure to create metamaterials in just one step. The researchers were able to tune the ability to store electrical charge property within a single film using temperature and laser wavelength. They effectively created a variable photonic crystal material with 99 percent efficiency.

Using high-resolution electron microscopes, the researchers confirmed the unique structure of the material.

“We observed that the boundaries between these crystallographic phases were sharply defined at the atomic scale, which is remarkable for a self-assembled process,” said Professor Andre Mkhoyan, a co-author of the study, an expert in advanced electron microscopy, and the Ray D. and Mary T. Johnson/Mayon Plastics Chair in the Department of Chemical Engineering and Materials Science at the University of Minnesota.

The researchers are now looking to future applications for their discovery in optical and electronic devices.

“When we started this research, we never thought about these applications. We were driven by the fundamental study of the physics of the material,” Jalan said. “Now, all of a sudden, we seem to have opened up a completely new area of research, which is driven by the possibility of many new and exciting applications.”

Read the original article on University of Minnesota.