Pyrolyzed plastic ash is worthless, but perhaps not for long. Rice University scientists have turned their attention to Joule heating of the material, a byproduct of plastic recycling processes. A strong jolt of energy flashes it into graphene.

The technique by the lab of Rice chemist James Tour produces turbostratic graphene flakes that can be directly added to other substances like films of polyvinyl alcohol (PVA) that better resist water in packaging and cement paste and concrete, dramatically increasing their compressive strength. The research appears in the journal Carbon.

Like the flash graphene process the lab introduced in 2019, pyrolyzed ash turns into turbostratic graphene. That has weak attractive interactions between the flakes, making it easier to mix them into solutions.

Last October, the Tour lab reported on a process to convert waste plastic into graphene. The new process is even more specific, turning plastic that is not recovered by recycling into a useful product. 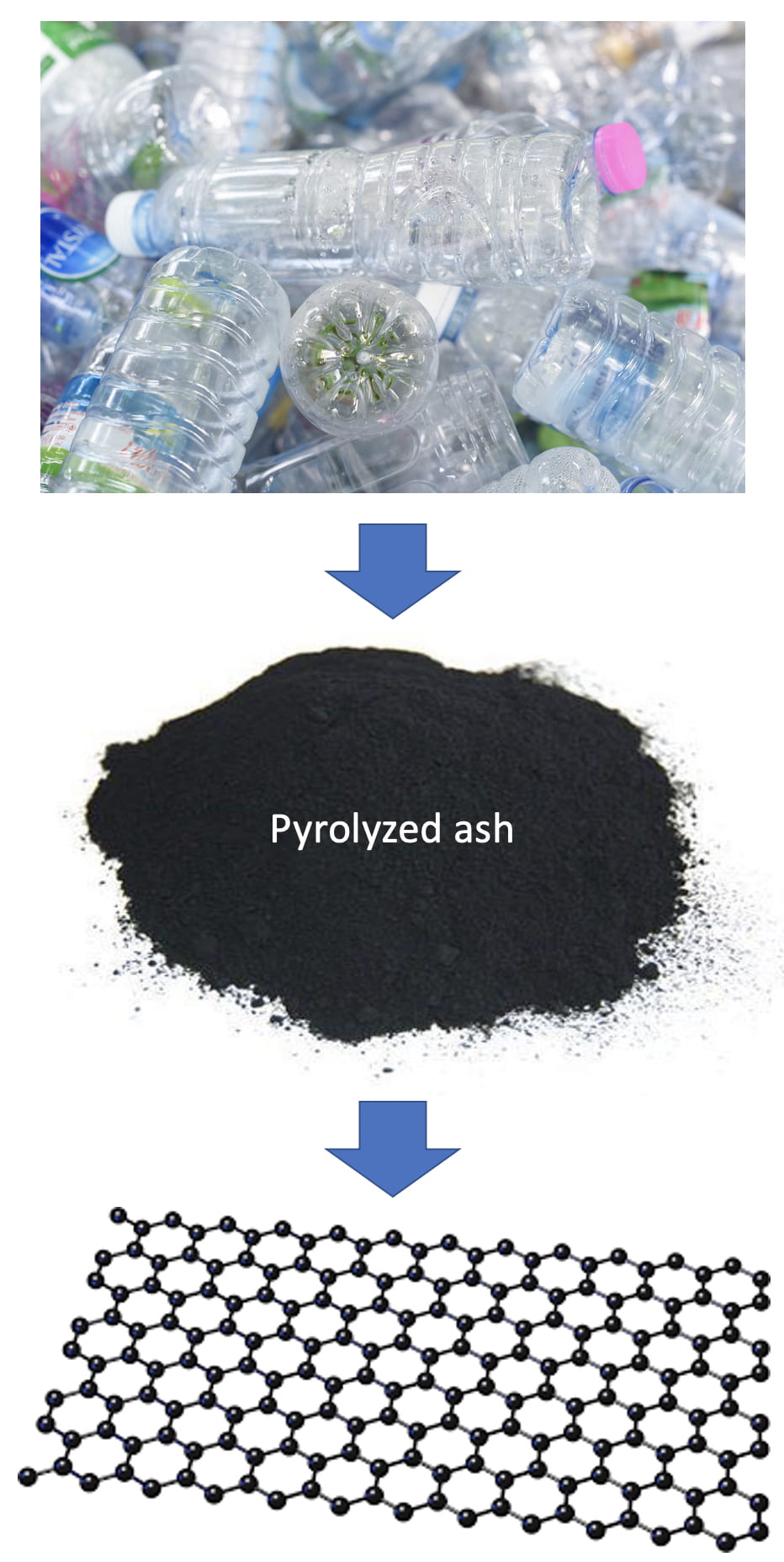 Rice University chemists turned otherwise-worthless pyrolyzed ash from plastic recycling into graphene through a Joule heating process. The graphene could be used to strengthen concrete and toughen plastics used in medicine, energy, and packaging applications.

“This work enhances the circular economy for plastics,” Tour said. “So much plastic waste is subject to pyrolysis in an effort to convert it back to monomers and oils. The monomers are used in repolymerization to make new plastics, and the oils are used in a variety of other applications.  But there is always a remaining 10% to 20% ash that’s valueless and is generally sent to landfills.

“Now we can convert that ash into flash graphene that can be used to enhance the strength of other plastics and construction materials,” he said.

Pyrolysis involves heating a material to break it down without burning it. The products of pyrolyzed, recycled plastic include energy-rich gases, fuel oils, waxes, naphtha, and virgin monomers from which new plastic can be produced. But the rest — an estimated 50,000 metric tons in the United States per year - is discarded.

“Recyclers do not turn large profits due to cheap oil prices, so only about 15% of all plastic gets recycled,” said Rice graduate student Kevin Wyss, lead author of the study. “I wanted to combat both of these problems.”

The researchers ran a pair of experiments to test the flashed ash, first mixing the resulting graphene with PVA, a biocompatible polymer being investigated for medical applications, fuel cell polymer electrolyte membranes, and environmentally friendly packaging. It has been held back by the base material’s poor mechanical properties and vulnerability to water.

Adding as little as 0.1% of graphene increases the amount of strain the PVA composite can handle before failure by up to 30%, they reported. It also significantly improves the material’s resistance to water permeability.

In the second experiment, they observed significant increases in compressive strength by adding graphene from ash to Portland cement and concrete. Stronger concrete means less concrete needs to be used in structures and roads. That curtails energy use and cuts pollutants from its manufacture.