Study co-led by Berkeley Lab and Columbia Engineering could lead to simple, high-resolution bioimaging in real time by overcoming a fundamental property of light.

Since the earliest microscopes, scientists have been on a quest to build instruments with finer and finer resolution to image a cell’s proteins – the tiny machines that keep cells, and us, running. But to succeed, they need to overcome the diffraction limit, a fundamental property of light that long prevented optical microscopes from bringing into focus anything smaller than half the wavelength of visible light (around 200 nanometers or billionths of a meter) – far too big to explore many of the inner-workings of a cell.

For over a century, scientists have experimented with different approaches – from intensive calculations to special lasers and microscopes – to resolve cellular features at ever smaller scales. And in 2014, scientists were awarded the Nobel Prize in Chemistry for their work in super-resolution optical microscopy, a groundbreaking technique that bypasses the diffraction limit by harnessing special fluorescent molecules, unusually shaped laser beams, or sophisticated computation to visualize images at the nanoscale.

Now, as reported in a cover article in the journal Nature, a team of researchers co-led by the U.S. Department of Energy’s Lawrence Berkeley National Laboratory (Berkeley Lab) and Columbia University’s Fu Foundation School of Engineering and Applied Science (Columbia Engineering) has developed a new class of crystalline material called avalanching nanoparticles (ANPs) that, when used as a microscopic probe, overcomes the diffraction limit without heavy computation or a super-resolution microscope.

From left: Experimental images of thulium-doped avalanching nanoparticles separated by 300 nanometers; at right, simulations of the same material.

The researchers say that the ANPs will advance high-resolution, real-time bio-imaging of a cell’s organelles and proteins, as well as the development of ultrasensitive optical sensors and neuromorphic computing that mimics the neural structure of the human brain, among other applications.

“These nanoparticles make every simple scanning confocal microscope into a real-time super-resolution microscope, but what they do isn’t exactly super-resolution. They actually make the diffraction limit much lower,” but without the process-heavy computation of previous techniques, said co-author Bruce Cohen, a staff scientist in Berkeley Lab’s Molecular Foundry and Molecular Biophysics & Integrated Bioimaging Division. Scanning confocal microscopy is a technique that produces a magnified image of a specimen, pixel by pixel, by scanning a focused laser across a sample.

The photon avalanching nanoparticles described in the current study are about 25 nanometers in diameter. The core contains a nanocrystal doped with the lanthanide metal thulium, which absorbs and emits light. An insulating shell ensures that the part of the nanoparticle that’s absorbing and emitting light is far from the surface and doesn’t lose its energy to its surroundings, making it more efficient, explained co-author Emory Chan, a staff scientist in Berkeley Lab’s Molecular Foundry.

But to the researchers’ delight, the ANPs described in the current study met each doubling of exciting laser intensity with an increase of emitted light by nearly 80-million-fold. In the world of optical microscopy, that is a dazzling degree of nonlinear emission. And since the study’s publication, “we actually have some better ones now,” Cohen added.

The researchers might not have considered thulium’s potential for photon avalanching if it weren’t for Chan’s study in 2016, which calculated the light-emitting properties of hundreds of combinations of lanthanide dopants when stimulated by 1,064-nanometer near-infrared light. “Surprisingly, thulium-doped nanoparticles were predicted to emit the most light, even though conventional wisdom said that they should be completely dark,” noted Chan.

According to the researchers’ models, the only way that thulium could be emitting light is through a process called energy looping, which is a chain reaction in which a thulium ion that has absorbed light excites neighboring thulium ions into a state that allows them to better absorb and emit light.

Those excited thulium ions, in turn, make other neighboring thulium ions more likely to absorb light. This process repeats in a positive feedback loop until a large number of thulium ions are absorbing and emitting light. 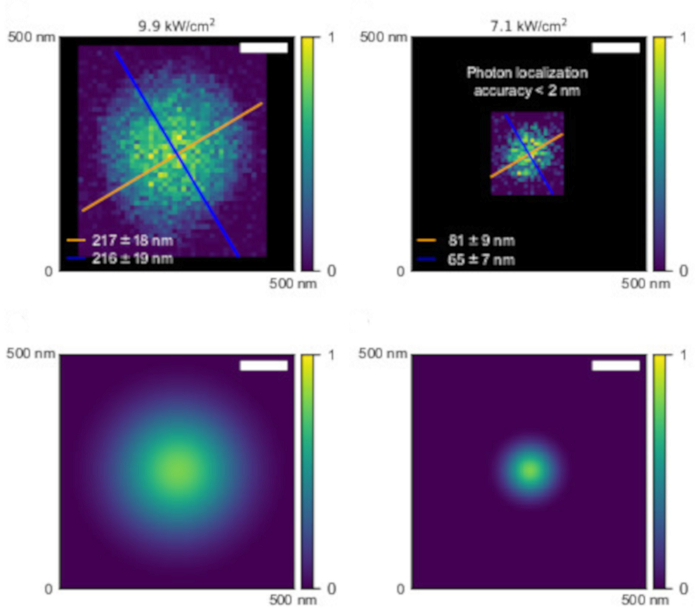 “It’s like placing a microphone close to a speaker – the feedback caused by the speaker amplifying its own signal blows up into an obnoxiously loud sound. In our case, we are amplifying the number of thulium ions that can emit light in a highly nonlinear way,” Chan explained. When energy looping is extremely efficient, it is called photon avalanching since a few absorbed photons can cascade into the emission of many photons, he added.

At the time of the 2016 study, Chan and colleagues hoped that they might see photon avalanching experimentally, but the researchers weren’t able to produce nanoparticles with sufficient nonlinearity to meet the strict criteria for photon avalanching until the current study.

To produce avalanching nanoparticles, the researchers relied on the Molecular Foundry’s nanocrystal-making robot WANDA (Workstation for Automated Nanomaterial Discovery and Analysis) to fabricate many different batches of nanocrystals doped with different amounts of thulium and coated with insulating shells. “One of the ways we were able to achieve such great photon-avalanching performance with our thulium nanoparticles was by coating them with very thick, nanometer-scale shells,” said Chan, who co-developed WANDA in 2010.

Growing the shells is an exacting process that can take up to 12 hours, he explained. Automating the process with WANDA allowed the researchers to perform other tasks while ensuring a uniformity of thickness and composition among the shells, and to fine-tune the material’s response to light and resolution power.

Harnessing an avalanche at the nanoscale

Scanning confocal microscopy experiments led by co-author P. James Schuck, an associate professor of mechanical engineering at Columbia Engineering who was a senior scientist in Berkeley Lab’s Molecular Foundry, showed that nanoparticles doped with moderately high concentrations of thulium exhibited nonlinear responses greater than expected for photon avalanching, making these nanoparticles one of the most nonlinear nanomaterials known to exist.

The extreme nonlinearity of the avalanching nanoparticles allowed Schuck and Lee to excite and image single nanoparticles spaced closer than 70 nanometers apart. In conventional “linear” light microscopy, many nanoparticles are excited by the laser beam, which has a diameter of greater than 500 nanometers, making the nanoparticles appear as one large spot of light.

The authors’ technique – called photon avalanche single-beam super-resolution imaging (PASSI) – takes advantage of the fact that a focused laser beam spot is more intense in its center than on its edges, Chan said. Since the emission of the ANPs steeply increases with laser intensity, only the particles in the 70-nanometer center of the laser beam emit appreciable amounts of light, leading to the exquisite resolution of PASSI.

“That’s amazing. Usually in optical science, you have to use really intense light to get a large nonlinear effect – and that’s no good for bioimaging because you’re cooking your cells with that power of light,” said Schuck, who has continued his collaborative research at the Molecular Foundry as a user. “But with these thulium-doped nanoparticles, we’ve shown that they don’t require that much input intensity to get a resolution that’s less than 70 nanometers. Normally, with a scanning confocal microscope, you’d get 300 nanometers. That’s a pretty good improvement, and we’ll take it, especially since you’re getting super-resolution images essentially for free.”

Now that they have successfully lowered the diffraction limit with their photon avalanching nanoparticles, the researchers would like to experiment with new formulations of the material to image living systems, or detect changes in temperature across a cell’s organelle and protein complex.

“Observing such highly nonlinear phenomena in nanoparticles is exciting because nonlinear processes are thought to pattern structures like stripes in animals and to produce periodic, clocklike behavior,” Chan noted. “Nanoscale nonlinear processes could be used to make tiny analog-to-digital converters, which may be useful for light-based computer chips, or they could be used to concentrate dim, uniform light into concentrated pulses.”

“These are such unusual materials, and they’re brand new. We hope that people will want to try them with different microscopes and different samples, because the great thing about basic science discoveries is that you can take an unexpected result and see your colleagues run with it in exciting new directions,” Cohen said.