A New Regime for Analyzing Properties of Topological Materials

A pair of new studies demonstrates that two metal alloys, cobalt monosilicide and rhodium monosilicide, are able convert light into electric current efficiently thanks to their topology. This fundamental research could provide a new approach for developing devices such as photo detectors and solar cells in the future.

Two recent studies demonstrate that there is a topological origin of two related metal alloys’ ability to convert light into electrical current. New fundamental research on rhodium monosilicide (RhSi), published in NPJ Quantum Materials, and on cobalt monosilicide (CoSi), published in Nature Communications, could provide a new approach for developing devices such as photo detectors and solar cells.

Wu and his lab are working on a number of projects involving topological materials, whose underlying theories were pioneered by Charlie Kane and Eugene Mele, the 2019 Breakthrough Prize in Fundamental Physics winners. The goal of Wu and other researchers in this field is to use these theories to study and develop topological materials for new applications and devices.

The group’s most recent findings are focused on ways to convert light into electric current through a better understanding of the relationship between photocurrent and topology. While there had been experiments conducted on CoSi and RhSi before, what helped the team gain new insights was the use of terahertz emission spectroscopy. This involves shining submillimeter pulses of light to study a material’s response within the mid-infrared regime.

“Because we pushed into this regime, we were able to show that the photogalvanic effect in CoSi was topological,” says Wu. “By doing a careful analysis, we can measure the photo response that a theory can calculate, so we can compare the magnitude of the response between experiment and theory, and that was not done in the past.” 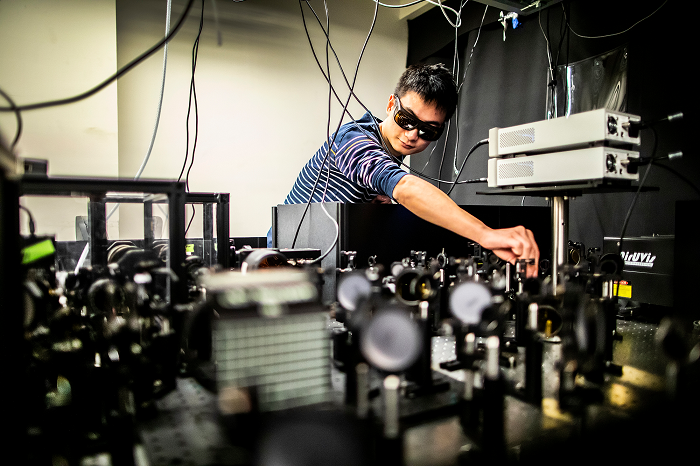 A pair of studies demonstrates how two related metal alloys, cobalt monosilicide and rhodium monosilicide, can convert light into electric current efficiently thanks to their topology.

The researchers found that both CoSi and RhSi’s photocurrents were purely topological in origin, although in RhSi this response was less pronounced. The conclusion in RhSi applies at much lower photon energy than previous theories predicted, which could be due to the presence of more defects in this compound.

“These materials are predicted to have a particular topological structure in their band structure, but really the grail here is to try to associate that with some experimental observable,” says Mele, a co-author on the Nature Communications paper. “In the first couple of years of this field, there were attempts to do this, and I think Liang’s work is really the most careful work that lays out exactly what it is you need to see that phenomenon.”

In addition to its topological origin, what was also interesting to Wu was how high the photo-current of CoSi in the mid-infrared regime was higher than what had previously been observed in other types of materials with chiral structures. This is something that might enable new approaches for making devices, such as photo detectors, that can work in this regime.

“This study will potentially enable new electronic-device concepts based on these emerging topological materials that consume less power, are more energy efficient, and ultimately lead to new electronic systems with improved size, weight, and power for the U.S. Army,” says Joe Qiu, program manager at the Army Research Office, which funded this research.

Through their latest findings, Wu and his team now have the experimental procedures and analytical methods in place to study other types of materials and phenomena that could be relevant for materials science and engineering applications. “And for materials with less disorder, it also may have some application in, for example, solar cells,” says graduate student Zhuoliang Ni, co-first author of both studies, about how these results could help researchers find ways to enhance an existing material’s photoconductivity.

By using a combination of both experiment and theory, these results also have further implications for improving topological materials for more widespread use in the future. “This is an experimental demonstration people are trying to associate with a topological character that may well be in the observed properties if we can make the materials a little better, and I think that’s really being done here for the first time,” says Mele. “Right now, the materials aren’t quite there, but it looks like they could be. And that is a pretty amazing idea.”