Zebra Stripes, Leopard Spots and other Patterns on The Skin of Frozen Metal Alloys That Defy Conventional Metallurgy

“Stripy zebra, spotty leopard, …”. Kids never become bored pinpointing animals based on their unique body patterns. While it is fascinating that living creatures develop distinct patterns on their skin, what may be even more mysterious is their striking similarity to the skin of frozen liquid metals.

Pattern formation is a classic example of one of nature’s wonders that scientists have pondered for centuries. Around 1952, the famous mathematician Alan Turing (father of modern computers) came up with a conceptual model to explain the pattern formation process of a two-substance system. Such patterns are also called Turing patterns thereafter.

Pattern formation is also commonly adopted by manmade systems and this is especially true in the field of metallurgy. It even has a sub-field called ‘metallography’, which specialises in the study of microscale patterns and compositions of metals and alloys. If you snap a multi-component alloy apart and take a look at its cross sections, there is a good chance that you will see alternating stripes or aligned spots of different metal components, just like a microscopic version of the patterns on the skin of a zebra or leopard. However, despite the ancient knowledge about the core of liquid metal alloys and their bulk solidification patterns, their surface pattern formation phenomenon has long been overlooked until now.

In a work published in the journal Nature Nanotechnology, researchers from the University of New South Wales (UNSW) Sydney and their collaborators from the University of Auckland (the MacDiarmid Institute), RMIT, and UCLA discovered that diverse types of patterns occur at the surface of solidified metal alloys. The team used two-component metallic mixes, such as gallium-based alloys containing small amounts of bismuth. These alloys easily melt in one’s hand and thus make experimental observation and control convenient.

“We could observe the surface solidification process under an ordinary optical microscope and I was astonished when I first saw a solidification front on the liquid metal surface creating solid patterns behind it,” said Dr. Jianbo Tang, the leading author of the work. “You can imagine the scene of a glacier moving across the ocean surface, but everything seen under our microscope is metallic and microscopic.” Dr. Tang added.

To see the finer details of the metallic glacier, electron microscopy was used, and the researchers observed a kaleidoscope of highly ordered patterns including alternating stripes, curved fibres, dot arrays, and some exotic stripe-dot hybrids. Surprisingly, the team found that, when these patterns are formed, the abundance of the low-concentration element bismuth at the surface region was much increased. Such surface enrichment found in this study defies conventional metallurgical understandings. 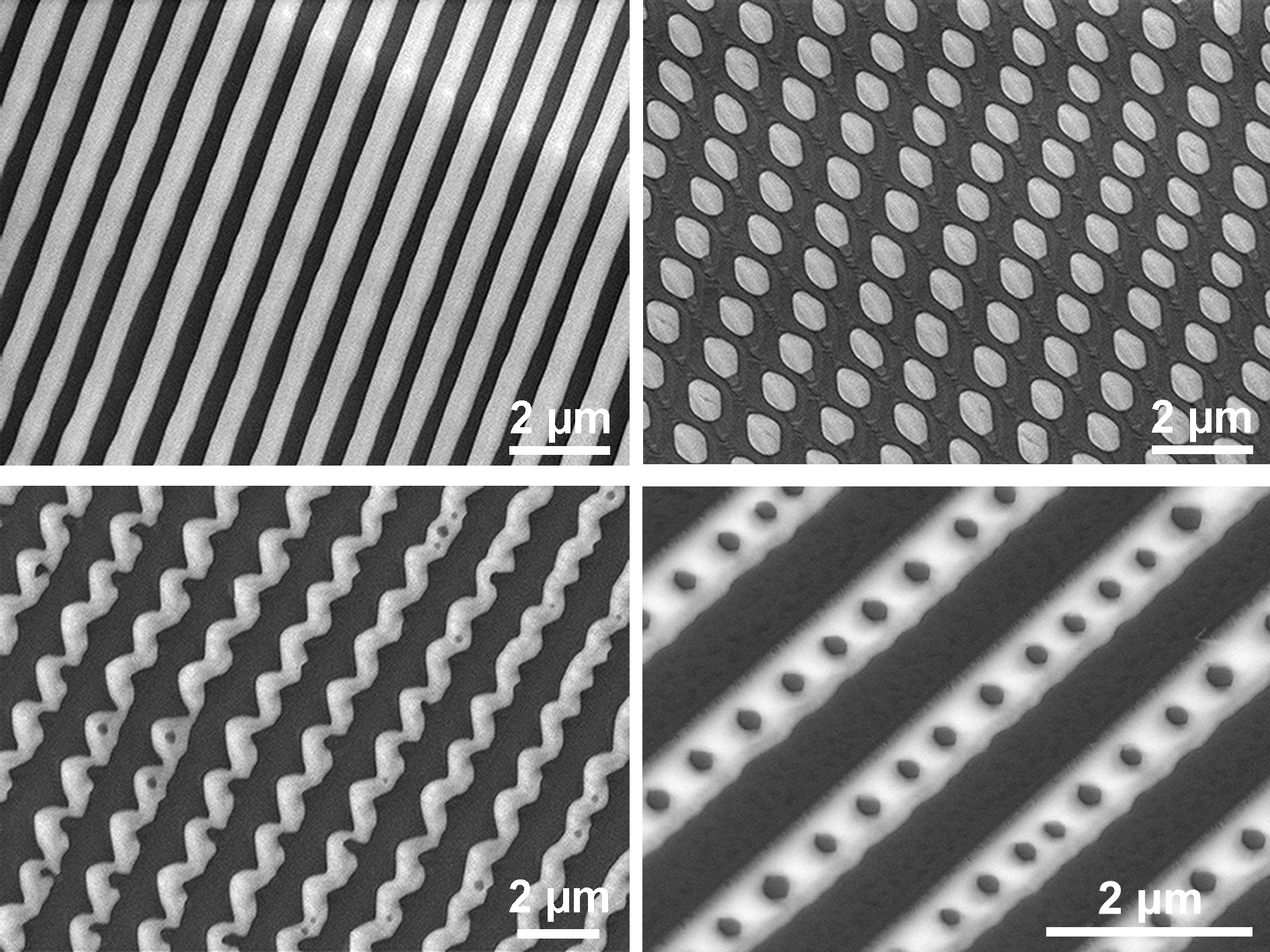 Stripes, dots, and other exotic patterns on the surface of liquid metal after solidification.

The researchers related the magic behind this newly observed solidification phenomenon to the unique surface structures of liquid metals and they also used super computers to simulate the process. In their computer simulations, the small-in-number bismuth atoms, seemingly moving around randomly in a sea of gallium atoms, were observed to accumulate at the alloy surface.

“This previously ignored surface solidification phenomenon improves our fundamental understanding of liquid metal alloys and their phase transition processes. In addition, this autonomous surface process can be used as a patterning tool for designing metallic structures and creating devices for advanced applications in future electronics and optics.” said Prof. Kourosh Kalantar-Zadeh, a corresponding author of the study.

The collaboration between UNSW and the MacDiarmid Institute for Advanced Materials and Nanotechnology was established by Australian Research Council (ARC) Centre of Excellence Future Low-Energy Electronics Technologies (FLEET).

Nanorobotics: What It Is, What It Can Do, and How It Can Become Reality