Researchers describe how to exploit DNA origami as a platform to build superconducting nanoarchitectures. The structures they built are addressable with nanometric precision that can be used as a template for 3D architectures that are not possible today via conventional fabrication techniques.

The quest for ever-smaller electronic components led an international group of researchers to explore using molecular building blocks to create them. DNA is able to self-assemble into arbitrary structures, but the challenge with using these structures for nanoelectronic circuits is the DNA strands must be converted into highly conductive wires.

Inspired by previous works using the DNA molecule as a template for superconducting nanowires, the group took advantage of a recent bioengineering advance known as DNA origami to fold DNA into arbitrary shapes. 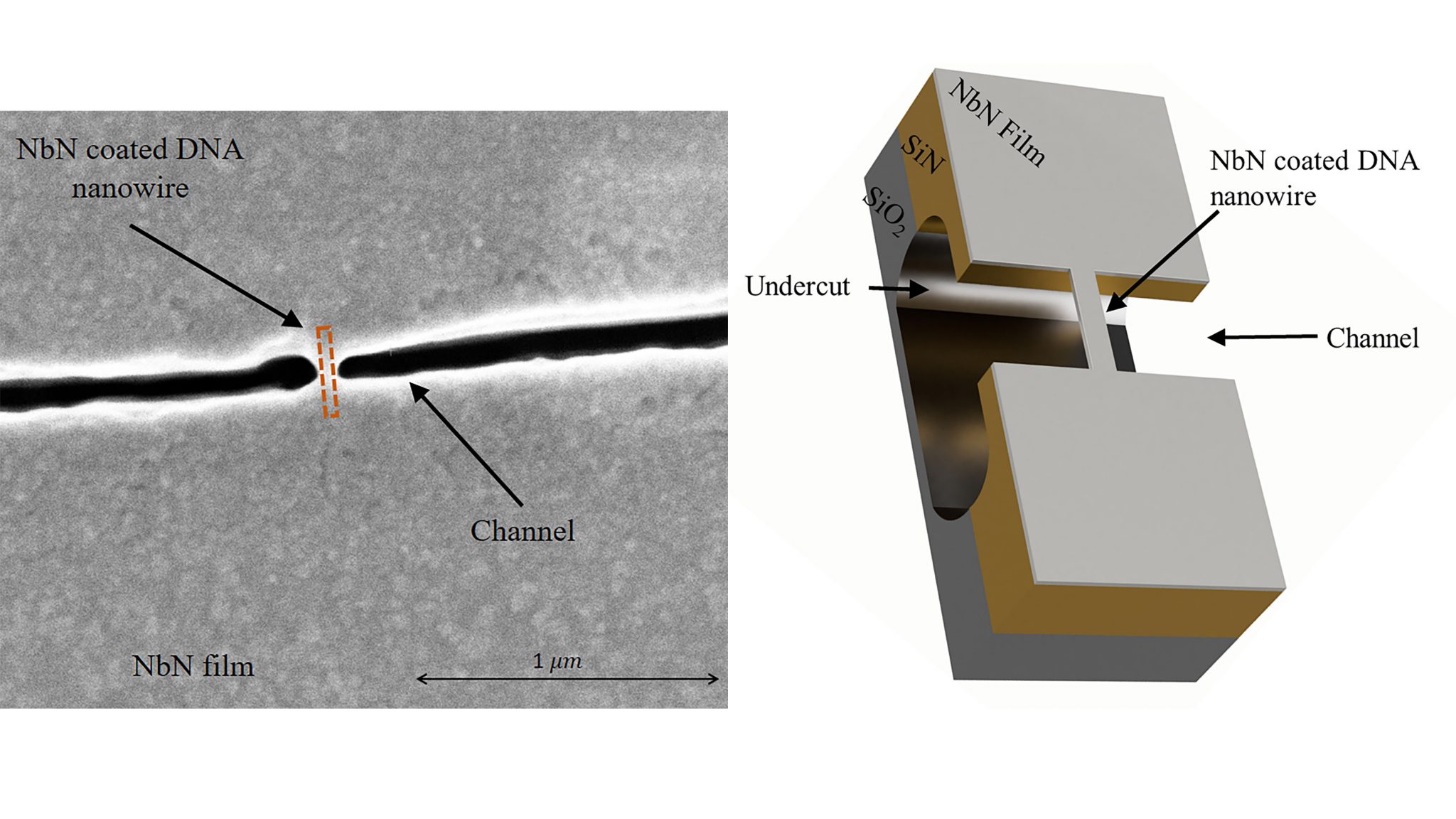 (left) Schematic illustration of a niobium nitrate-coated DNA nanowire suspended above a silicon nitride/silicon oxide channel. (right) High-resolution scanning electron microscope (HR-SEM) image of the channel (black in image) on which the DNA nanowire is suspended. In the image, the channel appears discontinuous, reflecting the DNA suspended across it (marked by dashed orange rectangle). The distance between the two sides of the channel is ~50 nanometers, and the width of the niobium nitrate-coated nanowire at its narrowest point is ~25 nanometers.

In AIP Advances, from AIP Publishing, researchers from Bar-Ilan University, Ludwig-Maximilians-Universität München, Columbia University, and Brookhaven National Laboratory describe how to exploit DNA origami as a platform to build superconducting nanoarchitectures. The structures they built are addressable with nanometric precision that can be used as a template for 3D architectures that are not possible today via conventional fabrication techniques.

The group’s fabrication process involves a multidisciplinary approach, namely the conversion of the DNA origami nanostructures into superconducting components. And the preparation process of DNA origami nanostructures involves two major components: a circular single-strand DNA as the scaffold, and a mix of complementary short strands acting as staples that determine the shape of the structure.

“In our case, the structure is an approximately 220-nanometer-long and 15-nanometer-wide DNA origami wire,” said Lior Shani, of Bar-Ilan University. “We dropcast the DNA nanowires onto a substrate with a channel and coat them with superconducting niobium nitride. Then we suspend the nanowires over the channel to isolate them from the substrate during the electrical measurements.”

The group’s work shows how to exploit the DNA origami technique to fabricate superconducting components that can be incorporated into a wide range of architectures.

“Superconductors are known for running an electric current flow without dissipations,” said Shani. “But superconducting wires with nanometric dimensions give rise to quantum fluctuations that destroy the superconducting state, which results in the appearance of resistance at low temperatures.” 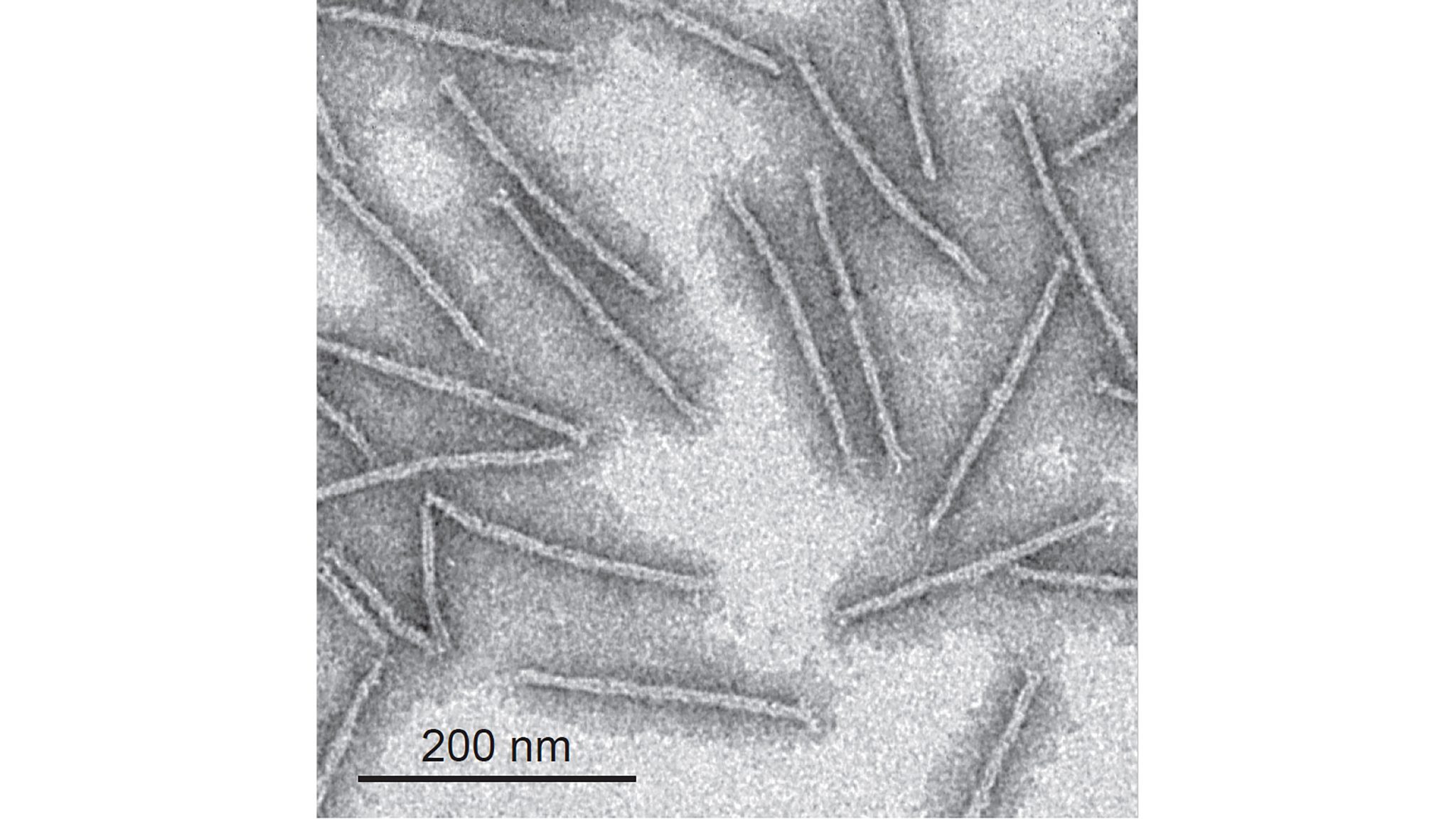 By using a high magnetic field, the group suppressed these fluctuations and reduced about 90% of the resistance.

“This means that our work can be used in applications like interconnects for nanoelectronics and novel devices based on exploitation of the flexibility of DNA origami in fabrication of 3D superconducting architectures, such as 3D magnetometers,” said Shani.