A Display That Completely Blocks Off Counterfeits

Despite the anticounterfeiting devices attached to luxury handbags, marketable securities, and identification cards, counterfeit goods are on the rise. There is a demand for the next-generation anticounterfeiting technology – that surpasses the traditional ones – that are not easily forgeable and can hold various data.

A POSTECH research team, led by Professor Junsuk Rho of the departments of mechanical engineering and chemical engineering, Ph.D. candidates Chunghwan Jung of the Department of Chemical Engineering and Younghwan Yang of the Department of Mechanical Engineering, have together succeeded in making a switchable display device using nanostructures that is capable of encrypting full-color images depending on the polarization of light. These findings were recently published in Nanophotonics.

The new device developed by the research team was produced with a microstructure about one thousand times thinner than a strand of hair which is called a metasurface. It is known that various colors can be expressed through a uniformly arranged microstructures within the metasurface. Because the microstructures produced this time have very small pixels, they boast high resolution (approximately 40,000 dpi) and wide viewing angle while being thin, which allows it to be produced in the form of stickers. 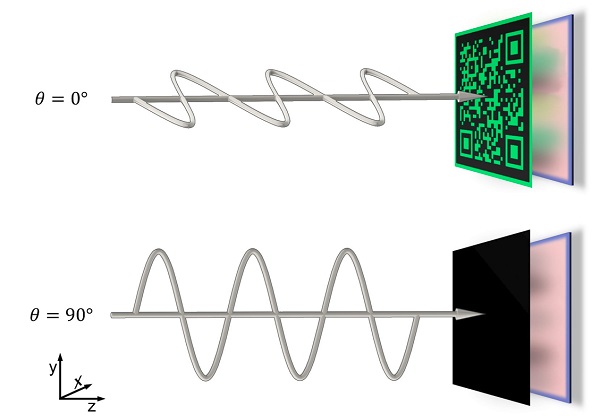 Schematic illustration of switchable metasurfaces Full-color image is switched on (top) and concealed (bottom) by the polarization angle (0° and 90°) of the incident light, making it applicable to cryptography.

In addition, unlike previous studies that focused on the expression of various colors, in this study, the on and off states can be adjusted according to the polarization of the incident light. This new device displays full-color images during the on state and shows no images in the off state.

Besides having the ability to turn on and turn off an image, the device can switch between different images. Specifically, by arranging three consecutive nanostructures, it achieves higher colorization rate than the previous studies. The researchers properly configured a total of 125 types of structures to encode a full-color image and proved through experiments that it completely turns off according to the polarization.

This feature can be utilized in real life as an anti-forgery device. For example, it can be designed into a security label that appears to be a simple color image to the naked eye, but reveals the serial number when a special filter is used. Moreover, by utilizing its ultrahigh resolution feature and inserting high-capacity data security algorithm, it can be used as a new security device that can replace the traditional labeling method.

Chunghwan Jung, the first author of the paper, commented, “This new device is practically impossible to forge because it requires an electron microscope with magnification capacity of several thousand and a nanometer-scale production equipment.”

“This device is an ultra-high-resolution device-type display that can turn on and turn off full-color images according to the polarization component of the incident light,” remarked the corresponding author Professor Junsuk Rho who led the study. “These displays can store multiple images simultaneously and can be applied to in optical cryptography.”