Researchers Construct Molecular Nanofibers That are Stronger than Steel

Self-assembly is ubiquitous in the natural world, serving as a route to form organized structures in every living organism. This phenomenon can be seen, for instance, when two strands of DNA — without any external prodding or guidance — join to form a double helix, or when large numbers of molecules combine to create membranes or other vital cellular structures. Everything goes to its rightful place without an unseen builder having to put all the pieces together, one at a time.

For the past couple of decades, scientists and engineers have been following nature’s lead, designing molecules that assemble themselves in water, with the goal of making nanostructures, primarily for biomedical applications such as drug delivery or tissue engineering. “These small-molecule-based materials tend to degrade rather quickly,” explains Julia Ortony, assistant professor in MIT's Department of Materials Science and Engineering (DMSE), “and they’re chemically unstable, too. The whole structure falls apart when you remove the water, particularly when any kind of external force is applied.”

She and her team, however, have designed a new class of small molecules that spontaneously assemble into nanoribbons with unprecedented strength, retaining their structure outside of water. The results of this multi-year effort, which could inspire a broad range of applications, were described on Jan. 21 in Nature Nanotechnology by Ortony and coauthors.

“This seminal work — which yielded anomalous mechanical properties through highly controlled self-assembly — should have a big impact on the field,” asserts Professor Tazuko Aida, deputy director for the RIKEN Center for Emergent Matter Science and professor of chemistry and biotechnology at the University of Tokyo, who was not involved in the research. 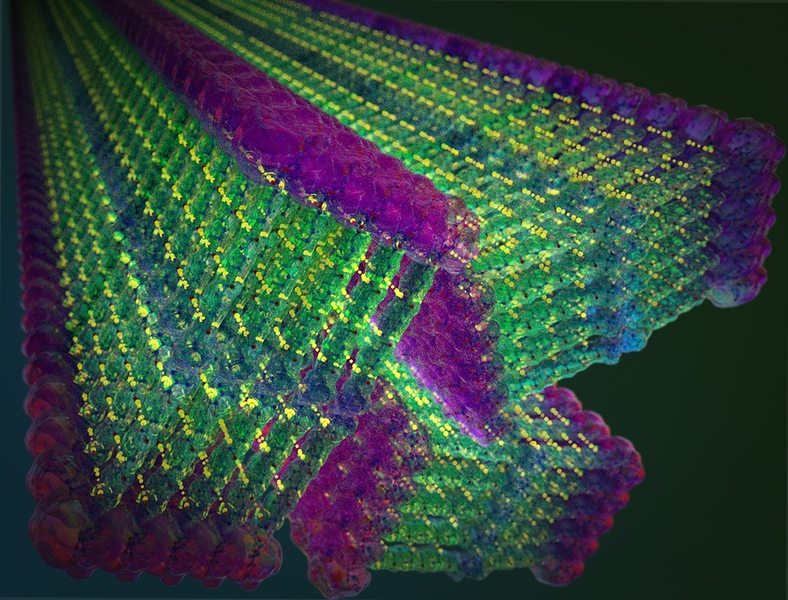 The material the MIT group constructed — or rather, allowed to construct itself — is modeled after a cell membrane. Its outer part is “hydrophilic,” which means it likes to be in water, whereas its inner part is “hydrophobic,” meaning it tries to avoid water. This configuration, Ortony comments, “provides a driving force for self-assembly,” as the molecules orient themselves to minimize interactions between the hydrophobic regions and water, consequently taking on a nanoscale shape.

The shape, in this case, is conferred by water, and ordinarily the whole structure would collapse when dried. But Ortony and her colleagues came up with a plan to keep that from happening. When molecules are loosely bound together, they move around quickly, analogous to a fluid; as the strength of intermolecular forces increases, motion slows and molecules assume a solid-like state. The idea, Ortony explains, “is to slow molecular motion through small modifications to the individual molecules, which can lead to a collective, and hopefully dramatic, change in the nanostructure’s properties.”

One way of slowing down molecules, notes Ty Christoff-Tempesta, a PhD student and first author of the paper, “is to have them cling to each other more strongly than in biological systems.” That can be accomplished when a dense network of strong hydrogen bonds join the molecules together. “That’s what gives a material like Kevlar — constructed of so-called ‘aramids’ — its chemical stability and strength,” states Christoff-Tempesta.

Ortony’s team incorporated that capability into their design of a molecule that has three main components: an outer portion that likes to interact with water, aramids in the middle for binding, and an inner part that has a strong aversion to water. The researchers tested dozens of molecules meeting these criteria before finding the design that led to long ribbons with nanometer-scale thickness. The authors then measured the nanoribbons’ strength and stiffness to understand the impact of including Kevlar-like interactions between molecules. They discovered that the nanoribbons were unexpectedly sturdy — stronger than steel, in fact.

This finding led the authors to wonder if the nanoribbons could be bundled to produce stable macroscopic materials. Ortony’s group devised a strategy whereby aligned nanoribbons were pulled into long threads that could be dried and handled. Notably, Ortony’s team showed that the threads could hold 200 times their own weight and have extraordinarily high surface areas — 200 square meters per gram of material. "This high surface-to-mass ratio offers promise for miniaturizing technologies by performing more chemistry with less material,” explains Christoff-Tempesta. To this end, they have already developed nanoribbons whose surfaces are coated with molecules that can pull heavy metals, like lead or arsenic, out of contaminated water. Other efforts in the research group are aimed at using bundled nanoribbons in electronic devices and batteries.

Ortony, for her part, is still amazed that they’ve been able to achieve their original research goal of “tuning the internal state of matter to create exceptionally strong molecular nanostructures.” Things could easily have gone the other way; these materials might have proved to be disorganized, or their structures fragile, like their predecessors, only holding up in water. But, she says, “we were excited to see that our modifications to the molecular structure were indeed amplified by the collective behavior of molecules, creating nanostructures with extremely robust mechanical properties. The next step, figuring out the most important applications, will be exciting.”

Riddle Solved: Why was Roman Concrete So Durable?

A Rough Start Can Lead to a Strong Bond