The Singapore University of Technology and Design (SUTD) and its research collaborators have successfully demonstrated the four-dimensional (4D) printing of shape memory polymers in submicron dimensions which are comparable to the wavelength of visible light. This novel development has allowed researchers to now explore new applications in the field of nanophotonics. 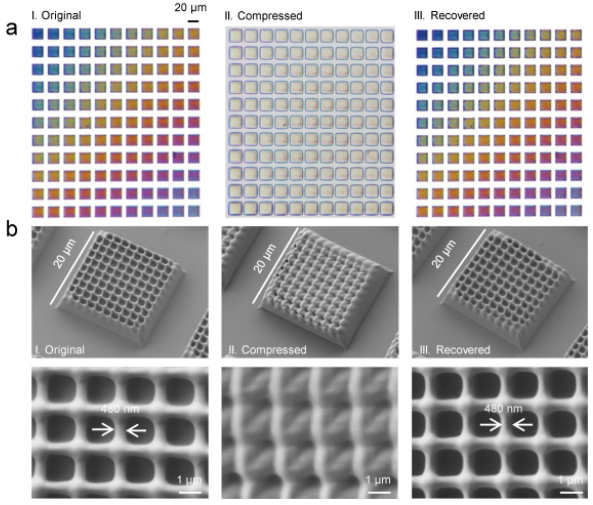 (a) Different colours as printed, compressed and recovered respectively, observed by the objective lens. (b) Tilted (30° tilt angle) and top view of SEM images before and after programming and after recovery.

4D printing enables 3D printed structures to change its configurations over time and is used in a wide variety of fields such as soft robotics, flexible electronics, and medical devices.

Different materials such as hydrogels, liquid crystal elastomers and magnetic nanoparticles embedded resists along with corresponding printing methods like Direct Ink Writing (DIW), Polyjet, Digital Light Processing (DLP) lithography and Stereolithography (SLA) have been developed for 4D printing. However, the material and patterning challenges inherent to these methods limit the resolution of 4D printing to ~10 μm at best.

To improve the resolution of 4D printing, the research team developed a shape memory polymer (SMP) photoresist suitable for two-photon polymerization lithography (TPL). Integrating this newly developed resist with TPL, they investigated submicron 4D printing of SMPs at which scale the printed structures can interact strongly with visible light. By programming with pressure and heat, the submicron structures can switch between colourless and colourful states (see image).

"It's remarkable that these 3D printed nanostructures are able to recover their shapes and structural colour after they've been mechanically flattened into a colourless, transparent state. This new resist that we've concocted allows for really fine structures to be printed while still retaining their properties as a shape memory polymer," said Associate Professor Joel K. W. Yang, principal investigator of the team from SUTD.

"By characterizing the photoresist, we printed the SMPs with ~300nm half pitch. The resolution is an order of magnitude higher than traditional high-resolution printing methods such as DLP and SLA. The dimensions of the structures can be conveniently controlled by varying the printing parameters such as laser power, write speed and nominal height," added Wang Zhang, first author and PhD student from SUTD.

Read the original article on American Association for the Advancement of Science (AAAS).