Rice University chemists have found a way to get the maximum amount of quality 2D hBN nanosheets from its natural bulk form by processing it with surfactant (aka soap) and water. The surfactant surrounds and stabilizes the microscopic flakes, preserving their properties.

Experiments by the lab of Rice chemist Angel Martí identified the “sweet spot” for making stable dispersions of hBN, which can be processed into very thin antibacterial films that handle temperatures up to 900 degrees Celsius (1,652 degrees Fahrenheit). 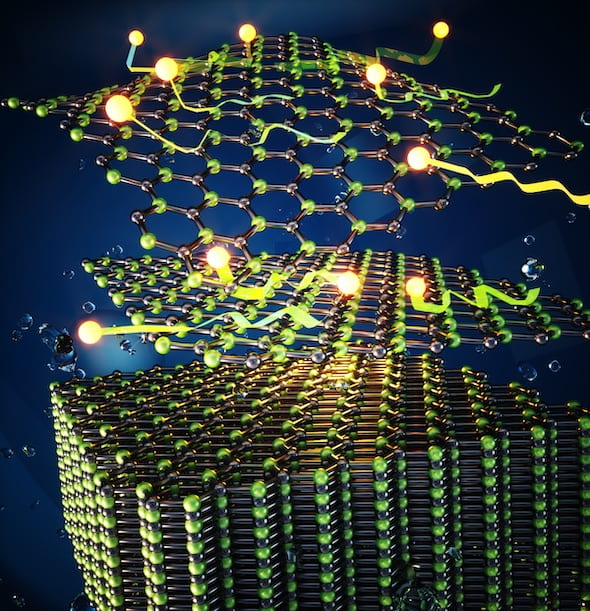 The image displays the exfoliation of hexagonal boron nitride into atomically thin nanosheets aided by surfactants, a process refined by chemists at Rice University.

“Boron nitride materials are interesting, particularly because they are extremely resistant to heat,” Martí said. “They are as light as graphene and carbon nanotubes, but you can put hBN in a flame and nothing happens to it.”

He said bulk hBN is cheap and easy to obtain, but processing it into microscopic building blocks has been a challenge. “The first step is to be able to exfoliate and disperse them, but research on how to do that has been scattered,” Martí said. “When we decided to set a benchmark, we found the processes that have been extremely useful for graphene and nanotubes don’t work as well for boron nitride.”

Sonicating bulk hBN in water successfully exfoliated the material and made it soluble. “That surprised us, because nanotubes or graphene just float on top,” Martí said. “The hBN dispersed throughout, though they weren’t particularly stable.

“It turned out the borders of boron nitride crystals are made of amine and nitric oxide groups and boric acid, and all of these groups are polar (with positive or negative charge),” he said. “So when you exfoliate them, the edges are full of these functional groups that really like water. That never happens with graphene.”

Experiments with nine surfactants helped them find just the right type and amount to keep 2D hBN from clumping without cutting individual flakes too much during sonication. The researchers used 1% by weight of each surfactant in water, added 20 milligrams of bulk hBN, then stirred and sonicated the mix.

DTAB — short for dodecyltrimethylammonium bromide — under high centrifugation proved best at balancing the yield and quality of 2D hBN.

The researchers also produced a transparent film from hBN nanosheets dispersed in SDS and water to demonstrate how they can be processed into useful products.

“We describe the steps you need to do to produce high-quality hBN flakes,” Martí said. “All of the steps are important, and we were able to bring to light the consequences of each one.”