The 5x5cm device was developed by a Japanese research group. The thickness of the perovskite films was increased to reduce defects and pinholes and this was achieved by adding ammonium chloride to the lead iodine solution used in the formation of the films. The device was able to work for 1,600 hours at more than 80% of this efficiency.

A research group from the Okinawa Institute of Technology (OIST) in Japan has developed a mini perovskite solar module based on large‐area uniform and dense perovskite films with a thickness of more than one‐micrometer.

The scientists fabricated two modules, sized 5x5cm2 and 10x10cm2, with efficiencies of 14.55% and 10.25%, respectively, which are claimed to rely on perovskite layers with high crystallinity, large grain sizes, and small surface roughness.

According to the scientists, the first device was able to work for 1,600 hours at more than 80% of this efficiency while the larger module was able to maintain unspecified high levels of efficiency for over 1,100 hours. 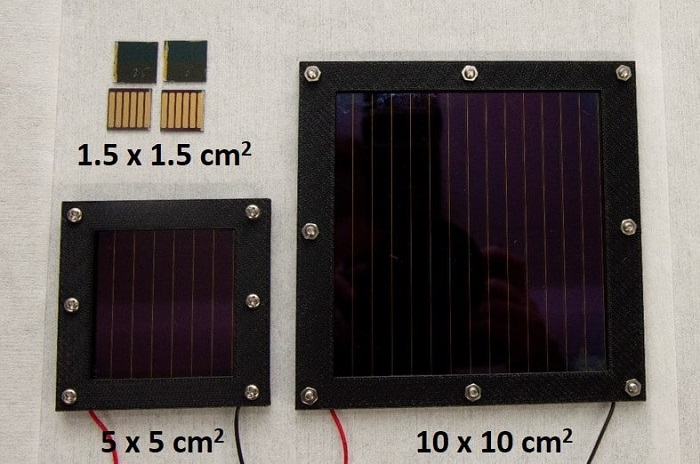 The two mini solar modules developed by the Japanese researchers.

“Scaling up is challenging because as the modules increase in size, it’s harder to produce a uniform layer of perovskite and these defects become more pronounced,” said researcher Guoqing Tong. “We wanted to find a way of fabricating large modules that addressed these problems.”

In larger perovskite modules, perovskite films are often developed with more defects and pinholes and this issue can be solved only by increasing the film thickness. This was achieved by dissolving a high concentration of lead iodine – which is one of the precursor materials generally used in perovskite cells to improve their efficiency and stability – in the formation of the perovskite film.

Ammonium chloride (NH4Cl), which is a white crystalline salt that is highly soluble in water, was added to the solution in order to increase the solubility of lead iodine. “This also allowed lead iodine to be more evenly dissolved in the organic solvent, resulting in a more uniform perovskite film with much larger grains and fewer defects,” the Japanese academics explained. “Ammonia was later removed from the perovskite solution, lowering the level of impurities within the perovskite film.”

Ammonium chloride was applied through a two‐step coating process that is said to effectively retard the crystallization rate of perovskite, leading to uniform and compact, full‐coverage perovskite layers across large areas. The academics are now planning to build a 15x15cm2 module and to test vapor-based methods in the manufacturing process.

The two mini panels are described in the paper Scalable Fabrication of >90 cm2 Perovskite Solar Modules with >1000 h Operational Stability Based on the Intermediate Phase Strategy, published in Advanced Energy Materials.

In previous research conducted by OIST, scanning tunneling microscopy was used to observe the nature of structural defects in a perovskite solar cell material. Many different approaches to this problem have been suggested, including ‘healing’ defects through carefully managed exposure to heat and light, using a potassium solution to limit the ion movement caused by such defects, and inserting extra layers into the cell.