Food and beverage ingredients induce the formation of silver nanoparticles in products stored within nanotechnology-enabled packaging.

Antimicrobial packaging is being developed to extend the shelf life and safety of foods and beverages. However, there is concern about the transfer of potentially harmful materials, such as silver nanoparticles, from these types of containers to consumables.

Now, researchers reporting in ACS Applied Materials & Interfaces illustrate that silver embedded in an antimicrobial plastic can leave the material and form nanoparticles in foods and beverages, particularly in sweet and sugary ones.

Some polymers containing nanoparticles or nanocomposites can slow the growth of microorganisms responsible for food and beverage spoilage and foodborne illness. Although these polymers are not currently approved for use in packaging in the U.S., researchers are investigating various types of nanoparticle-embedded polymers that could be incorporated into containers in the future.

Prior studies have shown that some of these polymers can leach nanoparticles, dissolved compounds and ions into water-based food simulants, but so far, little is known about how such packaging might interact with real foods and beverages. 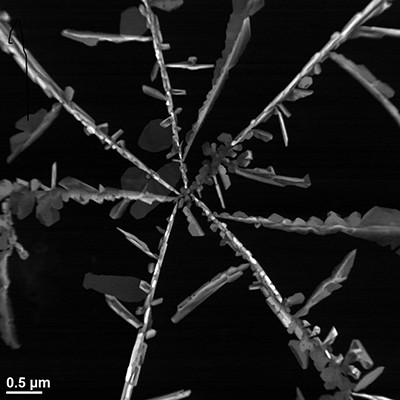 Large aggregations of silver nanoparticles form when dissolved silver is added to a sugary soft drink.

Some sugar compounds, which are typical food ingredients, can effectively convert silver ions into potentially harmful nanoparticles, and could then be ingested by humans. So, Timothy Duncan and colleagues wanted to see how the complex ingredients in sugary foods and beverages influenced the formation of these nanoparticles, both when directly exposed to dissolved silver and when they are stored inside silver-laced packaging.

To test if dissolved silver aggregates in complex edible mixtures, the researchers spiked silver into liquid foods and beverages, including naturally and artificially sweetened solutions, soda, milk, juices, yogurt and a starch-based slurry.

The mixtures were incubated at 104 F for 10 or more days, simulating long-term storage in a packaging material. Nanostructures were detected at two silver concentrations, one at the scale expected from polymer-contact leaching, and the other at an unrealistically high concentration, allowing the team to monitor nanoparticle formation by eye.

Sugary liquids with starches, citrates and fats had the most nanoparticles, while acidic liquids initially formed silver aggregates that later dissolved. In another experiment, the researchers stored water and two sugary liquids in small packets of silver-laced polyethylene polymer at 104 F for 15 days.

There was an initial release of dissolved silver from the polymer surface, but only the sugary solutions sustained further leaching and the creation of nanoparticles. The researchers concluded that silver nanoparticle dietary exposure is possible from sweetened foods and beverages packaged in antimicrobial materials under the conditions typical of long-term storage.

FODIAC, Foods for Diabetes and Cognition

New Ageing Test Could Be Gold Standard for Whisky Producers

Gold Can Speed Up Detection of White Spot in Shrimp