A new method for constructing special solar cells could significantly increase their efficiency. Not only are the cells made up of thin layers, they also consist of specifically arranged nanoblocks.

This has been shown in a new study by an international research team led by the Martin Luther University Halle-Wittenberg (MLU), which was published in the scientific journal "Nano Letters".

Commercially available solar cells are mostly made of silicon. "Based on the properties of silicon it’s not feasible to say that their efficiency can be increased indefinitely," says Dr Akash Bhatnagar, a physicist from the Centre for Innovation Competence (ZIK) "SiLi-nano" at MLU. His research team is therefore studying the so-called anomalous photovoltaic effect which occurs in certain materials.

The anomalous photovoltaic effect does not require a p-n junction which otherwise enables the flow of current in silicon solar cells. The direction of the current is determined at the atomic level by the asymmetric crystal structure of the corresponding materials. These materials are usually oxides, which have some crucial advantages: they are easier to manufacture and significantly more durable.

However, they often do not absorb much sunlight and have a very high electrical resistance. "In order to utilise these materials and their effect, creative cell architectures are needed that reinforce the advantages and compensate for the disadvantages," explains Lutz Mühlenbein, lead author of the study. 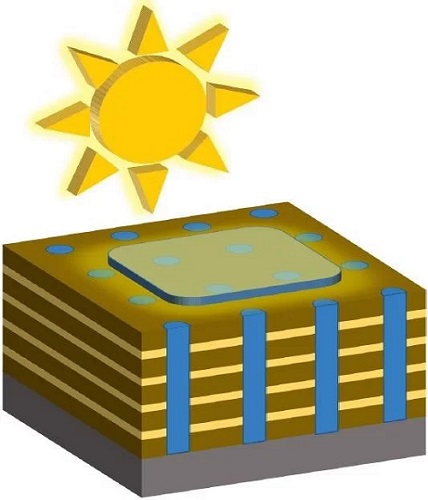 This schematic representation shows the new structure: nickel oxide stripes run perpendicular to the actual material, serving as a passing lane for the electrons.

In their new study, the physicists introduced a novel cell architecture, a so-called nanocomposite. They were supported by teams from the Bergakademie Freiberg, the Leibniz Institute of Surface Modification in Leipzig, and Banaras Hindu University in India.

In their experiment, the researchers stacked single layers of a typical material only a few nanometres in thickness on top of one another and offset them with nickel oxide strips running perpendicularly. "The strips act as a fast lane for the electrons that are generated when sunlight is converted into electricity and which are meant to reach the electrode in the solar cell," Bhatnagar explains. This is precisely the transport that would otherwise be impeded by the electrons having to traverse each individual horizontal layer.

The new architecture actually increased the cell’s electrical output by a factor of five. Another advantage of the new method is that it is very easy to implement. "The material forms this desired structure on its own. No extreme external conditions are needed to force it into this state," says Mühlenbein.

The idea, for which the researchers have now provided an initial feasibility study, could also be applied to materials other than nickel oxide. Follow-up studies now need to examine if and how such solar cells can be produced on an industrial scale.