Today’s digital world generates vast amounts of data every second. Hence, there is a need for memory chips that can store more data in less space, as well as the ability to read and write that data faster while using less energy. Researchers have developed an ultra-thin material with unique properties that could eventually achieve some of these goals.

Researchers from the National University of Singapore (NUS), working with collaborators from the University of Oxford, Diamond Light Source (the United Kingdom’s national synchrotron science facility) and University of Wisconsin Madison, have now developed an ultra-thin material with unique properties that could eventually achieve some of these goals. Their results were first published online in the journal Nature on 4 February 2021.

In existing ferromagnet memory devices like hard drives, information is stored into specific patterns of atoms (called bits), within which all the little magnetic poles are oriented in the same direction. This arrangement makes them slow and susceptible to damage by stray magnetic fields. In contrast, a special class of materials called anti-ferromagnets, made up with magnetic poles on adjacent atoms aligned oppositely, are emerging to be important for future memory technology.

In particular, there is a lot of interest in creating special magnetic nano-patterns in anti-ferromagnets that are shaped as whirls or vortices. In essence, each pattern consists of many little magnetic poles winding around a central core region in a clockwise or anti-clockwise manner, very much like air circulating inside a tornado or whirlwind. When realised experimentally, combinations of these anti-ferromagnetic whirls would be quite useful, as they are very stable structures and can potentially be moved along magnetic ‘race tracks’ at whirlwind speeds of a few kilometres per second!

They could act as new types of information bits that not only store memory but also participate in computational operations. Hence, they would enable a new generation of chips that are significantly faster yet more energy-efficient than today’s devices. 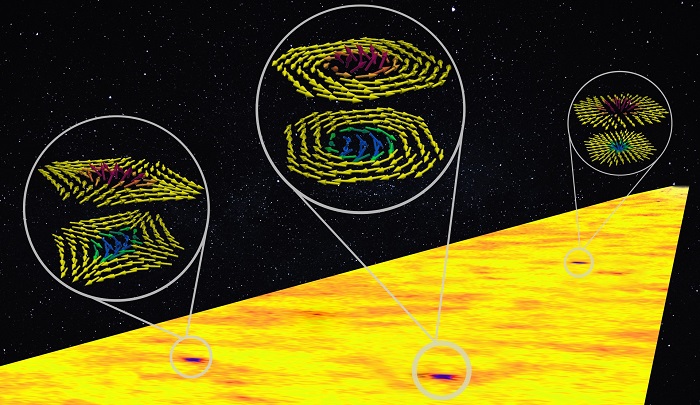 A family of anti-ferromagnetic whirls in iron-oxide that are generated after performing a magnetic transition analogous to the Big Bang cooling.

To date, constructing and manipulating patterns in anti-ferromagnetic materials has been very challenging, as they appear almost non-magnetic from afar. “Standard approaches for control, such as using external fields, fail to work on these materials. Therefore, to realise these elusive anti-ferromagnetic whirls, we came up with a novel strategy that combined high-quality film synthesis from materials engineering, phase transitions from physics and topology from mathematics,” explained Dr Hariom Jani, who is the lead author of the paper and a Research Fellow from the NUS Department of Physics.

To grow these materials, the researchers fired a laser at an extremely common and cheap material – iron-oxide, which is the main component of rust. By using ultra-short pulses of laser, they created a hot vapour of atomic particles that formed a thin film of iron-oxide on a surface.

Professor Thirumalai Venky Venkatesan, who led the NUS group and invented the pulsed laser deposition process for making the thin film, highlighted the versatility of the team’s approach. “The deposition process allows precise atom-level control during the growth, which is important for making high-quality materials. Our work points to a large class of anti-ferromagnetic material systems, containing phase transitions, in which one can study the formation and control of these whirls for eventual technological applications,” he said.

Explaining the underlying mechanism, Professor Paolo Radaelli, leader of the Oxford group, shared, “We drew inspiration from a celebrated idea in cosmological physics, from nearly 50 years ago, which proposed that a phase transition in the early universe, during the expansion after the Big Bang, may have resulted in the formation of cosmic whirls. Accordingly, we investigated an analogous magnetic process occurring in high-quality iron-oxide, which allowed us to create at will a large family of anti-ferromagnetic whirls.”

The team’s next step is to construct innovative circuits that can electrically control the whirls.