What is common between a technology for storing energy in a solar cell and that for water purification? They both rely on the use of porous materials, or more specifically, "nanoporous" materials that can trap gas molecules within narrow spaces on their surface, called "pores", which are only nanometers (one-billionth of a meter) in size! In chemistry parlance, the phenomenon is known as "adsorption" and has played an important role in the synthesis of porous materials of different compositions, pore sizes, and even pore geometries.

Traditionally, activated carbon (AC, or a porous form of carbon) has been a popular adsorbent for practical applications owing to its higher capacity of adsorption than that of other porous materials. Lately, however, porous boron nitride (p-BN) has emerged as a promising alternative because of its impressive performance, as highlighted by a recent study claiming that p-BN can adsorb a relatively large amount of carbon dioxide at room temperature. 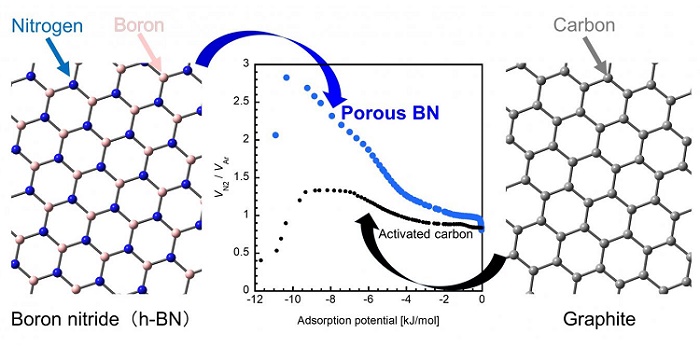 Now, a group of scientists from Okayama University and Nagasaki University, Japan, has put this claim to the test in their latest study, where they examined the adsorbing characteristics of p-BN in detail. "A BN unit and two carbon atoms (i.e., CC) both have the same number of electrons and similar structures, but their interaction with gas molecules are different due to the atomically heterogeneous nature of BN.

Despite this, there has been very little research on BN materials. In our study, we wanted to see if BN has specific adsorption properties that cannot be observed in carbon materials," explains Dr. Takahiro Ohkubo from Okayama University, who led this study published in the journal RSC Advances.

To begin with, the scientists synthesized p-BN samples at high temperature conditions under presence of nitrogen and investigated their structure using X-ray diffraction, infrared (IR) spectra analysis, and high-resolution electron microscopy. The samples only differed from one another with respect to the temperatures at which they were synthesized.

While X-ray diffraction data and IR revealed an "amorphous" phase (lacking well-defined structure) BN comprising "hexagonal phase" BN (h-BN) microcrystals for all samples, the one treated at 1673 K (1400°C), called p-BN-1673, showed the most ordered structure. After examining it under the electron microscope, the scientists found that this sample was composed of stacked layers of curved sheets with nanometer-size pores formed in between.

The scientists next looked at thermogravimetric curves of the samples to estimate their stability against oxidation and discovered that it was directly linked to the synthesis temperature, with higher temperatures entailing higher stability.

Moreover, some additional species of carbon and oxygen were introduced into the h-BN crystal framework especially in p-BN-1473, giving rise to chemically active sites for nitrogen adsorption. While these species ordinarily reduce oxidation stability, the crystallinity of h-BN helped preserve it up to 973 K under normal conditions--a property not present in carbon-based adsorbents!

Finally, upon comparing the gas adsorption ability of p-BN and AC with nitrogen and argon as adsorbates, scientists observed that p-BN pores adsorbed nitrogen more strongly than argon and in relatively much larger amount (~ 150%-200%) than did AC. They attributed this observation to an additional physical interaction between nitrogen and p-BN pores that was absent for argon, and the creation of adsorption sites in p-BN by the impregnated carbon and oxygen species.

With these results, the Dr. Ohkubo and team are confident about the emergence of p-BN as a next-generation adsorbent material. "Given its superior oxidation stability and nature of adsorption, we are looking forward to the applications of porous BN as a novel adsorbent and catalyst support material, especially in cases where the use of carbon adsorbents is not feasible," comments Dr. Ohkubo.