Oil and water may not mix, but adding the right nanoparticles to the recipe can convert these two immiscible fluids into an exotic gel with uses ranging from batteries to water filters to tint-changing smart windows. A new approach to creating this unusual class of soft materials could carry them out of the laboratory and into the marketplace.

Scientists at the National Institute of Standards and Technology (NIST) and the University of Delaware have found what appears to be a better way to create these gels, which have been an area of intense research focus for more than a decade. Part of their potentially broad utility is the complex set of interconnected microscopic channels that form within them, creating a spongelike structure.

These channels not only offer passageways for other materials to travel through, making them useful for filtration, but also give the gel a high amount of internal surface area, a characteristic valuable for speeding up chemical reactions or as scaffolding on which living tissue can grow.

While these and other advantages make it sound like gel innovators have struck oil, their creations have not yet mixed well with the marketplace. The gels are commonly formed of two liquid solvents mingled together.

As with oil and water, these solvents do not mix well, but to prevent them from completely separating, researchers add custom-designed nanoparticles that can stay at the interface between them. Carefully cooking these ingredients allows a cohesive gel to form.

However, the process is demanding because custom-designing nanoparticles for each application has been difficult, and forming the gels has required carefully controlled rapid temperature change. These constraints have made it hard to create this type of gel in any more than small quantities suitable for lab experiments rather than on an industrial scale. 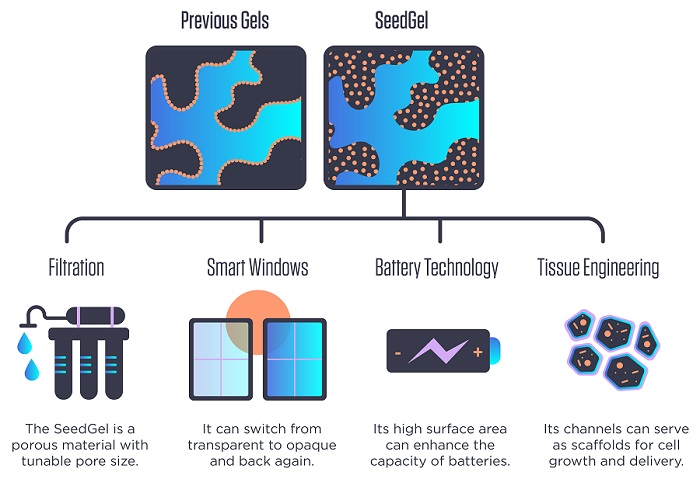 Unlike other gel-creation approaches, where nanoparticles remain at the interface between the gel's two constituent solvents (top left), the new approach concentrates nanoparticles in the interior of one of the solvents (top right), giving the resulting "SeedGel" unusual mechanical strength. The method could lead to gels that could be manufactured at industrial scales for a wide variety of potential applications.

As described in a new Nature Communications paper, the NIST/Delaware team has found ways to sidestep many of these problems. Its novel approach forms what the researchers refer to as a “SeedGel,” an abbreviation for “solvent segregation driven gel.” Instead of designing nanoparticles to remain at the interface between the two solvents, their chosen particles concentrate within one of them.

While these particles tend to repel one another, the particles’ affinity toward one of the solvents is stronger and keeps them together in the channel. Using neutron scattering tools at the NIST Center for Neutron Research (NCNR), the team unambiguously proved that it had succeeded at concentrating the nanoparticles where it wanted.

The resulting gel could be far easier to create, as its two solvents are essentially oil and water, and its nanoparticles are silicon dioxide — essentially tiny spheres of common quartz. It also could have a variety of industrial uses.

“Our SeedGel has great mechanical strength, it’s much easier to make, and the process is scalable to what manufacturers would need,” said Yun Liu, who is both an NCNR scientist and an affiliated full professor at the University of Delaware. “Plus it’s thermo-reversible.”

This reversibility refers to an optical property that the finished SeedGel possesses: It can switch from transparent to opaque and back again, just by changing its temperature. This property could be harnessed in smart windows that sandwich a thin layer of the gel between two panes of glass.

“This optical property could make the SeedGel useful in other light-sensitive applications as well,” said Yuyin Xi, a researcher from the University of Delaware also working at the NCNR. “They could be useful in sensors.”

Because the team’s gel-creation approach could be used with other solvent-and-nanoparticle combinations, it could become useful in filters for water purification and possibly other filtration processes depending on what type of nanoparticles are used.

Liu also said that the creation approach allows for the size of the channels within the gel to be tuned by changing the rate at which the temperature changes during the formation process, offering application designers another degree of freedom to explore.

“Ours is a generic approach working for many different nanoparticles and solvents,” he said. “It greatly extends the applications of these sorts of gels.”