Photocatalysis using particles in water is a promising technology for generating fuels from sunlight. One major obstacle to producing these solar fuels cheaply and abundantly, though, is that it requires semiconductors that are efficient but prone to corrosion.

In a breakthrough that overcomes this challenge, the lab of Shu Hu, assistant professor of Chemical & Environmental Engineering, has found a solution with a first-of-its-kind coating. The results are published in the Proceedings of the National Academy of Sciences.

Water-splitting systems – which break water down to hydrogen and oxygen - need semiconductor materials with narrow bandgaps (a property allowing for absorbing more sunlight), which efficiently converts solar energy to chemical energy. While these materials can easily capture sunlight, they all corrode under illumination via self-reduction or self-oxidation. It’s a challenge that researchers have spent more than a half-century trying to solve.

Strategies to protect these materials tend to limit their abilities to separate the charges of negative electrons and positive holes, a process that is essential to photocatalysis but harder to achieve than it is for other systems, such as solar cells. Typically, layers designed to guard these systems protect only one of the system’s two electrodes, namely the cathode or anode, limiting it to allow for the transport of either electron or hole – but not both. 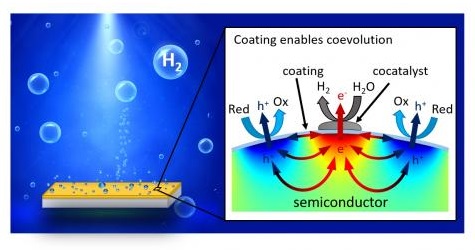 “But to make this new type of photocatalysts for the coevolution of two reactions, we knew that we needed to make the two charges generated within the light-absorbing material (known as the photoabsorber) transport through the coating to reach the reductive and oxidative reaction sites – in which electrons are either added or removed - both located on the surface,” Hu said.

Tianshuo Zhao, lead author of the study, said creating a coating that allows for both reactions would be a big step. Doing so successfully would “boost the solar-to-hydrogen efficiency to an order of magnitude higher.”

“We've developed a very effective protection strategy for these narrow bandgap semiconductors, stabilizing them during photoreactions, which requires more than the traditional protective design,” said Dr. Zhao, a postdoctoral associate in Hu’s lab.

The researchers created a 3-nanometer-thick coating. Made from titanium oxide in Hu’s lab, the coating conformally encapsulates the photoabsorber. Loaded onto the coating are metal nanoparticles that serve as co-catalysts. The structure allows the photocatalyst to perform different reactions at the cocatalyst site and bare coating surface concurrently. The system is designed to scale up readily, and it has achieved a record-high energy-conversion efficiency of 1.7% with narrow-bandgap semiconductors, while remaining stable for more than 150 hours, a much longer period compared to other systems of similar materials.

“The combination of coatings and cocatalysts makes it possible for electrons and holes to separately transport through the coating by design with minimum recombination," Hu said. "That makes this kind of particle-based solar fuel generators work.”