Angioplasty involves inflating a balloon at the tip of a catheter to compress fatty deposits (plaques) against the artery wall, thereby restoring blood flow to the narrowed or blocked vessels. The image-guided procedure is often combined with the placement of either uncoated stents — tiny expandable mesh devices– or stents coated with slowly-released antiproliferative drugs. The drug-eluting stents help avert the growth of scar tissue (smooth muscle cell proliferation) in the artery so that the vessel does not eventually close again, known as restenosis.

However, current antiproliferative drugs indiscriminately inhibit the growth of all nearby cells, including the layer of endothelial cells lining the blood vessels. These endothelial cells prevent blood clots (thrombosis) within the stent and the formation of more plaques (neoatherosclerosis), which can trigger a heart attack or sudden cardiac death.

The nanotherapy comprised of a nontoxic peptide known as p5RHH and a synthetic messenger RNA (mRNA) that carries the genetic instructions, or code, needed by cells to make proteins. By simply mixing up the p5RHH with the mRNA, they spontaneously self assemble into compacted nanoparticles that specifically target the injured regions of the arteries in mouse models mimicking angioplasty. The nanoparticles contain an microRNA switch added to the mRNA.

“One of the main challenges of cardiovascular disease remains the delivery of targeted therapies specifically to the plaque regions and the cells that form plaques, including the smooth muscle cells and inflammatory cells — without affecting the endothelial cells or the healthy regionssaid the study’s principal investigator Hana Totary-Jain, PhD, an associate professor of molecular pharmacology physiology at USF Health Morsani College of Medicine.

To do this, the researchers used mRNA that encodes for p27 protein, which blocks cell growth, and added to the mRNA an endothelial cell-specific microRNA to generate a microRNA switch. The design of this microRNA switch allowed the researchers to turn on the mRNA in smooth muscle cells to inhibit their growth and the formation of restenosis. It also enabled them to turn off the mRNA in endothelial cells so these cells could grow uninhibited and quickly heal the damaged blood vessel.

“If we can come up with an antiproliferative therapy that specifically targets the cardiovascular smooth muscles cells and the infiltrating inflammatory cells but spares the endothelial cells – which we’ve done with the design of our microRNA switches – then we should be able to achieve the therapeutic effects of drug-eluting stents without the downside of thrombosis and neoatherosclerosis,” said the paper’s lead author John Lockhart, PhD, who worked on the study as a doctoral student at USF Health Molecular Pharmacology and Physiology. Dr. Lockhart is continuing his postdoctoral training at Moffitt Cancer Center.

The latest study builds upon previous research by Dr. Totary-Jain, indicating that a microRNA-based therapy worked better than drug-eluting stents in a rat model of angioplasty. That work used an adenovirus vector to carry the cell-selective therapy to injured arteries. In this study the viral vector was replaced with a nanoparticle alternative – a change needed to avoid safety concerns and advance the therapy toward use in patients. 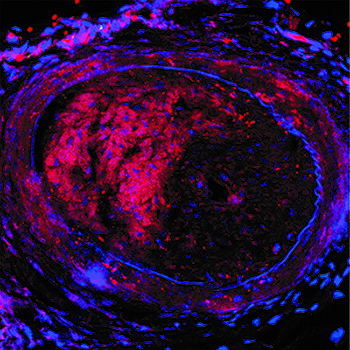 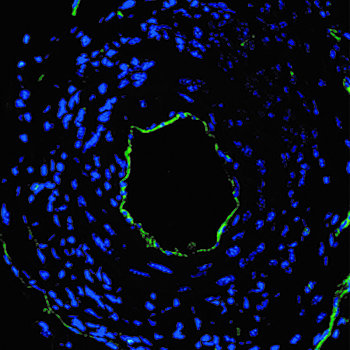 In addition, the nanoparticles efficiently delivered its mRNA cargo, without degradation, solely to regions of the artery where endothelial cells were damaged. The particles did not toxically accumulate either in the cells of healthy organs (the liver, spleen. lungs or kidneys), or in uninjured arteries adjacent to those requiring treatment. The researchers observed no adverse reactions or outcomes in mice treated with the nanoparticles.

Overall, the findings suggest that the miRNA-switch nanoparticles could be applied clinically to selectively prevent restenosis after PCI by specifically targeting areas of endothelial cell damage to allow quicker cell regrowth and repair of injured arteries.

The USF Health researchers next plan to investigate the potential of the microRNA-switch nanoparticles to directly treat atherosclerotic plaques, thereby eliminating the need for PCI.

“Cardiovascular disease is still the number one cause of death,” said Dr. Totary-Jain, a member of the USF Health Heart Institute. “This research offers promise for the development of novel biomolecular therapies to advance the fight against coronary artery disease and peripheral artery disease,”

One person dies of cardiovascular disease every 36 seconds in the U.S., according to the Centers for Disease Control and Prevention.

Read the original article on University of South Florida.