As of today, the novel coronavirus, severe acute respiratory syndrome coronavirus 2 (SARS-CoV-2), has infected more than 108 million individuals and claimed the lives of nearly 2.7 million globally. This past year management of the COVID-19 pandemic solely relied on non-pharmaceutical interventions such as school closures, physical distancing, shielding of those at heightened risk, and self-isolation of symptomatic cases.

Currently, prophylactic vaccines - developed at an unprecedented pace are being administered across the globe. However, many viral variants are emerging, threatening the success of the on-going efforts. Despite the adopted mitigation strategies, the COVID-19 pandemic requires multiple countermeasures.

Nanobodies are a potential therapeutic strategy for treating COVID-19. While many previous studies report nanobodies active against SARS-CoV-2 in vitro, none have been evaluated via animal models' intranasal administration. 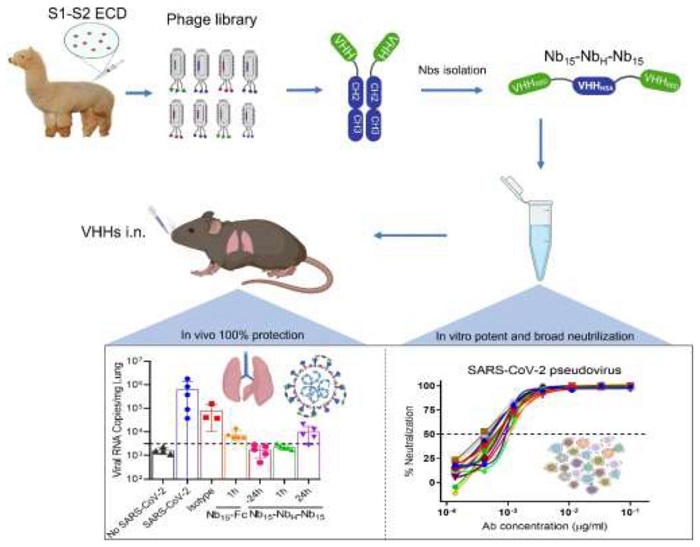 Their recent bioRxiv research paper demonstrates 100% protection in both the prevention and treatment of SARS-CoV-2 infected transgenic hACE2 mice (expressing the human angiotensin-converting enzyme 2) when their engineered nanobodies are administered intranasally.

They also report that this novel bispecific antibody exhibited potent inhibitory activity against the wild-type and variants of SARS-CoV-2, including the currently circulating variants, such as the predominant mutant viruses in the UK and South Africa with N501Y mutation.

In this study, an alpaca was immunized with the SARS-CoV-2 spike glycoprotein (S). The researchers isolated the Nbs specific for the RBD from a phage library displaying the Nbs.

When administered via i.n. (intranasal), i.p. (intraperitoneal), or i.v. (intravenous), the researchers observed that the three constructs metabolized rapidly. Notably, only upon intranasal administration, the Nb localized in the trachea and lungs. This suggests the intranasal administration be a favorable route for the antibodies to reach the nasopharynx and the lungs where SARS-CoV-2 replicates.

Because the Nb15-NbH-Nb15 sustained for more than 7 days, the researchers chose this construct to avoid any potential adverse drug events in the body. This construct also retained 100% activity after aerosolization, indicating the potential application as a nebulized drug.

Nb15-NbH-Nb15 exhibited sub-ng/ml (pM) potency against both the wild-type and the currently circulating mutant variants of SARS-CoV-2, specifically against the variants with the D614G and N501Y mutations that circulate predominantly in the UK and South Africa.

The Nb constructed demonstrated both prophylactic and therapeutic efficacy against SARS-CoV-2 challenge in vivo. The researchers observed superior protection efficacy, especially when the Nbs were given early on during the infection.

Because significant copies of SARS-CoV-2 are detected in the respiratory tract and a few viral copies in the blood, it is most effective to design direct delivery of therapeutic agents into the tract.

"We suggest that respiratory delivery of Nb15-NbH-Nb15 is a promising route for the prevention and treatment of SARS-CoV-2 infection, and thus warrants further clinical evaluation."

The study here shows that Nb15-NbH-Nb15, with a novel heterotrimeric bispecific configuration, exhibited potent and broad neutralization potency against SARS-CoV-2 in vitro and provided in vivo protection against SARS-CoV-2 infection in hACE2 transgenic mice via intranasal delivery.

Significantly this study demonstrates that the constructed nanobodies show potency against the SARS-CoV-2 variants - D614G and N501Y - which are conferred enhanced replication and transmissibility, emerging as the predominant global variants.

The ultrahigh and broad neutralizing activity of the constructed nanobodies tested in this study - that is both prophylactic and therapeutic - maybe one of the countermeasures we need today.