Concept for A New Storage Medium

Physicists from Switzerland, Germany and Ukraine have proposed an innovative new data storage medium. The technique is based on specific properties of antiferromagnetic materials that had previously resisted experimental examination.

Using nanoscale quantum sensors, an international research team has succeeded in exploring certain previously uncharted physical properties of an antiferromagnetic material. Based on their results, the researchers developed a concept for a new storage medium published in the journal Nature Physics. The project was coordinated by researchers from the Department of Physics and the Swiss Nanoscience Institute at the University of Basel.

Antiferromagnets hold great promise for exciting applications in data processing, as the orientation of their magnetic moment – in contrast to the ferromagnets used in conventional storage media – cannot be accidentally overwritten by magnetic fields. In recent years, this potential has given rise to the budding research field of antiferromagnetic spintronics, which is the focus of numerous research groups around the world. 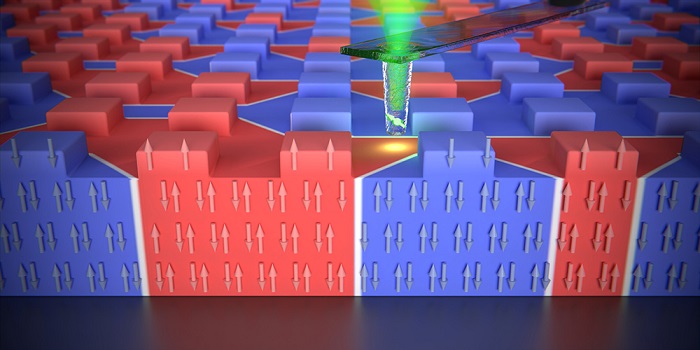 In an antiferromagnetic single crystal, regions with different orientations of the antiferromagnetic order have been created (blue and red regions), separated by a domain wall. Their course can be controlled by structuring the surface. This is the basis for a new storage medium concept.

In collaboration with the research groups under Dr. Denys Makarov (Helmholtz-Zentrum in Dresden, Germany) and Professor Denis D. Sheka (Taras Sevchenko National University of Kyiv, Ukraine), the team led by Professor Patrick Maletinsky in Basel examined a single crystal of chromium(III) oxide (Cr2O3). This single crystal is an almost perfectly ordered system, in which the atoms are arranged in a regular crystal lattice with very few defects. “We can alter the single crystal in such a way as to create two areas (domains) in which the antiferromagnetic order has different orientations,” explains Natascha Hedrich, lead author of the study.

These two domains are separated by a domain wall. To date, experimental examinations of domain walls of this sort in antiferromagnets have only succeeded in isolated cases and with limited detail. “Thanks to the high sensitivity and excellent resolution of our quantum sensors, we were able to experimentally demonstrate that the domain wall exhibits behavior similar to that of a soap bubble,” Maletinsky explains. Like a soap bubble, the domain wall is elastic and has a tendency to minimize its surface energy. Accordingly, its trajectory reflects the crystal’s antiferromagnetic material properties and can be predicted with a high degree of precision, as confirmed by simulations performed by the researchers in Dresden.

“Next, we plan to look at whether the domain walls can also be moved by means of electrical fields,” Maletinsky explains. “This would make antiferromagnets suitable as a storage medium that is faster than conventional ferromagnetic systems, while consuming substantially less energy.”