Researchers at the Centre for Integrated Multiscale Materials Systems CIMMS, which is currently being established at DESY and the Technical University of Hamburg, want to investigate nanomaterials that can be used for electrical energy harvesting.

In the research project "Energy harvesting via wetting/drying cycles with nanoporous electrodes EHAWEDRY", an international team wants to investigate whether phase transitions of water in nanopores can be used to generate electrical energy on a larger scale. If the interdisciplinary project, which is being funded with a total of almost three million euros over four years, is successful, it could revolutionize the generation of electrical energy. Researchers at the Centre for Integrated Multiscale Materials Systems (CIMMS), which is currently being established at DESY and the Technical University of Hamburg, want to investigate nanomaterials that can be used for this purpose at PETRA III.

Nature has developed porous biomaterials, especially in the plant kingdom, which can directly gain mechanical energy for movement from moisture changes in their environment, such as between day and night or between dry and rainy seasons. For example, some plant germs bury themselves autonomously in the soil only by using water condensation and evaporation energy, without requiring any external energy. As part of a European consortium, researchers in Hamburg now want to develop artificial porous materials and nanofluidic processes that utilise moisture fluctuations in such natural processes, but also in technical processes, in order to generate electrical energy that can be used directly by humans. 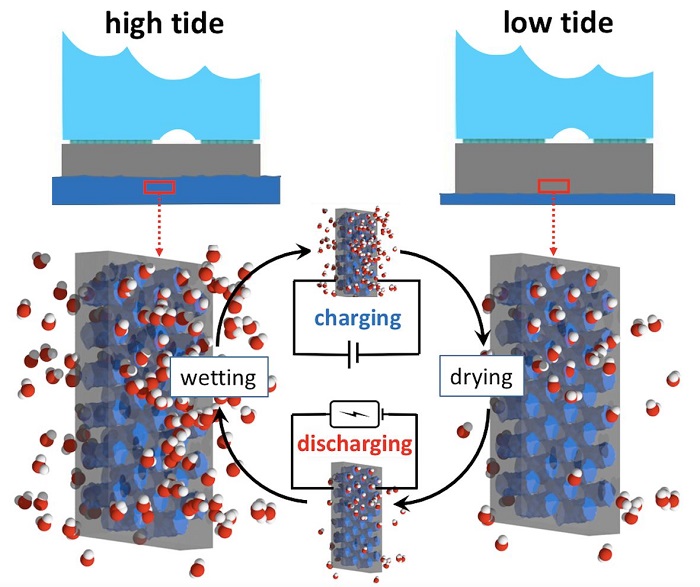 Nanoporous surfaces on buildings on or in the water, which are moistened and drained in the natural rhythm of the tides, can be used to generate electrical energy; for example at the Elbphilharmonie concert hall in the harbor of Hamburg.

The solution could be a radically new technology. For this, the international team is investigating cycles of wetting and drying of electrically conductive, nanoporous materials, such as made of silicon or carbon. "We are exploring how water and aqueous electrolytes, such as brine, are driven by capillary forces to penetrate and thus moisten the smallest pores, which in cross-section hold only 50 water molecules. This increases the contact area between the liquid and the electrically conductive pore wall. Conversely, the opposite effect occurs during drying. The contact area decreases. If the electrical charge layers on the nanopore walls that build up and break down in this way are skilfully guided, electrical energy can be generated directly from these cycles," explains Patrick Huber, Professor and head of the Physics and High-Resolution X-ray Analytics of Functional Materials research group at TU Hamburg and DESY.

Nanoporous materials can be compared to sponges, which consist of millions of tiny pores. One cubic centimetre of these can have an entire football field of inner surface. "This property means that the contact areas between liquid and solid and thus the electrical capacities per volume are very large. The energy conversion per wetting and drying cycle is therefore very efficient," Huber continues.

"Climate change faces us with the challenge of using as few fossil fuels and thus CO2 production as necessary for the production of electrical energy. At the same time, a large proportion of the primary energy is emitted into the environment as waste heat, for example, and additionally heats it up to the detriment of the climate. Within the framework of this project, we want to change this by developing and researching new materials in combination with clever process control of drying and humidification cycles on the nanoscale, for example using industrial waste heat," explains Andriy Yaroshchuk, Professor at Universitat Politècnica de Catalunya, Barcelona, initiator and coordinator of this international project.

This new technology can be used in many ways and on a large scale. On the one hand, the condensation of water is conceivable in a closed circuit from pore space to pore space. This would make it possible to use it in closed rooms or very hot areas, for example to use the waste heat from mainframe computers or the heat in desert regions for sustainable energy production. On the other hand, it would also be possible to realise a material surface that is permeable to the outside. In this way, the material interior could be supplied with liquid from morning dew by the natural day and night rhythm. If the outside temperature then rises, the water evaporates and electrical energy is generated. Surfaces that are moistened in the natural rhythm of the tides at high tide and dry again at low tide would also be ideal for this purpose.

There are many scientific challenges for the project: In addition to the production and functional design of the porous media, particular scientific challenges are to investigate the physico-chemical behaviour and the transport of water, water vapour and ions in the tiny pores in detail and thus make them predictable. In particular, the spontaneous formation of air bubbles in the pore space (cavitation) must be controlled as far as possible. To address these challenges, 3-D X-ray imaging methods, such as those available at DESY´s X-ray source PETRA III, are to be carried out in a time- and process-dependent manner in order to mechanistically understand and optimise the phase transitions and reorganisation of water and thus the energy conversion on the scale of individual nanopores, but also on the macroscopic scale of the electrically conductive porous medium.