Putting Graphene in a Spin

Graphene is incredibly strong, lightweight, conductive … the list of its superlative properties goes on. It is not, however, magnetic — a shortcoming that has stunted its usefulness in spintronics, an emerging field that scientists say could eventually rewrite the rules of electronics, leading to more powerful semiconductors, computers and other devices.

Now, an international research team led by the University at Buffalo is reporting an advancement that could help overcome this obstacle.

In a study published today in the journal Physical Review Letters, researchers describe how they paired a magnet with graphene, and induced what they describe as “artificial magnetic texture” in the nonmagnetic wonder material.

“Independent of each other, graphene and spintronics each possess incredible potential to fundamentally change many aspects of business and society. But if you can blend the two together, the synergistic effects are likely to be something this world hasn’t yet seen,” says lead author Nargess Arabchigavkani, who performed the research as a PhD candidate at UB and is now a postdoctoral research associate at SUNY Polytechnic Institute. 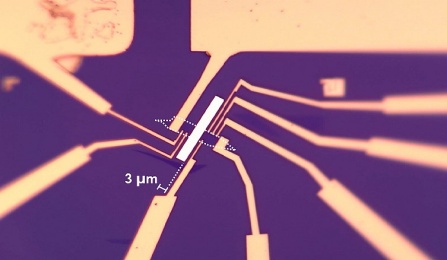 For their experiments, researchers placed a 20-nanometer-thick magnet in direct contact with a sheet of graphene, which is a single layer of carbon atoms arranged in a two-dimensional honeycomb lattice that is less than 1 nanometer thick.

“To give you a sense of the size difference, it’s a bit like putting a brick on a sheet of paper,” says the study’s senior author Jonathan Bird, PhD, professor and chair of electrical engineering at the UB School of Engineering and Applied Sciences.

Researchers then placed eight electrodes in different spots around the graphene and magnet to measure their conductivity.

The electrodes revealed a surprise — the magnet induced an artificial magnetic texture in the graphene that persisted even in areas of the graphene away from the magnet. Put simply, the intimate contact between the two objects caused the normally nonmagnetic carbon to behave differently, exhibiting magnetic properties similar to common magnetic materials like iron or cobalt.

Moreover, it was found that these properties could overwhelm completely the natural properties of the graphene, even when looking several microns away from the contact point of the graphene and the magnet. This distance (a micron is a millionth of a meter), while incredibly small, is relatively large microscopically speaking.

The findings raise important questions relating to the microscopic origins of the magnetic texture in the graphene.

Most importantly, Bird says, is the extent to which the induced magnetic behavior arises from the influence of spin polarization and/or spin-orbit coupling, which are phenomena known to be intimately connected to the magnetic properties of materials and to the emerging technology of spintronics.

Rather than utilizing the electrical charge carried by electrons (as in traditional electronics), spintronic devices seek to exploit the unique quantum property of electrons known as spin (which is analogous to the earth spinning on its own axis). Spin offers the potential to pack more data into smaller devices, thereby increasing the power of semiconductors, quantum computers, mass storage devices and other digital electronics.