One of the new nanotechnologies available to industry is nanolaminate metallic alloys, which can be applied to a variety of base materials. These metallic alloys, designed to improve asset life expectancy in highly corrosive surface and subsurface environments.

Let me start this month’s column with a confession: I am a huge fan of nanotechnology! The official definition of nanotechnology is “science, engineering and technology conducted at the nanoscale, which is about 1 to 100 nanometers”. A nanometer is one-billionth (10-9) of a meter, or 10Å—so, very small. A human hair has a diameter of 1,000,000 nanometers. I believe that nanotechnology can be a game-changer for the oil and gas industry. You might wonder how technology, so small, could benefit an industry whose equipment is usually so large.

In future columns, I will present several novel technologies that I’ve run across in my “technology wanderings.” I believe that these technologies have the potential for a disruptive economic impact on the production side of the oil and gas industry.

Meanwhile, let’s start with one of the most common issues we face—corrosion.

Nanolaminated coatings. One of the new nanotechnologies available to industry is nanolaminate metallic alloys, which can be applied to a variety of base materials. These metallic alloys, designed to improve asset life expectancy in highly corrosive surface and subsurface environments, are a product line called NanoGalv® and NanoPlex® nanolaminated coatings. These are offered by Modumetal, Inc. Theirs is a very elegant technology of electro-depositing (or “nanolaminating”) various alloys onto a substrate, using waveform modulation of the electric current.

Nanolaminated coatings refer to a class of materials that are comprised of nanometer-scale layers that vary in composition, phase, material microstructure, or a combination of thereof. Nanolaminated metallic coatings provide a thin, corrosion-resistant layer that protects the substrate material from the environment. Through an electrochemically controlled deposition process, precisely defined configurations of layered metal alloys are assembled onto a substrate material, such as carbon steel. 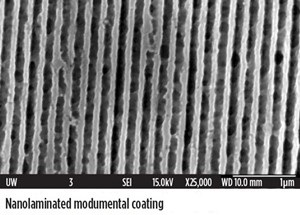 The deposition process can be controlled to produce nano-scaled layers with unique interfacial properties, resulting in enhanced corrosion resistance, elastic modulus, strength, hardness, adhesion, and fracture toughness……as a result of the atomic structure of the interfaces between the nano-layers. Figure 1 is a scanning-electron-microscope view of a cross-section of nanolaminations on a substrate.

So, how does this nanolamination phenomenon prevent corrosion? Figure 2 below demonstrates how nanolamination creates a more difficult path to the base material. The left side of the figure demonstrates the theoretical corrosion progression through a conventional homogeneous coating. Whether general or pitting in nature, the corrosion process progresses through the thickness of a homogenous coating system, leading to failure and reduced life expectancy.

The right side of the figure demonstrates how nanolaminations slow corrosion progression. Corrosion attacks the outermost layer first and then progresses to the layer below it. At that point, the corrosion is confronted by an interface that represents an additional barrier. Corrosion tends to be confined to the less noble layer. Each layer is protected cathodically, and corrosion proceeds laterally rather than through the nanolayered alloy. The key is to optimize corrosion resistance by controlling the galvanic interactions between layers. 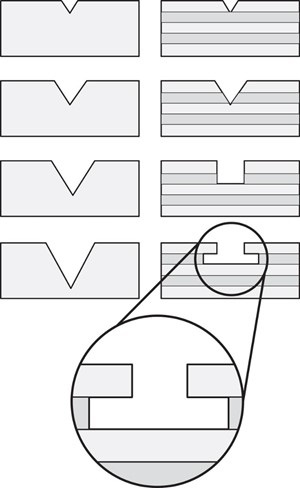 After years of research, third-party testing, and fields trials in harsh environments, Modumetal concluded that a zinc-nickel nanolaminated system provided optimal corrosion protection for surface applications. The corrosion-resistant properties of this technology were compared to several conventional coating systems and documented in NACE paper 9920, “Zinc-nickel nanolaminate—Advanced coating for bolt corrosion control,” and presented at the 2017 Corrosion Conference & Expo.

In 2020, Modumetal started applying its NanoGalv® coating system to fasteners (such as studs, nuts and bolts) for the oil and gas industry. The NanoGalv® coating used on studs, nuts and bolts is approximately 8 microns thick. To confirm that the coating would not interfere with the tightening of fasteners, Modumetal tested the effect of NanoGalv® on the nut torquing process and found that the K-factors were unaffected.

Field experience has shown that NanoGalv® coatings are not damaged by standard installation tools or practices, such as impact wrenches. So, when thinking about one of the biggest problems facing our facilities and equipment, think small.