DNA nanotechnology – the research field using DNA molecules as building material – has developed rapidly during recent years and enabled the construction of increasingly complex nanostructures. DNA nanostructures, such as DNA origami, serve as an excellent foundation for nanocarrier-based drug delivery applications, and examples of their use in medical treatments have already been demonstrated. Although the stability of such DNA nanostructures under physiological conditions can be improved, little is known about their digestion by endonucleases, which, found everywhere in our blood and tissues, are responsible for destroying foreign DNA in our bodies.

To tackle this emerging question, a team of researchers from Aalto University (Finland), the University of Jyväskylä (Finland), Ludwig-Maximilian-Universität München (Germany) and Universität Paderborn (Germany) have found a way to study the endonuclease-driven digestion of drug-loaded DNA nanostructures in real time. 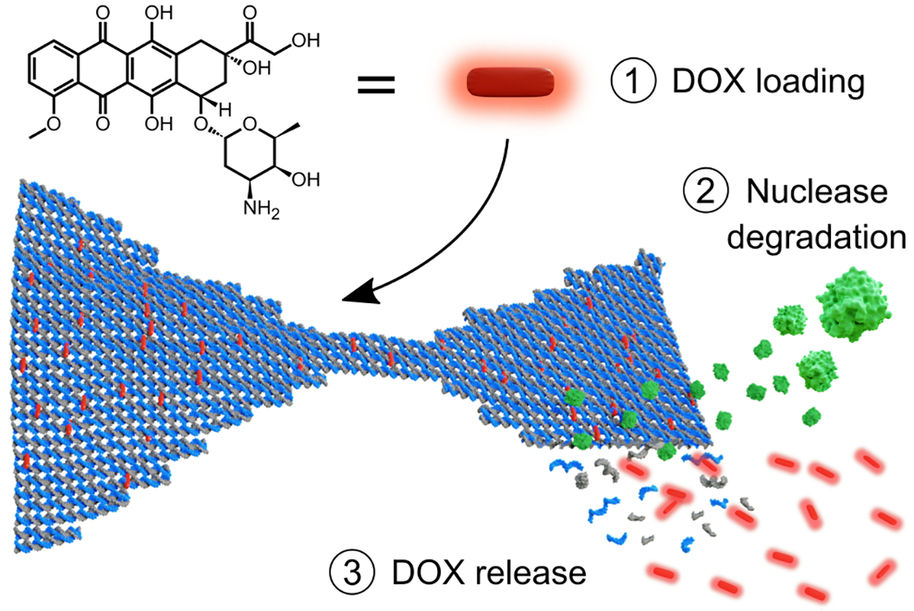 1) Anti-cancer Dox molecules (red) are loaded into DNA origami nanostructures (blue bow tie) through intercalation. 2) DNA origami is digested by endonuclease (green). 3) As the origami is broken down into short single-stranded fragments, the Dox is released into the surrounding environment.

The researchers’ previous experiments used high-speed atomic force microscopy to show that the design of DNA origami plays a role in how quickly they break apart in an endonuclease-rich environment. While they could follow the digestion process at a single-structure level, the approach was limited to two-dimensional DNA origami shapes deposited on a microscope substrate.

Now the group has monitored DNA degradation and the subsequent anti-cancer drug doxorubicin (Dox) release from the DNA structures. The drug bonds between DNA base pairs.

‘We observed both the digestion and drug release profiles as the drug is released upon DNA fragmentation by nucleases, and importantly, in the solution phase. With this method we can actually see the collective behaviour of all the nanostructures when they are floating freely in liquid,’ says Adjunct Professor Veikko Linko from Aalto University, who led the study.

‘It seems the digestion happens differently on substrates and in solution, and by combining these two types of information, we can better understand how the nanostructures are digested by nucleases in the bloodstream. Moreover, we showed that the drug release profiles were closely linked to the digestion profiles, and a wide range of drug doses could be achieved simply by changing the shape or geometry of the DNA nanostructure,’ explains doctoral student Heini Ijäs, the main author of the research.

As the team investigated the binding of Dox to the DNA structures in great detail, they discovered that the majority of previous studies have vastly overestimated the Dox loading capacity of DNA origami.

‘The anti-cancer effects of Dox-equipped DNA nanostructures have been reported in many publications, but it seems these effects may have been mainly caused by  free or aggregated Dox molecules, not by the drug-loaded DNA motifs. We believe this type of information is crucial for the development of safe and more effective drug delivery systems, and brings us one step closer to real-world DNA-based biomedical applications,’ says Ijäs.