Molecules Inside Carbon Nanotubes as Spin Switches for Electrical Current

IMDEA Nanociencia researchers report the first encapsulation of spin-crossover (SCO) molecules inside carbon nanotubes. SCO molecules present a radical spin change with temperature, relevant for magnetic switches and spintronics devices. This is a fundamental research result that helps to understand the behaviour of magnetic molecules confined in very small spaces.

A research work published in Nature Communications, involving researchers from the Madrid Institute for Advanced Studies in Nanoscience (IMDEA) and the University of Sevilla, has measured for the first time the electrical conductivity of a single carbon nanotube with spin-crosslinked molecules inside it.

As electronic devices continue to shrink to meet the demands of the market, scientists are working to develop the minute components that make them work. There is a persistent demand for fast and efficient processes, and spin-logic (Spintronics) devices could be the solution to shape the future of computing. Here, magnetic molecules could add a new twist to conventional electronics. In particular, spin-crossover (SCO) molecules conform a family of zero-dimensional (0D) functional units that display a radical spin switch triggered by an electro-structural change activatable by external stimulus such as light, pressure or temperature. The spin switch confers SCO molecules excellent capabilities and functionalities for implementation in nano-electronics. However, their insulating character prevent these molecules to be fully exploited so far. Several groups have embedded SCO molecules into matrices of conductive material but the results are not fully compatible with the requirements of nanoscale devices.

A ground-breaking system for effectively incorporating SCO molecules to conductive materials is to introduce them inside conductive carbon nanotubes. Carbon nanotubes are one-dimensional (1D) materials, strong, lightweight and, most importantly, highly electrically conducting miniature wires, typically 1-5 nanometres in diameter, but up to centimetres in length. For the first time, a group of researchers at IMDEA Nanociencia have encapsulated Fe-based SCO molecules inside carbon nanotubes. The single-walled carbon nanotubes act as conducting backbones that carry, protect and sense the SCO spin state of the molecules, and overcomes their insulating drawbacks.

The researchers, led by Prof. Emilio M. Pérez, Dr. José Sanchez Costa and Dr. Enrique Burzurí, studied the electron transport through individual carbon nanotubes embedded in nanoscale transistors by dielectrophoresis. They found a change in the nanotube’s electrical conductance that is modified by the spin state of the encapsulated SCO molecules. The transition between the two conducting states is triggered by a thermal switch that turns out to be not symmetric: the transition temperature point is not the same going down than up the thermometer. This fact opens a hysteresis not present in crystalline samples, and many interesting potential applications for the hybrid system arise: “These systems are like mini-memory elements at the nanoscale, as they present a hysteresis cycle with temperature variation. They could also serve as a filter of spin (a demand for spintronic devices) because the nanotube “feels” if the molecule has spin or not” Dr. Burzurí comments. 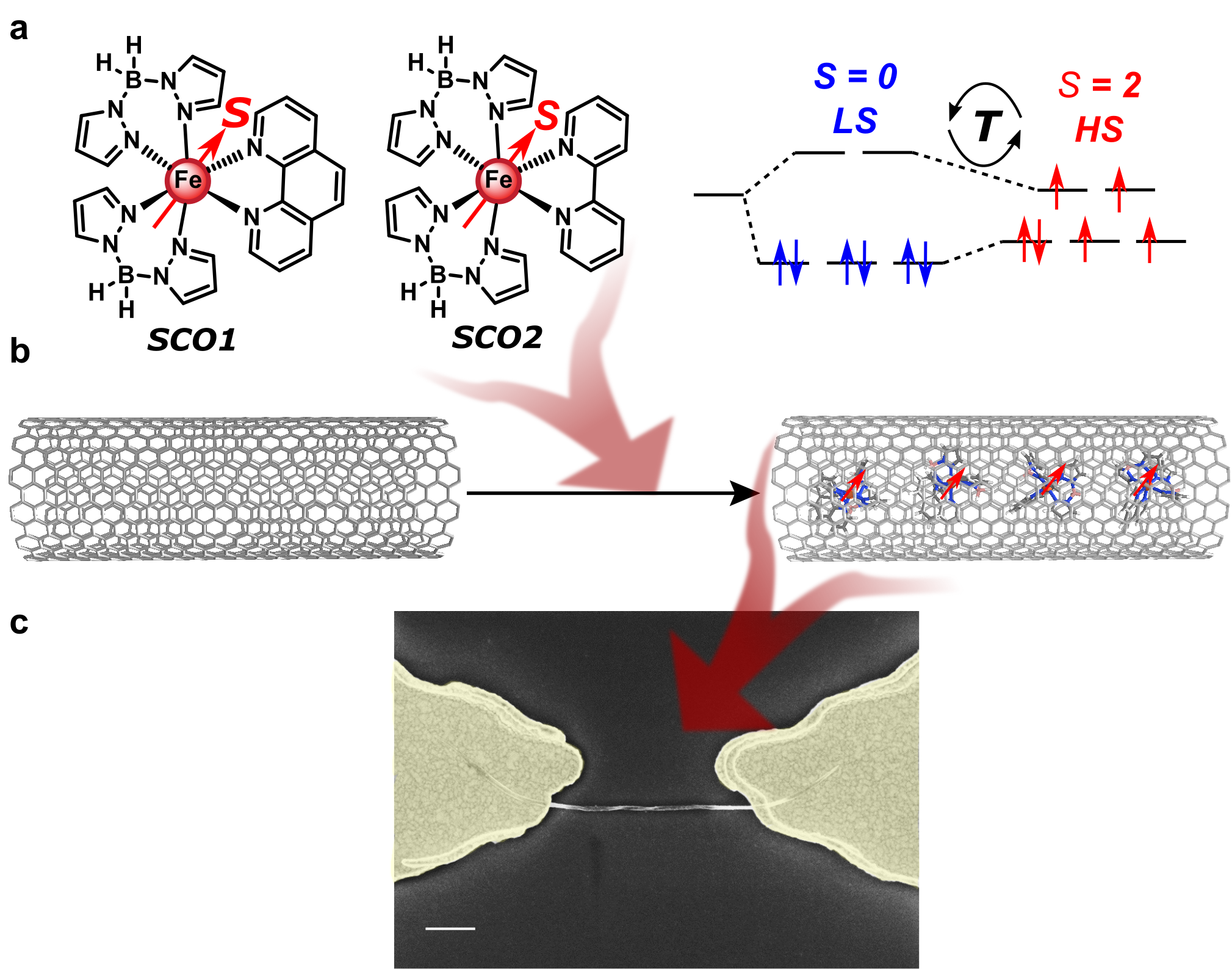 The experimental results are supported by theory calculations by researchers at Universidad de Sevilla. During the switching, the orbitals of the SCO molecules change and hence their hybridization with the carbon nanotube, that in turn modifies the electrical conductivity of the latter. The SCO molecules in their low spin state have a stronger interaction with the nanotubes; it is more difficult for them to change their spin state and this is translated to a “jump” in the nanotube conductivity at a certain temperature, depending on the initial spin state.

This first encapsulation of SCO molecules inside single-walled carbon nanotubes is a fundamental research result that helps to understand the behaviour of these molecules when confined in very small spaces, and provides a backbone for their readout and positioning into nanodevices. The authors hope that such mix-dimensional (0D-1D) hybrid can leverage the best properties of their constituent materials, exploiting the spin state as another degree of freedom. This miniscule wire and switch can be produced on a preparative scale and may represent a relevant step in the development of nanoscale magnetic systems.