Copper nanomaterials with a cubic shape so perfect that they form neatly aligned stacks when brought together have been created by researchers at KAUST. The cuboid copper nanoclusters, developed by rational design, are a new member of an exotic nanomaterial family that has shown many promising properties but has remained very hard to make.

“Copper nanomaterials are a class of materials that exhibit useful properties for the fields of photoluminescence and catalysis,” says Ren-Wu Huang, a postdoc in Osman Bakr's lab, who led the research. There is great interest in synthesizing new copper nanomaterials to understand how their structure influences their function. 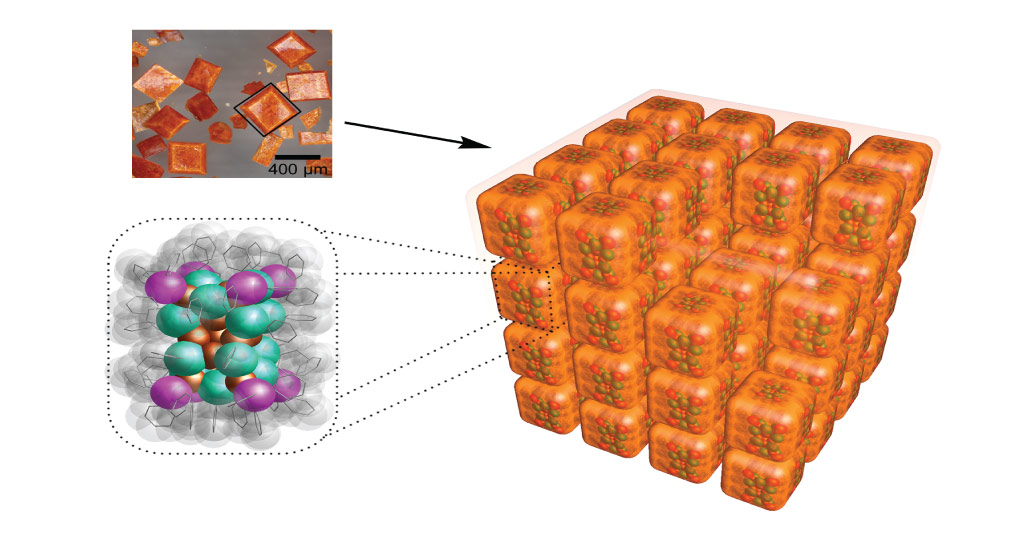 Copper nanoclusters, which are of an atomically precise structure, are among the few copper nanomaterials that can provide such insights at the atomic level because their total structure can be determined by single-crystal x-ray diffraction. “However, the synthesis of copper nanoclusters is still a great challenge and its pace of development is slow compared to nanoclusters made from its sister metals, silver and gold,” Huang adds.

In their latest work, the team aimed to make a hydrogen-rich polyhydrido copper nanocluster (PCN). “To create the cuboid-shaped nanoclusters, we added triphenylphosphine (Ph3P) to our synthesis reaction system,” says Bakr. Based on previously synthesized PCN structures, the team predicted that triphenylphosphine, with its rigid conical structure, would help to create a new nanocluster with a cuboid shape.

The dark-orange block-like crystals that the team isolated from the reaction mixture did prove to be a novel PCN structure with the predicted cuboid shape. Single-crystal x-ray diffraction showed that the heart of each nanocluster contained 23 copper atoms. Surrounding this core were eight triphenylphosphine groups, forming the eight corners of the cube.

Strikingly, each dark-orange crystal consisted of multiple cuboid nanoclusters, stacked neatly together in perfectly aligned rows and columns. “We found that the subtle synergy between the cuboid shape and the intercluster noncovalent bonding interactions, such as hydrogen bonding and van der Waals interactions, is the main driving force for the unique simple cubic self-assembly of nanoclusters,” Huang says.

Despite the team’s latest discoveries, copper nanocluster research is still in its infancy. “Crucial questions about the growth mechanism, structure evolution and structure-property relationships of clusters are yet to be addressed,” Bakr says. “We aim to shed light on those issues and to move forward with exploiting the potential of the clusters for important catalytic reactions.”


Read the original article on King Abdullah University of Science and Technology.