Scientists investigate a process that recycles nuclear and electronic waste materials to extend their lifetime and reduce expensive and invasive mining.

The Hawaii and Alaska of chemistry, lanthanides and actinides are the elements that are always shown separately from the main block on the periodic table. Although they are split up from the more mainstream elements, they are important metals for applications such as nuclear power and magnets used in wind turbines and electric cars. 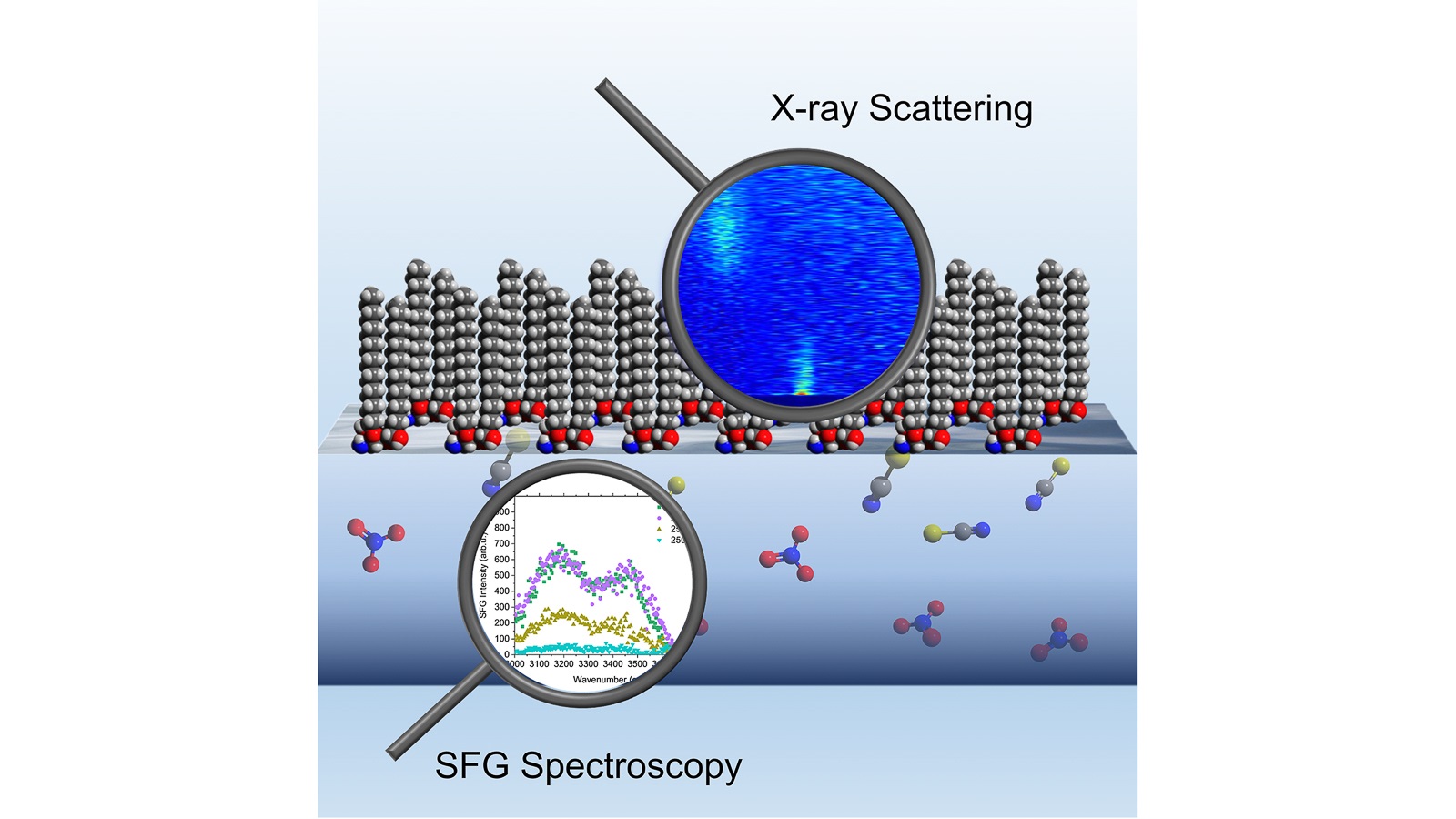 Waste products from these technologies are pervasive and long-lived, and they can present significant problems for the environment and economy. Lanthanides and actinides are often mixed together in nuclear waste, and electronic waste contains multiple lanthanide elements. Separating the metals from the waste allows them to be recycled, reducing the need for expensive and invasive mining.

“This research provided important insights that will enable effective and energy-efficient separation,” said Argonne chemist Ahmet Uysal. ​“Understanding this process will help with purification of critical materials for industrial applications.” 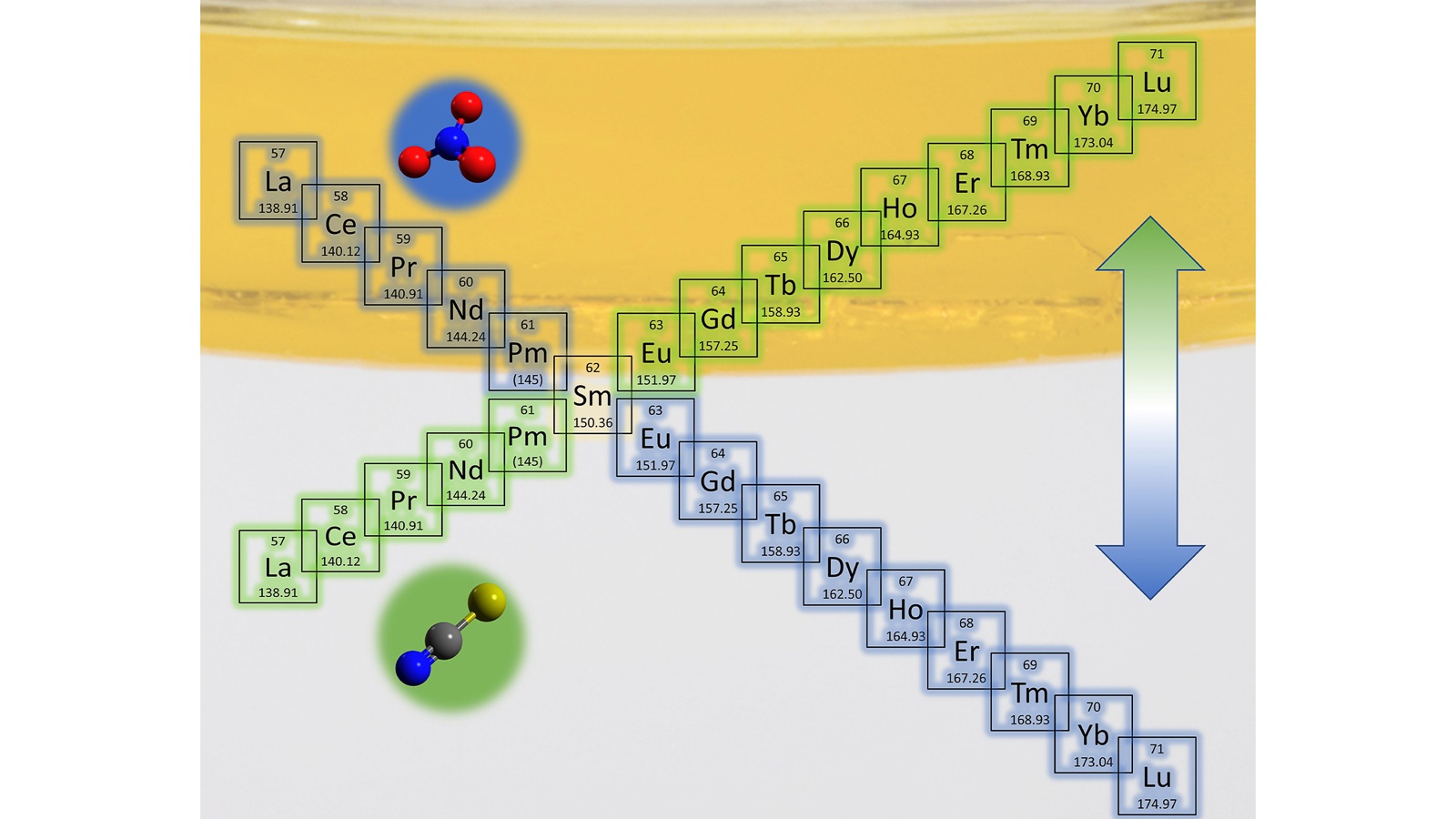 Choosing nitrate or thiocyanate as the background molecule completely reverses the selectivity trends in liquid-liquid extraction.

Scientists begin the separation process by dissolving the material in a strong acid. Then they mix the acid, which contains water, with oil and let the mixture settle. As the oil separates from the acid and water, molecules called extractants shuttle the desired metals from the water to the oil, readying the metal for reuse.

The goal is to target specific metals to extract, but since lanthanides and actinides behave very similarly, the process must be repeated hundreds of times to effectively separate them. To make extraction possible, the metals do not travel on their own — they are accompanied by water and added salts. These salts bind to the metals and help to draw them into the oil by working together with the extractant molecules.

In this study, the scientists investigated the addition of salts called nitrate and thiocyanate to understand how they interact differently with extractant molecules and metals. Specifically, they studied the fact that nitrate separates lighter lanthanides into the oil, whereas thiocyanate separates heavier lanthanides.

“As the metals get heavier, the efficiency drops for separation in nitrate mixtures, but increases for thiocyanate mixtures,” said Uysal. ​“It’s like a switch that reverses these trends, and if you run the processes back to back, it helps with separation because you can alternate pulling out the light and heavy lanthanides.”

The reason for this difference is an open question that the Argonne team helped to answer through X-ray scattering and spectroscopy techniques.

The scientists used the Sector 12 ID-C beamline at the Advanced Photon Source (APS), a DOE Office of Science User Facility at Argonne, to conduct an X-ray scattering experiment for elements ranging from the lightest to the heaviest lanthanides. Using the X-rays to determine the behavior of the molecules at extremely small scales, they observed differences in their organization in both nitrate and thiocyanate mixtures.

They discovered that thiocyanate works by disrupting the water structure at the interface, allowing heavier lanthanides to more easily travel into the oil. Nitrate, on the other hand, fits well within the existing structure of water at the interface and causes clustering, facilitating the transfer of mostly lighter lanthanides. ​“These results suggest that lanthanides are transported through different mechanisms in the presence of nitrate or thiocyanate,” said Uysal.

“Use of the brilliant photon source provided by the APS and a unique liquid surface X-ray technique was critical to the study of boundary structures between the extractant and metals,” said Wei Bu, a scientist at the ChemMatCARS (Chemistry and Materials Center for Advanced Radiation Sources) beamline at the APS. Scientists use this beamline to study materials at the atomic scale, including the interfaces between different liquids.

The team also used spectroscopy techniques to study the structures during the phase of the process where the molecules have been extracted into the oil. From this data, they developed a model of the process that describes the X-ray scattering data significantly better than existing models.

“Previous models required tuning of certain seemingly arbitrary parameters to fit the data,” said Srikanth Nayak, the first author on the study, ​“but with our new approach, each parameter has a physical meaning, and it helps us to make sense of the data and to draw more useful conclusions from it.”

“It is important to understand each step in this process, and our approach is unique in the way that we studied the structures in the oil and the interfacial structures in a complementary way,” said Uysal. This requires a team with diverse scientific backgrounds. For example, study author Kaitlin Lovering, now at Langara College in Canada, is an expert in laser spectroscopy, and Nayak specializes in X-ray scattering experiments. Both scientists were a crucial part of the team’s success, and their backgrounds reflect the multidisciplinary nature of the research.

A paper about the new model of the extraction process, ​“Ion-specific clustering of metal-amphiphile complexes in rare earth separations,” was published in Nanoscale. A second paper describing the interfacial structures during extraction, ​“The role of specific ion effects in ion transport: the case of nitrate and thiocyanate,” was published in the Journal of Physical Chemistry C.