Due to their tissue-like mechanical properties, hydrogels are being increasingly used for biomedical applications; a well-known example are soft contact lenses. These gel-like polymers consist of 90 percent water, are elastic and particularly biocompatible. Hydrogels that are also electrically conductive allow additional fields of application, for example in the transmission of electrical signals in the body or as sensors. An interdisciplinary research team of the Research Training Group (RTG) 2154 “Materials for Brain” at Kiel University (CAU) has now developed a method to produce hydrogels with an excellent level of electrical conductivity. What makes this method special is that the mechanical properties of the hydrogels are largely retained. This way they could be particularly well suited, for example, as a material for medical functional implants, which are used to treat certain brain diseases. The group’s findings were published on March 16, 2021 in the prestigious journal Nano Letters.

“The elasticity of hydrogels can be adapted to various types of tissue in the body and even to the consistency of brain tissue. This is why we are particularly interested in these hydrogels as implant materials,” explains materials scientist Margarethe Hauck, a doctoral researcher in RTG 2154 and one of the study’s lead authors. As such, the interdisciplinary collaboration of materials and medical scientists focuses on the development of new materials for implants, for example for the release of active substances to treat brain diseases such as epilepsy, tumours or aneurysms. Conductive hydrogels could be used to control the release of active substances in order to treat certain diseases locally in a more targeted manner. 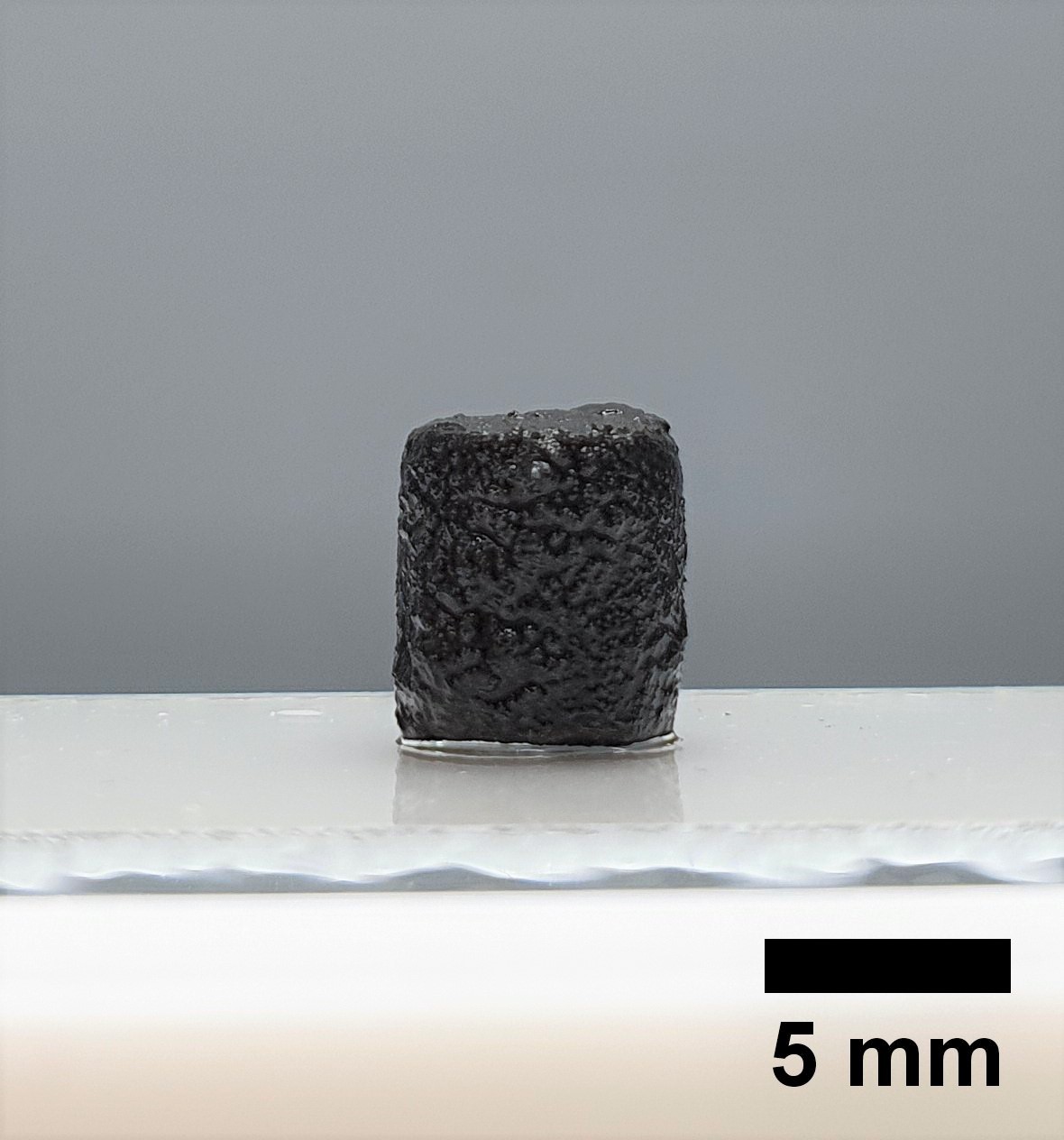 The electrically conductive hydrogel could be used for implants that could release medical active substances in a controlled manner to treat certain brain diseases.

In order to produce electrically conductive hydrogels, conventional hydrogels are usually mixed with current-conducting nanomaterials that are made of metals or carbon, such as gold nanowires, graphene or carbon nanotubes. To achieve a good level of conductivity, a high concentration of nanomaterials is often required. However, this alters the original mechanical properties of the hydrogels, such as their elasticity, and thus impacts their interaction with the surrounding cells. “Cells are particularly sensitive to the nature of their environment. They feel most comfortable with materials around them whose properties correspond as closely as possible to their natural surroundings in the body,” explains Christine Arndt, a doctoral researcher at the Institute for Materials Science at Kiel University and also lead author of the study. The hydrogel is streaked with microchannels of ultralight, electrically conductive graphene.

In close collaboration with various working groups, the research team was now able to develop a hydrogel that boasts an ideal combination: it is not only electrically conductive, but also retains its original level of elasticity. For the conductivity, the scientists used graphene, a material that has already been used in other production approaches. “Graphene has outstanding electrical and mechanical properties and is also very light,” says Dr Fabian Schütt, junior group leader in the Research Training Group, thus emphasising the advantages of the ultra-thin material, which consists of only one layer of carbon atoms. What makes this new method different is the amount of graphene used. “We are using significantly less graphene than previous studies, and as a result, the key properties of the hydrogel are retained,” says Schütt about the current study, which he initiated.

In order to achieve this objective, the scientists thinly coated a fine framework structure of ceramic microparticles with graphene flakes. Then they added the hydrogel polyacrylamide, which enclosed the framework structure, which was finally etched away. The thin graphene coating in the hydrogel remains unaffected by this process. The entire hydrogel is now streaked with graphene-coated microchannels, similar to an artificial nervous system.

Special 3D images by the Helmholtz-Zentrum Geesthacht (HZG) demonstrate the highly electronic conductivity of the channel system: “Due to a multitude of connections between the individual graphene tubes, electrical signals always find their way through the material and make it extremely reliable”, says Dr Berit Zeller-Plumhoff, Head of Department for Imaging and Data Science at HZG and an associate member in the RTG. With the help of high-intensity X-rays the mathematician took the images in a short time frame at the imaging beamline operated by the HZG at the storage ring PETRA III at the Deutsche Elektronensynchrotron DESY.  And the three-dimensional network has yet another advantage: its stretchability enables it to adapt relatively flexibly to its environment.

Further fields of application in biomedicine and soft robotics conceivable

“With the collaborations between different working groups, the RTG offers ideal conditions for biomedical research questions that require an interdisciplinary approach,” says Christine Selhuber-Unkel, first spokesperson of the RTG and now Professor of Molecular Systems Engineering at Heidelberg University. “This is a complex field of research as it combines both materials science and medicine and is likely to further develop enormously over the coming years, while the national and international demand for qualified specialists will increase – and this is what we want to prepare our doctoral researchers for in the best possible way,” adds her successor Rainer Adelung, Professor of Functional Nanomaterials at Kiel University and spokesperson of the RTG since 2020.

In the future, various additional applications of the new conductive hydrogel are possible: Margarethe Hauck plans to develop a hydrogel that reacts to small changes in temperature and could release active substances in the brain in a controlled manner. Christine Arndt is working on how electrically conductive hydrogels can be used as biohybrid robots. The force that cells exert on their environment could be used here to drive miniaturised robotic systems. 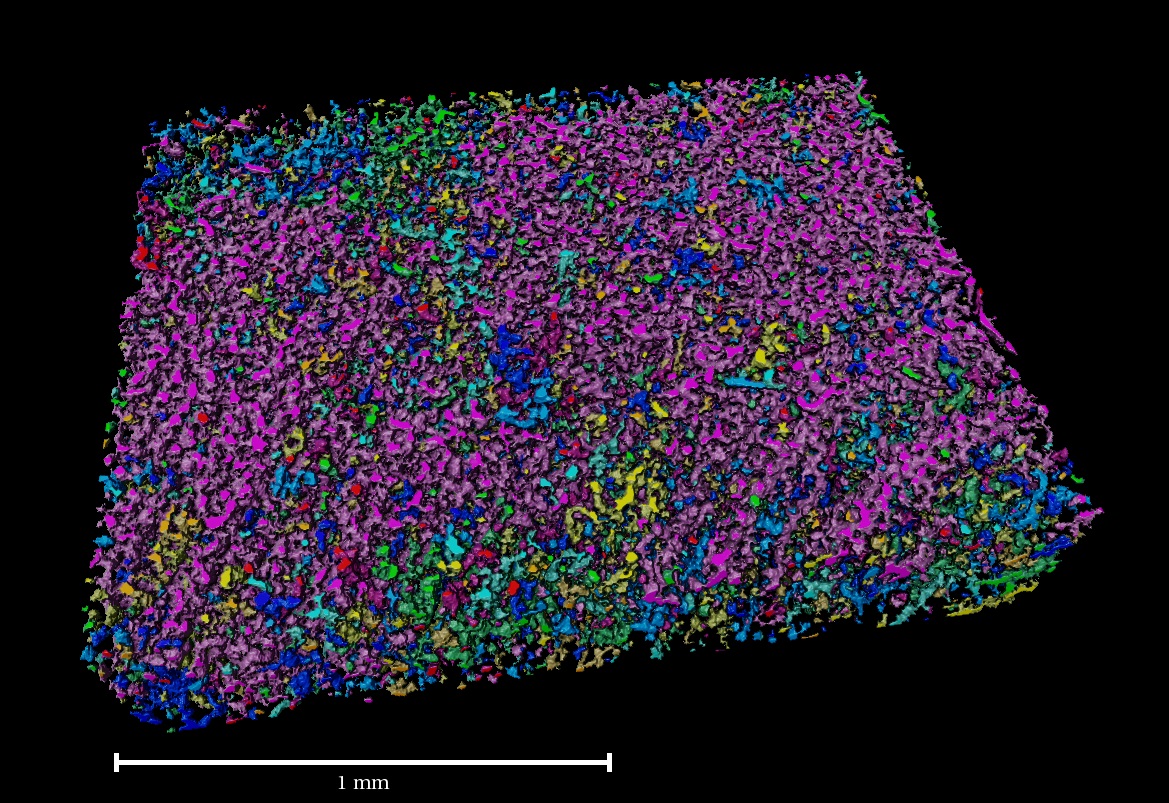 Each colour indicates a connected microchannel: the microcomputer tomography image clearly shows how interlinked the individual channels are – and thus how reliably electrical signals can flow through the entire material.