Cornell University researchers created micron-sized shape memory actuators that fold themselves into 3D configurations and allow atomically thin 2D materials with just a quick jolt of voltage. Once the material is bent, it holds its shape, even after the voltage is removed. 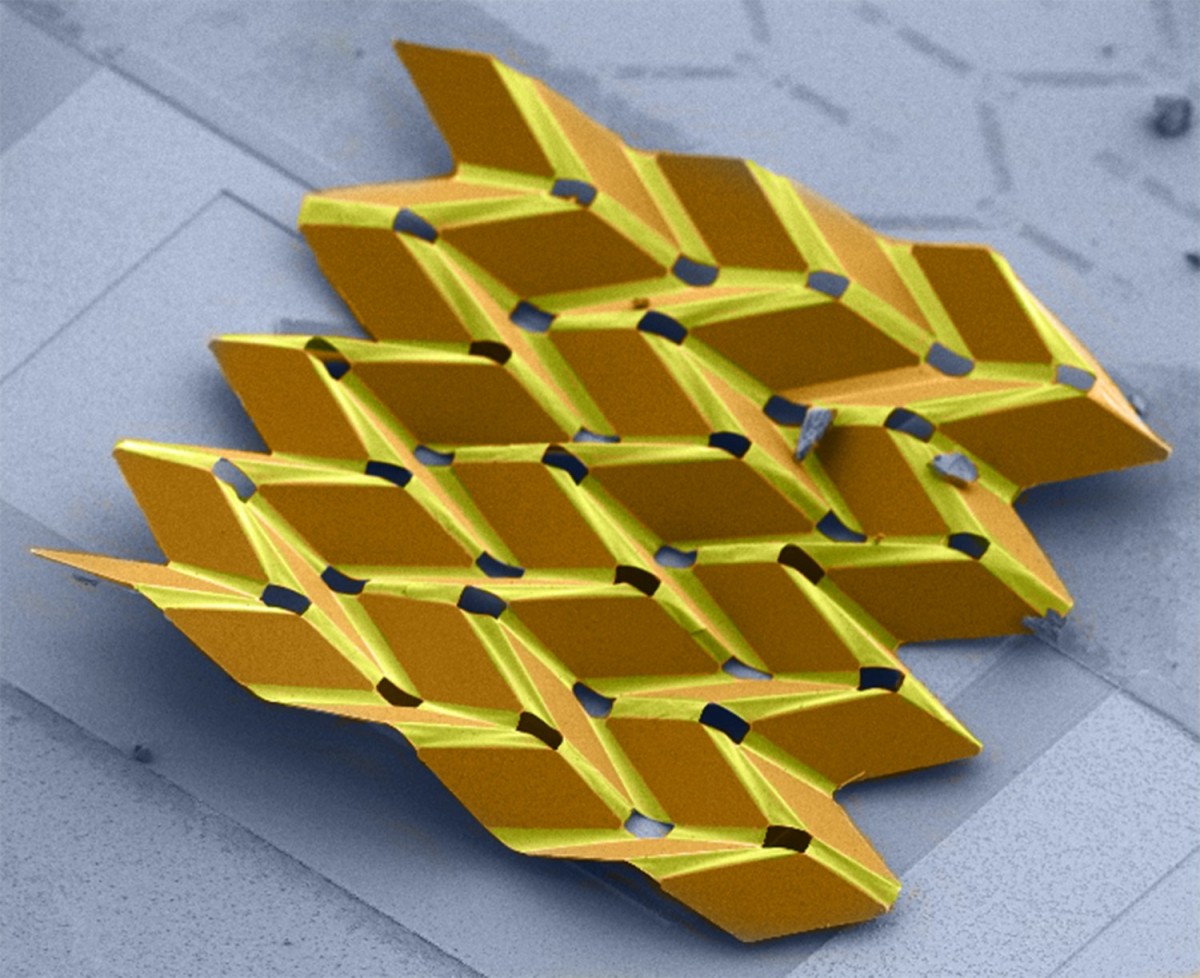 To demonstrate the technology, the team created what is potentially the world’s smallest self-folding origami bird.

“The research team is pushing the boundary of how quickly and precisely we can control motion at the micro- and even nano-scales,” said Dr. Dean Culver, program manager for Complex Dynamics and Systems at Army Research Office, an element of the U.S. Army Combat Capabilities Development Command, known as DEVCOM, Army Research Laboratory. “In addition to paving the way for nano-robots, the scientific advancements from this effort can enable smart material design and interaction with the molecular biological world that can assist the Army like never before.”

The research may result in future applications 10 to 20 years from now, he said.

In a peer-reviewed article published in Science Robotics, researchers said this work could make it possible for a million fabricated microscopic robots releasing from a wafer to fold themselves into shape, crawl free, and go about their tasks, even assembling into more complicated structures.

“We humans, our defining characteristic is we’ve learned how to build complex systems and machines at human scales, and at enormous scales as well,” said Prof. Paul McEuen, the John A. Newman Professor of Physical Science at Cornell University. “What we haven’t learned how to do is build machines at tiny scales.” 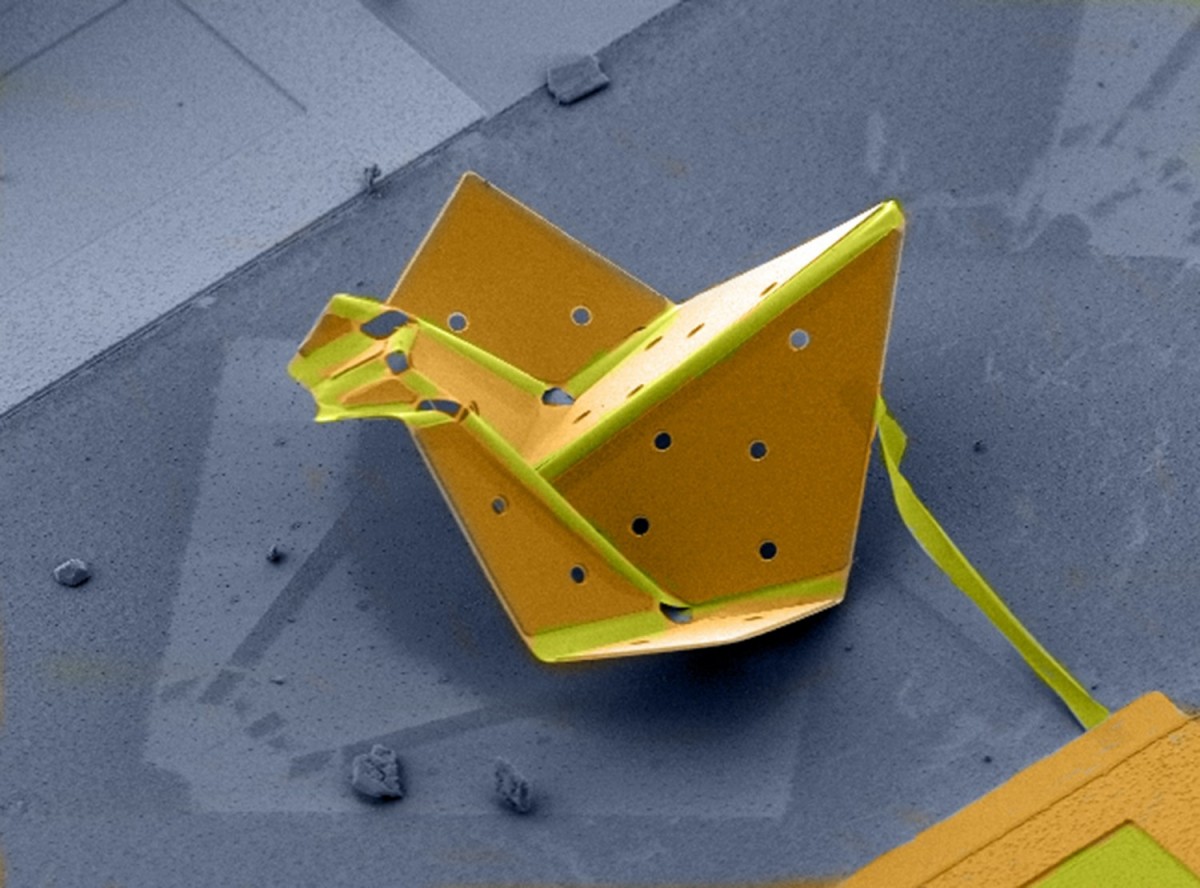 This is a step in that basic, fundamental evolution in what humans can do, of learning how to construct machines that are as small as cells, he said.

The researchers ongoing collaboration has generated a throng of nanoscale machines and components, each seemingly faster, smarter and more elegant than the last.

“We want to have robots that are microscopic but have brains on board,” said Prof. Itai Cohen, professor of physics at Cornell University. “That means you need to have appendages that are driven by complementary metal–oxide–semiconductor transistors, basically a computer chip on a robot that’s 100 microns on a side. The hard part is making the materials that respond to the CMOS circuits.”

This shape memory actuator developed by the research teams allows them to drive with voltage and make the materials hold a bent shape. The machines fold themselves fast–within 100 milliseconds. They can also flatten and refold themselves thousands of times and they only need a single volt to be powered to life.

“These are major advances over current state-of-the-art devices,” Cohen said. “We’re really in a class of our own.”

These actuators can bend with a radius of curvature smaller than a micron–the highest curvatures of any voltage-driven actuator by an order of magnitude. This flexibility is important because one of the bedrock principles of microscopic robot manufacturing is that the robot size is determined by how small the various appendages can be made to fold. The tighter the bends, the smaller the folds, and the tinier the footprint for each machine. It’s also important that these bends can be held by the robot, which minimizes the power consumption, a feature especially advantageous for microscopic robots and machines.

The devices consist of a nanometer-thin layer of platinum capped with a titanium or titanium dioxide film. Several rigid panels of silicon dioxide glass sit atop those layers. When a positive voltage is applied to the actuators, oxygen atoms are driven into the platinum and swap places with platinum atoms.

This process, called oxidation, causes the platinum to expand on one side in the seams between the inert glass panels, which bends the structure into its predesignated shape. The machines can hold that shape even after the voltage is removed because the embedded oxygen atoms bunch up to form a barrier, which prevents them from diffusing out.

By applying a negative voltage to the device, the researchers can remove the oxygen atoms and quickly restore the platinum to its pristine state. And by varying the pattern of the glass panels, and whether the platinum is exposed on the top or bottom, they can create a range of origami structures actuated by mountain and valley folds.

“One thing that’s quite remarkable is that these little tiny layers are only about 30 atoms thick, compared to a sheet of paper, which might be 100,000 atoms thick. It’s an enormous engineering challenge to figure out how to make something like that have the kind of functionalities we want,” McEuen said.

The team is currently working to integrate their shape memory actuators with circuits to make walking robots with foldable legs as well as sheet-like robots that move by undulating forward. These innovations may someday lead to nanorobots that can clean bacterial infection from human tissue, microfactories that can transform manufacturing and robotic surgical instruments that are 10 times smaller than current devices, according to Cohen.

The team is also researching the principles that need to change in order to design, manufacture and operate machines at this scale.

In addition to ARO, the National Science Foundation, the Cornell Center for Materials Research, the Air Force Office of Scientific Research, and the Kavli Institute at Cornell for Nanoscale Science funded the work.