The heart of any computer, its central processing unit, is built using semiconductor technology, which is capable of putting billions of transistors onto a single chip. Now, researchers from the group of Menno Veldhorst at QuTech, a collaboration between TU Delft and TNO, have shown that this technology can be used to build a two-dimensional array of qubits to function as a quantum processor. Their work, a crucial milestone for scalable quantum technology, was published today in Nature.

Quantum computers have the potential to solve problems that are impossible to address with classical computers. Whereas current quantum devices hold tens of qubits – the basic building block of quantum technology – a future universal quantum computer capable of running any quantum algorithm will likely consist of millions to billions of qubits. Quantum dot qubits hold the promise to be a scalable approach as they can be defined using standard semiconductor manufacturing techniques. Veldhorst: ‘By putting four such qubits in a two-by-two grid, demonstrating universal control over all qubits, and operating a quantum circuit that entangles all qubits, we have made an important step forward in realizing a scalable approach for quantum computation.’ 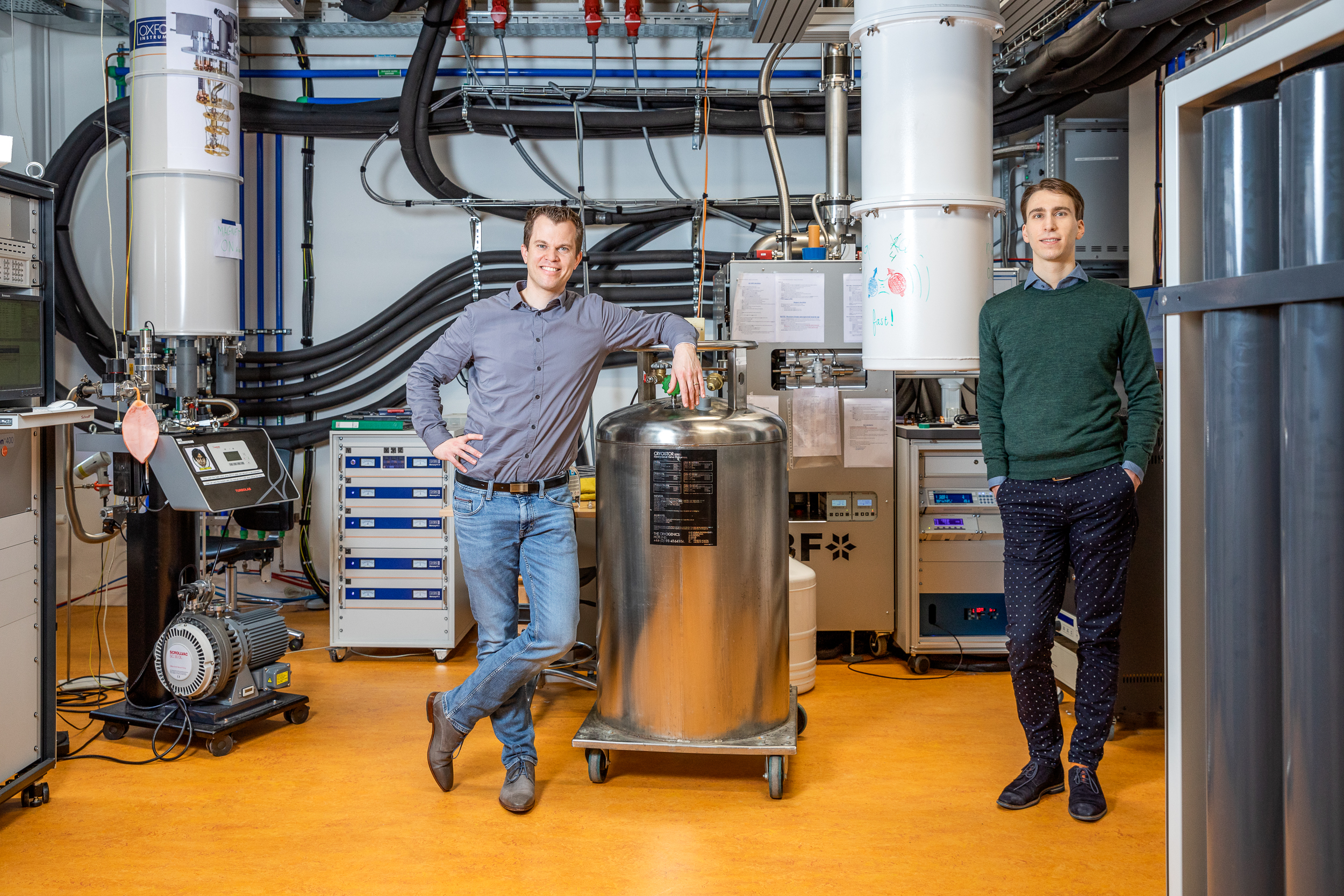 Menno Veldhorst and Nico Hendrickx standing next to the setup hosting the germanium quantum processor.

An entire quantum processor
Electrons trapped in quantum dots, semiconductor structures of only a few tens of nanometres in size, have been studied for more than two decades as a platform for quantum information. Despite all promises, scaling beyond two-qubit logic has remained elusive. To break this barrier, the groups of Menno Veldhorst and Giordano Scappucci decided to take an entirely different approach and started to work with holes (i.e. missing electrons) in germanium. Using this approach, the same electrodes needed to define the qubits could also be used to control and entangle them. ‘No large additional structures have to be added next to each qubit such that our qubits are almost identical to the transistors in a computer chip,’ says Nico Hendrickx, graduate student in the group of Menno Veldhorst and first author of the article. ‘Furthermore, we have obtained excellent control and can couple qubits at will, allowing us to program one, two, three, and four-qubit gates, promising highly compact quantum circuits.'

2D is key
After successfully creating the first germanium quantum dot qubit in 2019, the number of qubits on their chips has doubled every year. ‘Four qubits by no means makes a universal quantum computer, of course,’ Veldhorst says. ‘But by putting the qubits in a two-by-two grid we now know how to control and couple qubits along different directions.’ Any realistic architecture for integrating large numbers of qubits requires them to be interconnected along two dimensions. 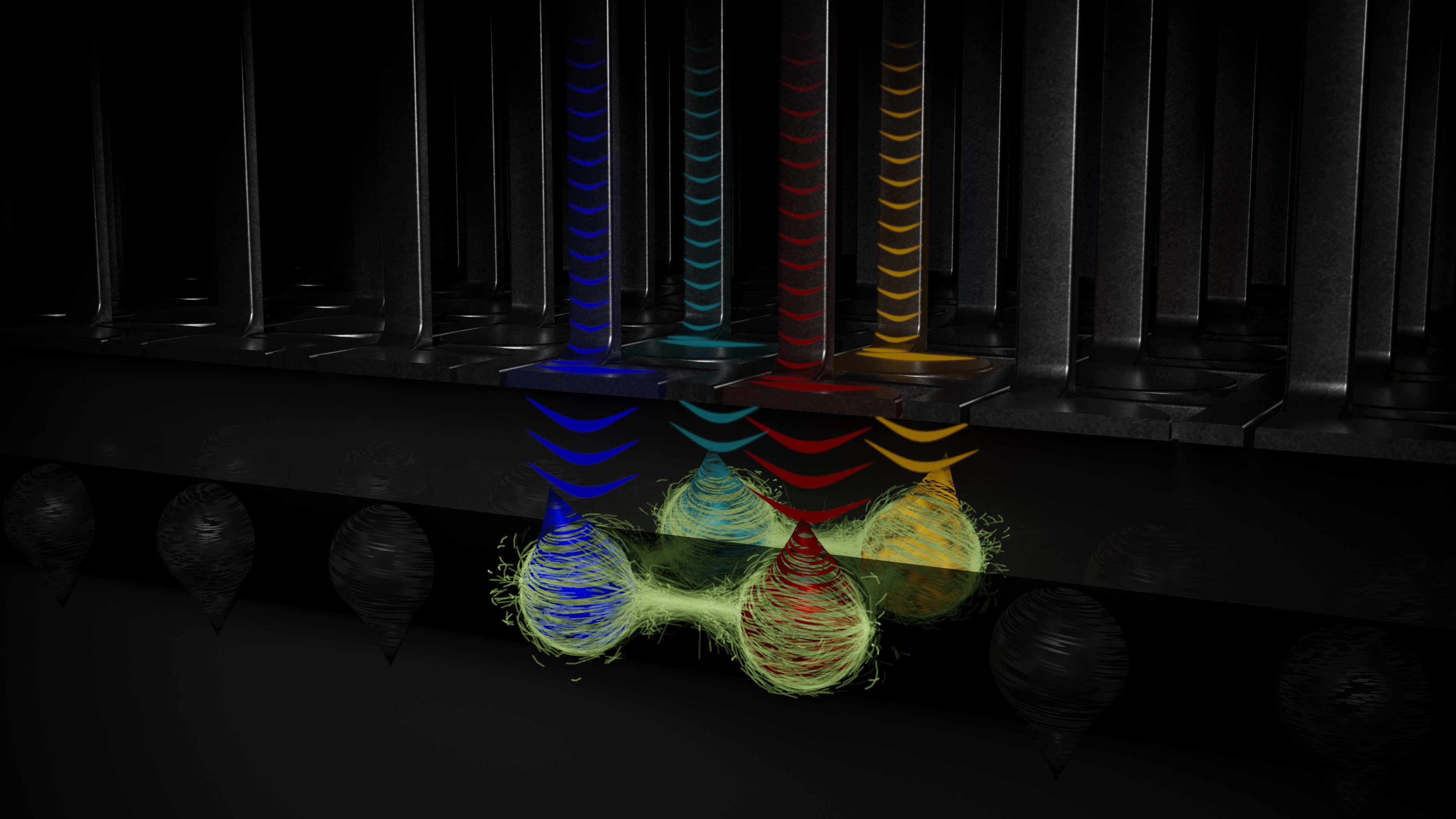 Germanium as a highly versatile platform
Demonstrating four-qubit logic in germanium defines the state-of-the-art for the field of quantum dots and marks an important step toward dense, and extended, two-dimensional semiconductor qubit grids. Next to its compatibility with advanced semiconductor manufacturing, germanium is also a highly versatile material. It has exciting physics properties such as spin-orbit coupling and it can make contact to materials like superconductors. Germanium is therefore considered as an excellent platform in several quantum technologies. Veldhorst: ‘Now that we know how to manufacture germanium and operate an array of qubits, the germanium quantum information route can truly begin.’