Perhaps the most frustrating limitation of owning an all-electric car is how long it takes to fully charge the battery. For a Tesla, for example, it takes about 40 minutes to charge it to 80% capacity using the most powerful charging station.

Scientists have long thought the laws of physics limited how fast you could safely recharge a battery, but new research by University of Utah chemical engineering assistant professor Tao Gao has opened the door to creating a battery that can be recharged in just a fraction of the time.

Gao’s research was detailed in a new paper published in the scientific journal Joule. The study, which can be read here, was conducted while Gao was a postdoctoral researcher at the Massachusetts Institute of Technology under the supervision of MIT chemical engineering professor Martin Z. Bazant. Gao is now carrying on that research at the University of Utah where he is further developing advanced lithium-ion batteries capable of fast charging. 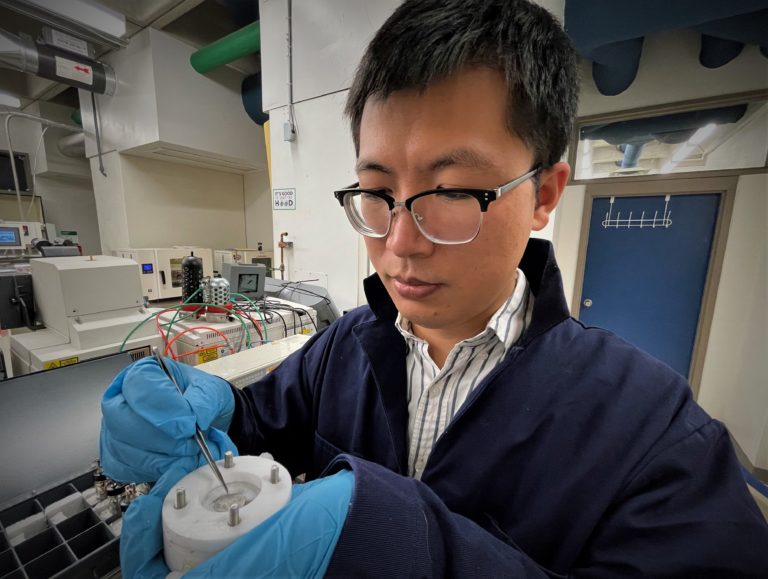 “This understanding lays the foundation for the future engineering work needed to address this challenge,” says Gao. “Now we know where to go. We have a clear vision of what needs to be done.”

Lithium-ion batteries have become a popular choice for portable electronics and all-electric vehicles because of their high energy density, low weight and long life. They are also used in laptop computers, portable electric appliances and for solar energy storage.

But how quickly a lithium-ion battery can recharge is hampered by a phenomenon known as “lithium plating,” a side reaction that happens when lithium ions are put into graphite particles too fast. Gao compares the operation of a lithium-ion battery to a ping pong ball being batted back and forth on a table. The ball, or lithium ion, travels from the positive electrode to the negative electrode during the charging process. The charging rate is similar to how fast the ball travels. Lithium plating occurs when the lithium ion moves too fast and the graphite particles in the battery fails to catch it, Gao explains. While charging, this can be hazardous and cause the battery to catch fire or explode, so that limits how quickly batteries can be recharged. It also can seriously degrade the battery, limiting its life.

Gao’s discovery reveals the important physics that govern the lithium plating phenomena in graphite particles during battery charging and enables the prediction of lithium plating in the operation of a battery.

“We designed an experiment that can visualize what happens to the negative electrode during charging. We can see the graphite particle – the material in the negative electrode – and we can see what happens during battery charging in real time,” he says. “Now we understand the physics. This provides us direction to address this limitation and improve battery charging performance.”

Gao believes that with this fresh understanding, new technologies could create a car battery that could be fully charged five times faster than normal, or in just over 10 minutes, without the risk of a hazard or degrading too quickly, he says. Smartphones, which typically take more than a half an hour with the fastest charger, could also be fully charged in just 10 minutes, he says.

Now that Gao and his co-researchers have a better grasp of the science behind lithium-ion charging, he believes we could see cell phones with better batteries in as little as three to five years and on all-electric cars in as soon as five to 10 years.

Read the original article on The College of Engineering at the University of Utah.