The current method of manufacturing carbon nanotubes--in essence rolled up sheets of graphene--is unable to allow complete control over their diameter, length and type. This problem has recently been solved for two of the three different types of nanotubes, but the third type, known as 'zigzag' nanotubes, had remained out of reach.

Researchers with Japan's National Institutes of Natural Sciences (NINS) have now figured out how to synthesize the zigzag variety. Their method is described in the journal Nature Chemistry, published on January 25.

Thanks to carbon's unique capacity to combine with other atoms to form molecules, when it combines with itself, it can do so in many structurally different ways (such as diamonds and graphite) with different properties. In recent decades, shapes such as graphene--a layer of carbon one atom thick formed from a hexagonal honeycomb-like lattice--have been produced. Another of these different forms, or 'allotropes,' that can be produced is a hollow cylinder of graphene known as a nanotube.

When the hexagons of carbon in the nanotube come together in this honeycomb lattice, they form either an armchair, zigzag or chiral configuration. The name 'zigzag' is used for the configuration in which the 'path' of each molecular bond between carbon atoms is directed first leftward by 60 degrees, then rightward by 60 degrees, then left 60 degrees, then right 60 degrees again: a zigzag pattern. The name 'armchair' describes a path that moves twice left, then twice right, before repeating. This pathway supposedly looks a bit like an armchair, hence the name. A third type, chiral, sits between these two forms, along with its mirror image. 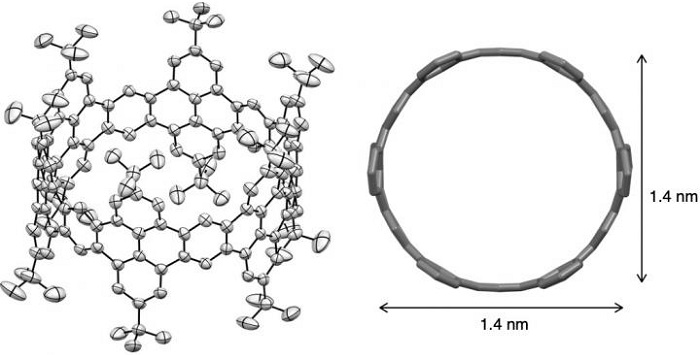 The molecular structure of zigzag carbon nanobelt by X-ray crystallography.

If one were able to take a knife and slice through these tubes twice horizontally against the lengthwise axis, one could produce a 'belt' of nanotube, composed of 12 carbon hexagonal rings. Such a belt is called a 'nanobelt'.

Efforts at production of these nanobelts have been the subject of much scholarly investigation. This is because of the limitations of conventional manufacture of nanotubes, which takes what is termed a 'top-down' form. Top-down manufacture involves the pulverizations of a bulk mass of carbon into a powder, after which the nanotubes randomly form themselves into one or more of the three configuration types. 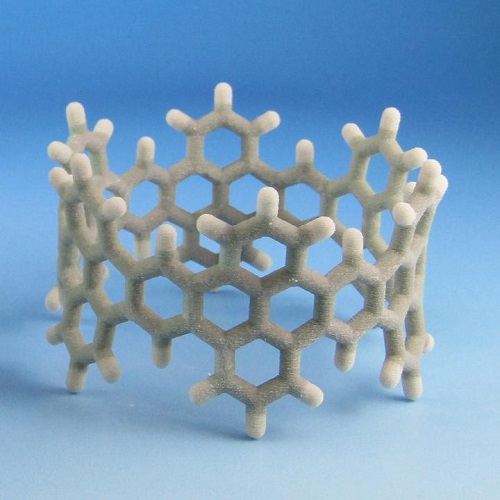 A model of the zigzag carbon nanobelt (with a magnification of 50 million) produced by a 3D printer at the Equipment Development Center, Institute for Molecular Science.

"The problem here is that you can't control which configuration type is formed, or the diameter, or even the length," said Yasutomo Segawa, of the Institute for Molecular Science at NINS and corresponding author for the paper. "But if you can build a nanotube from the bottom up, from the 'seed' of a nanobelt, then you control all these three aspects."

Previous research in 2019 had been able to produce armchair and chiral nanobelts, but not the third type - the zigzag.

And now for the first time, the researchers were able to form a zigzag nanobelt. The key to the nanobelt synthesis strategy was the bridging of the hexagonal rings by an oxygen atom (the addition of an oxanorbornadiene unit). They were then able to use X-ray crystallography to confirm that this structure, which had been predicted by theoretical calculations, was indeed forming in the real world.

With this third nanobelt synthesis, all three types of nanotubes--armchair, chiral, and zigzag--are in principle now available. This is a great step towards the bottom-up synthesis of carbon nanotubes made to order.