A new way to electrically generate rotation in materials made up of light elements could open the way for magnetic nanodevices.

The development of innovative magnetic nanodevices is one step closer to reality thanks to the observation by RIKEN physicists of a type of rotation that can be realized in materials consisting of light elements.

The ability to use electric currents to turn revolving mechanical parts led to the development of electric motors and caused an explosion in electrical devices. Now, physicists are trying to do the same thing but on a nanoscale. However, the development of innovative magnetic nanodevices requires the efficient electrical generation of rotation, or torque. 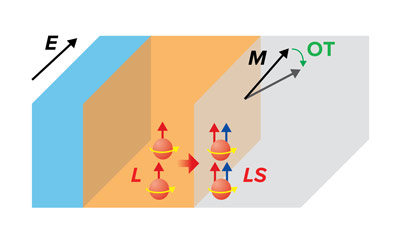 Usually, torque is generated in magnetic systems by converting electric charge to spin by using the strong spin–orbit interaction of a heavy-metal layer. The resulting spin current is then injected into adjacent ferromagnetic layers. But heavy-element materials are often incompatible with scalable production processes, and their high resistance makes them unsuitable for some applications.

A recent theoretical proposal suggested that torque could be produced by injecting orbital angular momentum into ferromagnetic layers. The orbital angular momentum can be generated by passing an electric current through light-element materials. It can then be converted to spin by the spin–orbit interaction of a ferromagnetic layer. This type of torque is called orbital torque, and it can be similar in magnitude to the torque induced by spin injection.

Now, Junyeon Kim, YoshiChika Otani and co-workers at the RIKEN Center for Emergent Matter Science, together with international collaborators, have realized such an efficient torque generation in three-layer systems composed of a ferromagnetic layer, a copper layer and an alumina (Al2O3) layer. Their results are reported in the journal Physical Review B.

In this system, the orbital angular momentum is generated at the copper–alumina interface and then transported by the copper layer to the ferromagnetic layer, where it is converted into spin.

While the torque-generation efficiency of this system rivaled that in materials containing heavy elements, the underlying physics is fundamentally different. The team found that the torque-generation efficiency varied by two orders of magnitude when different ferromagnetic layers were used. This is very different from the behavior of spin-injection systems, confirming that a new type of torque is at work.

A CoFe/Cu/Al2O3 trilayer system—the one that gave the best results—exhibited an effective spin Hall conductivity, which is proportional to the torque generation efficiency, ten times larger than that observed in heavy-element materials. This exceptional spin conductivity will translate to energy-efficient device operation and high cyclability thanks to lower production of waste heat. These results widen the material choices for magnetic nanodevices, promising remarkable efficiencies and the possibility of mass production.