What If Your Next Electric Car's Body Was Also Its Battery?

In 2019, nanotechnology company Nanom built a boat. But unlike your average sea-going vessel, the Magnea (as it was called) was built with a “structural battery carbon fiber” hull. In lay terms, they built a 500-kWh capacity cell right into the structure of the boat. For reference, the Tesla Model S has a battery capacity of 100-kWh. The company says that its nanotechnology that makes this possible could also reduce the price and weight, and increase the efficiency of the lithium-ion batteries currently powering EVs. Both are bold claims that could result in cheaper EVs with cells that last decades.

“The single biggest component cost of EVs is the battery, which currently averages close to $200/kWh," Sam Abuelsamid, principal analyst of Guidehouse Insights told Engadget. "If you can cut that down, you can take a major chunk out of the cost of EVs.” That huge slab of chemicals that keeps the vehicle moving on the road is potentially keeping the same vehicles from moving off of sales lots. For many consumers, it’s tough to justify the cash premium of an EV over a similar gas-powered vehicle. Federal and state tax subsidies help, but with prices starting in the mid-$30,000 range, EVs are not quite ready for the mainstream. 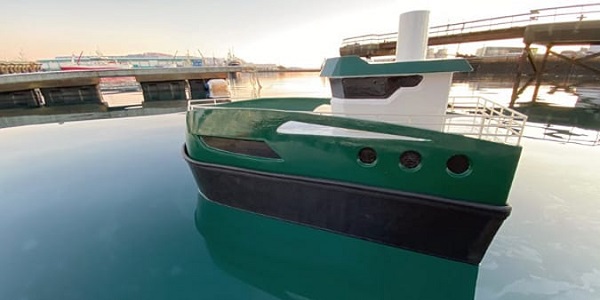 That’s where Nanom believes it can help. The company says that by creating nanoparticles of some of the chemical components used in batteries, it can not only make them more efficient, but it can also increase the flow of electricity and reduce the long-term capacity degradation of batteries. It expects the energy density, lifespan and recharge rate of these batteries to increase by more than nine times of what is currently on the market. The lifespan storage is especially impressive. Like your smartphone, EV batteries lose some of their capacity over time as the device is charged and used. Nanom claims it can essentially tune the particle size of the chemical elements in a battery, which could create a cell that it predicts will last for 50,000 cycles.

If you were to discharge and recharge an EV battery capable of 50,000 cycles every day, it would take 137 years before the battery lost its capacity. The surprising thing is, the chemistry behind all of this isn’t totally new. The design of the Nanom battery uses the same technology as the nickel–iron battery patented by Thomas Edison in 1901. These batteries were and are known for their ability to last years, even decades. Nanom just removed the heavy iron and nickel plates and replaced them with iron and nickel nanoparticles.

The company says that its nanoparticles increase the size and surface of a battery’s electrodes. The way power is generated in a battery is that an electric current is created when lithium ions move from the negative electrode (anode) to the positive electrode (cathode). Because Nanom says it's increased the amount of electrodes, the result is a battery with a higher energy density. It’s a bit like if you replaced 50 large adults in a space making widgets with 150 small specially trained children in the same space making widgets. The kids take up less space than the adults and produce widgets at the same speed. The result is more widgets produced in the same area. (Editor’s note: We do not condone child labor in the widget industry.)

As with all battery news, it’s important to understand that the war to build better storage for electricity is being fought by potentially thousands of companies. There’s a lot of hype. Something is always just on the horizon that will change everything and make EVs cheaper. If it’s not nanoparticles, it’s solid-state batteries. We’re told time and again, something huge is coming but essentially companies are still refining the lithium-ion chemistry that powers our cars, phones and laptops. 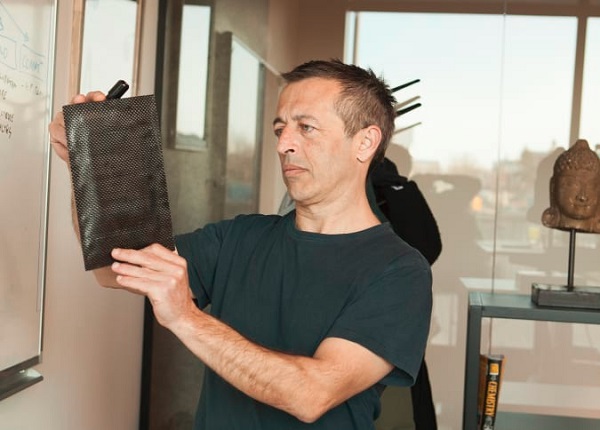 Initially, Nanom wants to fix the downsides of the current battery technology. CEO and founder Armann Kojic says that the manufacturer's nanoparticle technology can be implemented into the current process. Essentially Nanom figures out the needs of the company and creates a chemical mixture that can be dropped in a business's battery packs. The result is a cell that’s more efficient, has a higher density, and has a low cost per kWh.

From there it can work on its nano-carbon structural battery. The company creates a carbon fiber weave that integrates a cathode and anode and uses a silk or fiberglass electrolyte separator. Those are all the elements of a battery, except now it’s a component that can be used as a structure. In the future, the company believes planes, boats, cars and other items could benefit from this battery material, which Kojic says will continue to work even when punctured, and will only deliver electricity to the connections built into it. So you won’t get a shock if you touch their 500-kWh battery boat.

However this plays out, even if Nanom can only improve EV batteries by 50 percent of what they promise, it’ll be a huge saving for automakers that’ll be passed on to consumers (we hope). Kojic says that the company is in advanced talks with an automotive component manufacturer and that it’s currently in preliminary talks with a major automaker. Kojic wouldn’t share any information beyond that.

As for the hype, Kojic says that the company has had arguments with scientific institutions that didn’t want to measure what was coming out of the company’s labs. Then, after seeing and measuring what Nanom had, they apologized, according to the CEO. Battery tech announcements are a bit like tales about the fish that got away. A lot of talk and not much actual proof. Remember, Nanom has a boat and maybe, just maybe, it actually caught the fish — in this case, one that brings a cheaper, long-lasting battery to the world. If true, it’s landed itself a whopper.