QUT researchers have used carbon dots, created from human hair waste sourced from a Brisbane barbershop, to create a kind of “armour” to improve the performance of cutting-edge solar technology.

In a study published in the Journal of Materials Chemistry A, the researchers led by Professor Hongxia Wang in collaboration with Associate Professor  Prashant Sonar  of QUT’s Centre for Materials Science showed the carbon nanodots could be used to improve the performance of perovskites solar cells.

Perovskites solar cells, a relatively new photovoltaic technology, are seen as the best PV candidate to deliver low-cost, highly efficient solar electricity in coming years. They have proven to be as effective in power conversion efficiency as the current commercially available monocrystalline silicon solar cells, but the hurdles for researchers in this area is to make the technology cheaper and more stable.

Unlike silicon cells, they are created with a compound that is easily manufactured, and as they are flexible they could be used in scenarios such as solar-powered clothing, backpacks that charge your devices on the go and even tents that could serve as standalone power sources.

This is the second major piece of research to come as a result of a human hair derived carbon dots as multifunctional material.

Last year, Associate Professor Prashant Sonar led a research team, including Centre for Materials Science research fellow Amandeep Singh Pannu, that turned hair scraps into carbon nanodots by breaking down the hairs and then burning them at 240 degrees celsius. In that study, the researchers showed the carbon dots could be turned into flexible displays that could be used in future smart devices. 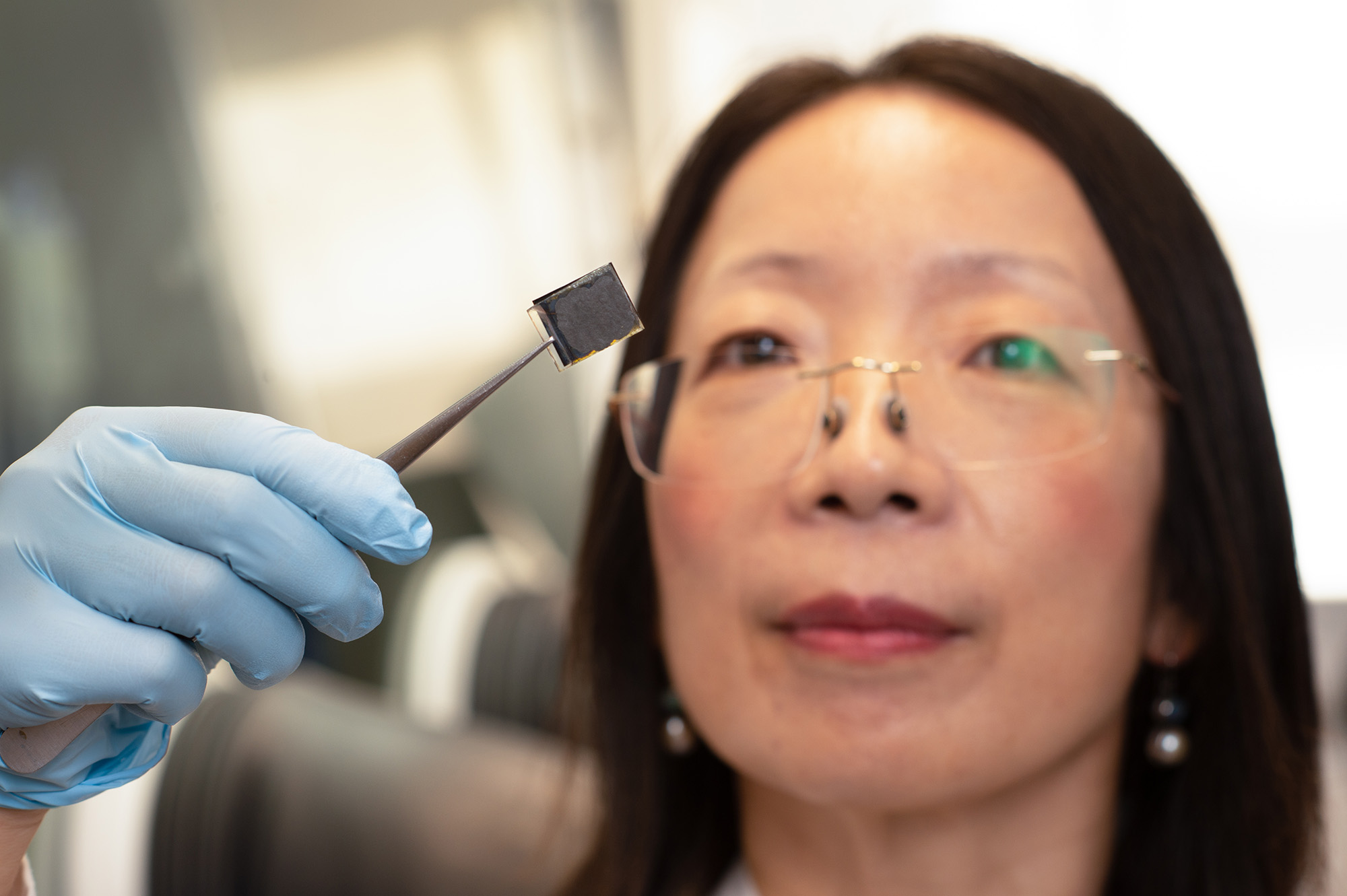 “It creates a kind of protective layer, a kind of armour,” Professor Wang said.

“It protects the perovskite material from moisture or other environmental factors, which can cause damage to the materials.”

Professor Wang has been researching advanced solar cells for about 20 years, and working with perovskite cells since they were invented about a decade ago, with the primary objective of developing cost-effective, stable photovoltaics materials and devices, to help solve the energy issue in the world.

“The big challenges in the area of perovskite solar cells are solving stability of the device to be able to operate for 20 years or longer and the development of a manufacturing method that is suitable for large scale production.

“Currently, all the reported high-performance perovskite solar cells have been made in a controlled environment with extremely low level of moisture and oxygen, with a very small cell area which are practically unfeasible for commercialisation.

“This can only be achieved through a deep understanding of the material properties in large-scale production and under industrially compatible conditions.”

Professor Wang is particularly interested in how perovskite cells could be used in the future to power spacecrafts.

The International Space Station is powered by four solar arrays, which can generate up to 120 kW of electricity. But one disadvantage of the current technology of space PVs is the weight of the payload to get them there.

While perovskite would be much lighter, one of the challenges for researchers is to develop perovskite cells able to cope with the extreme radiation and broad range of temperature variation in space – from minus 185 degrees to more than 150 degrees Celsius.

Professor Wang said the solution could be ten years off, but researchers were continuing to gain greater insights in the area.

Currently Professor Wang’s research team is collaborating with Professor Dmitri Golberg in the QUT Centre for Materials Science to understand the properties of perovskite materials under extreme environmental conditions such as strong irradiation of an electron beam and drastic temperature change.

“I’m quite optimistic given how much this technology has improved so far,” Professor Wang said.

Read the original article on Queensland University of Technology (QUT).