Abandoning the Old Ways: Progress in the Low-cost Electrochemical Synthesis of Ammonia

Scientists from Daegu Gyeongbuk Institute of Science and Technology developed a high-performing electrocatalyst to synthesize ammonia in an effort to replace conventional eco-unfriendly methods.

Ammonia (NH3) is mass-produced for use in the agricultural, pharmaceutical, and sustainable energy sectors. However, its conventional synthesis methods are environmentally unfriendly, so we need alternatives! Recently, Scientists from Daegu Gyeongbuk Institute of Science and Technology, Korea, developed a new cost-effective and durable electrocatalyst that mimics a natural enzyme to produce NH3 from nitrogen in the air. Their findings take us a step closer to safer and cleaner ways to electrochemically produce NH3.

Ammonia (NH3) is among the most important chemicals produced by humans and  has a promising future in sustainable energy applications besides being used in fertilizer production. Unfortunately, so far, the only realistic way that exists to produce ammonia at an industrial scale is through the Haber–Bosch process. This technique, discovered in the 19th century, is very energy-intensive and environmentally unfriendly; about 2% of the yearly global CO2 emissions come from Haber–Bosch processes.

By mimicking some of the properties of nitrogenase, scientists developedan electrocatalyst capable of producing ammonia from atmospheric nitrogen. This could help us steer away from the conventional Haber–Bosch process, which is a significant source of CO2.

“Considering the threats posed by global warming, it is high time we swap to an ammonia synthesis route with zero CO2 emissions,” says Professor Sangaraju Shanmugam from Daegu Gyeongbuk Institute of Science and Technology (DGIST), Korea. Shanmugam and colleagues at DGIST have been working on finding new ways to produce ammonia through electrochemical reactions at room temperature using the nitrogen (N2) naturally present in air, a process technically known as ‘electrocatalytic fixation of atmospheric N2.’

Although various research groups have successfully developed catalysts for electrochemical cells with high ammonia production rates, many suffer from low efficiency and selectivity towards N2. Others require precious metals or complex synthesis processes, which limits their applicability on an industrial scale. In a recent study published in Applied Catalysis B: Environmental, DGIST scientists led by Prof.Shanmugam tackled all these issues with a novel catalyst for electrochemical ammonia synthesis. 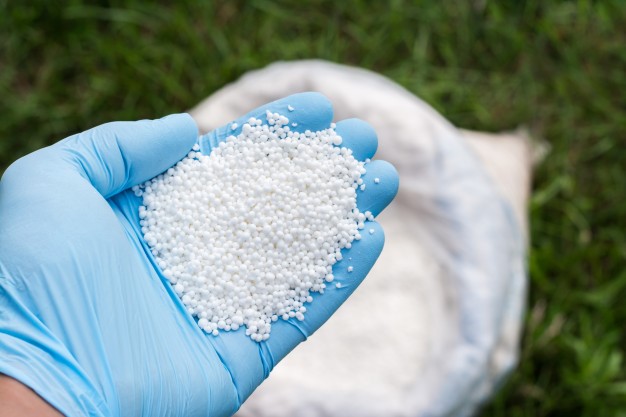 Over 200 million tons of ammonia are produced each year, most of which is used as a fertilizer.Thus, it is essential to find scalable ecofriendly synthesis routes to satisfy the globaldemand while protecting the environment.

Their approach is based on molybdenum nitride (Mo2N) nanoparticles, which share electrical properties with the enzyme nitrogenase that some bacteria use to produce ammonia in nature. Nanoparticles alone don’t make the cut; however, because they tend to stick to each other, this agglomeration reduces the total surface area that is exposed to N2 and thus hinders the catalyst’s performance. To combat this problem, the scientists produced two-dimensional hexagonal boron nitride (h-BN) sheets and tailored them to contain defects. These defects—boron and nitrogen vacancies—provided sites for the Mo2N nanoparticles to anchor themselves without agglomerating much.

With this catalyst, the team managed to synthesize ammonia at a high rate with an efficiency of 61.5% in a stable and robust way. Most notably, the entire fabrication process of the low-cost Ү-Mo2N/h-BN catalyst can be done in a single step, which makes it an attractive option in terms of industrial scalability. Furthermore, the study provided important insight into how the size of the nanoparticles affects the selectivity of the catalyst for nitrogen fixation.  Prof.  Shanmugam observes: “We believe our work will greatly contribute to the development of efficient catalysts. Advancing alternative technologies for the production of valuable chemicals like ammonia via electrocatalytic methods shall pave the way for a cleaner and safer environment.”

Hopefully, further studies will finally allow us to abandon the methods of yesterday in favor of the sustainable alternatives of tomorrow.

Read the original article on Daegu Gyeongbuk Institute of Science and Technology (DGIST).