ANSTO has contributed to a comprehensive investigation of a promising type of nanoparticle that could potentially be used for intractable brain cancers in a combined therapy.

The study, which was led by Dr Moeava Tehei and researchers from the University of Wollongong in combination with clinical partners, characterised and evaluated the properties of nanoparticles made from lanthanum manganite, that were doped with silver atoms.

The investigators found that the nanoparticles had potential clinical application for their synergistic effects to be used in combination with radiation treatment, hyperthermia (using heat to kill cancer cells) and their intrinsic toxicity to cancer cells. The research was published in Materials Science & Engineering C. 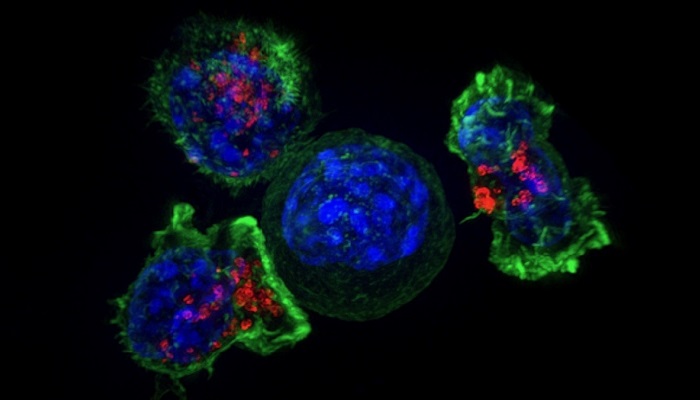 Nanoparticles are small enough to cross the blood brain barrier that prohibits other therapies. In addition to a wide variety of other methods of analysis, studies of the magnetic properties were undertaken at ANSTO.

The magnetic properties were important because they could be used to get the nanoparticles to the target cancer site and in magnetic hyperthermia treatment.

Dr Kirrily Rule, a co-author on the paper, supervised investigations of magnetic and chemical changes to nanoparticles of silver-doped lanthanum manganite at two temperatures on the high-resolution powder diffractometer Echidna at ANSTO’s Australian Centre for Neutron Scattering.

Although an expert in the magnetic behaviour of low-dimensional materials with quantum properties, Rule said she was excited by the opportunity to change focus and assist in medical physics-related research.

The magnetism measurements on Echidna were performed at 10 degrees Kelvin and 300 Kelvin. At about 300 degrees Kelvin, close to body-temperature, the magnetic ordering stops.

“There is a critical temperature region for hyperthermia treatment,” said Rule.

The magnetisation results indicated that the nanomaterial was more likely to order ferromagnetically, and that the ordering temperature when the magnetic moments aligned, was higher for a higher percentage of silver.

“So, it appears that the silver was responsible for the higher transition temperatures of these nanoparticles,” said Rule.

The most promising sample for hyperthermia and cancer toxicity was lanthanum manganite that was doped with a 10 per cent concentration of silver, as it retained a level of ferromagnetism at 300 degrees Kelvin.

However, Dr Tehei said that the 5 per cent doping may turn out to be the most interesting when combined with radiation because of its selectivity and cancer toxicity.

This suggested to the investigators that the temperature range for hyperthermia treatments could be manipulated by modifying the doping percentage.

Importantly, the biological effects of the nanoparticles and doped nanoparticles were toxic to cancer cells but not the normal cells.

The research helped elucidate how the doped nanoparticles were killing cancer cells by producing high levels of reactive oxidative stress.