Glass, rubber and plastics all belong to a class of matter called amorphous solids. In spite of how common they are in our everyday lives, amorphous solids have long posed a challenge to scientists.

Since the 1910s, scientists have been able to map in 3D the atomic structures of crystals, the other major class of solids, which has led to myriad advances in physics, chemistry, biology, materials science, geology, nanoscience, drug discovery and more. But because amorphous solids aren't assembled in rigid, repetitive atomic structures, as crystals are, they have defied researchers' ability to determine their atomic structure with the same level of precision.

UCLA-led research published in the journal Nature reports on the first-ever determination of the 3D atomic structure of an amorphous solid -- in this case, a material called metallic glass. 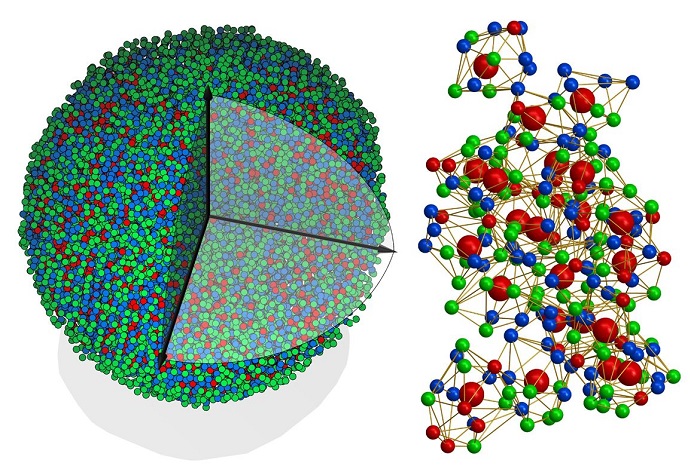 An experimental 3D atomic model of a metallic glass nanoparticle, 8 nanometers in diameter.

"We know so much about crystals, yet most of the matter on Earth is non-crystalline, and we know very little about its atomic structure," said the U.S. National Science Foundation-funded study's senior author, Jianwei "John" Miao.

Metallic glass tends to be both stronger and more shapeable than standard crystalline metals. It is used today in products ranging from electrical transformers to high-end golf clubs and the housings for Apple laptops and other electronic devices. Understanding the atomic structure of metallic glasses could help engineers design better versions of these materials, for a wider array of applications.

The researchers used a technique called atomic electron tomography, a type of 3D imaging pioneered by Miao and collaborators. The approach involves beaming electrons through a sample and collecting an image on the other side. The sample is rotated so measurements can be taken from multiple angles, yielding data that is stitched together to produce a 3D image.

"This groundbreaking result exemplifies the power of a transdisciplinary team," said Charles Ying, a program director in NSF's Division of Materials Research. "It demonstrates the need for long-term support of a center to address this type of complex research project."