Graphene excels at removing contaminants from water, but it’s not yet a commercially viable use of the wonder material. That could be changing.

In a recent study, University at Buffalo engineers report a new process of 3D printing graphene aerogels that they say overcomes two key hurdles — scalability and creating a version of the material that’s stable enough for repeated use — for water treatment.

“The goal is to safely remove contaminants from water without releasing any problematic chemical residue,” says study co-author Nirupam Aich, PhD, assistant professor of environmental engineering at the UB School of Engineering and Applied Sciences. “The aerogels we’ve created hold their structure when put in water treatment systems, and they can be applied in diverse water treatment applications.” 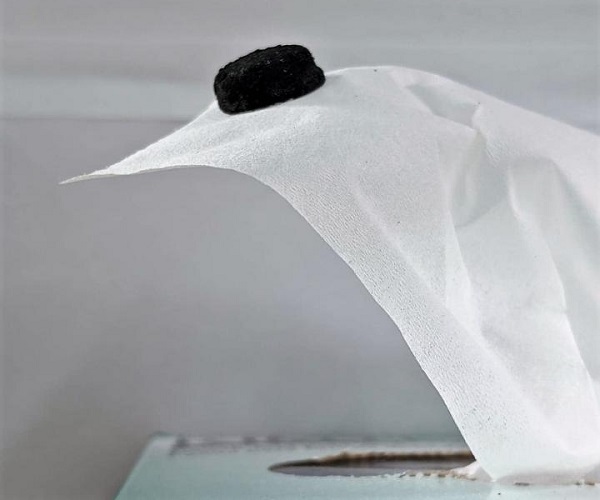 Graphene is incredibly light. This aerogel, used for filtering water, sits atop a single tissue.

The study — “3D printed graphene-biopolymer aerogels for water contaminant removal: a proof of concept” — was published in the Emerging Investigator Series of the journal Environmental Science: Nano. Arvid Masud, PhD, a former student in Aich’s lab, is the lead author; Chi Zhou, PhD, associate professor of industrial and systems engineering at UB, is a co-author.

An aerogel is a light, highly porous solid formed by replacement of liquid in a gel with a gas so that the resulting solid is the same size as the original. They are similar in structural configuration to Styrofoam: very porous and lightweight, yet strong and resilient.

Graphene is a nanomaterial formed by elemental carbon and is composed of a single flat sheet of carbon atoms arranged in a repeating hexagonal lattice.

To create the right consistency of the graphene-based ink, the researchers looked to nature. They added to it two bio-inspired polymers — polydopamine (a synthetic material, often referred to as PDA, that is similar to the adhesive secretions of mussels), and bovine serum albumin (a protein derived from cows).

In tests, the reconfigured aerogel removed certain heavy metals, such as lead and chromium, that plague drinking water systems nationwide. It also removed organic dyes, such as cationic methylene blue and anionic Evans blue, as well as organic solvents like hexane, heptane and toluene.

To demonstrate the aerogel’s reuse potential, the researchers ran organic solvents through it 10 times. Each time, it removed 100% of the solvents. The researchers also reported the aerogel’s ability to capture methylene blue decreased by 2–20% after the third cycle.

The aerogels can also be scaled up in size, Aich says, because unlike nanosheets, aerogels can be printed in larger sizes. This eliminates a previous problem inherent in large-scale production, and makes the process available for use in large facilities, such as in wastewater treatment plants, he says. He adds the aerogels can be removed from water and reused in other locations, and that they don’t leave any kind of residue in the water. 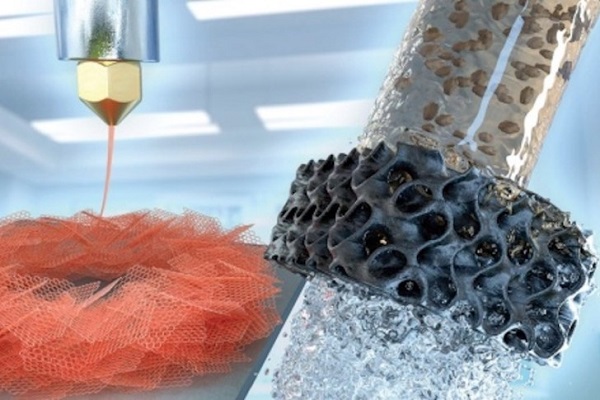 This illustration depicts, at the left, a 3D printer printing the hexagonal-shaped graphene aerogel sheet. At the right, the aerogel (now black) filters dirty water.

Aich is part of a collaboration between UB and the University of Pittsburgh, led by UB chemistry professor Diana Aga, PhD, to find methods and tools to degrade per- and polyfluoroalkyl substances (PFAS), toxic materials so difficult to break down that they are known as “forever chemicals.” Aich notes the similarities to his work with 3D aerogels, and he hopes results from the two projects can be brought together to create more effective methods of removing waterborne contaminants.