Hafnium-based thin films, with a thickness of only a few nanometres, show an unconventional form of ferroelectricity. This allows the construction of nanometre-sized memories or logic devices. However, it was not clear how ferroelectricity could occur at this scale. A study that was led by scientists from the University of Groningen showed how atoms move in a hafnium-based capacitor: migrating oxygen atoms (or vacancies) are responsible for the observed switching and storage of charge. The results, which were published online by the journal Science on 15 April, point the way to new ferroelectric materials.

Ferroelectric materials exhibit spontaneous polarization, which can be reversed or switched using an electric field. It is used in non-volatile memories or the construction of logic devices. One drawback of these materials is that when the size of the crystals is reduced to below a certain limit, the ferroelectric properties are lost. However, some years ago, it was suggested that hafnium-based oxides could exhibit ferroelectricity at nanoscale dimensions.

Microscope
In 2018, a team led by Beatriz Noheda, Professor of Functional Nanomaterials at the University of Groningen, confirmed these special properties of hafnium oxides. ‘However, we didn’t know exactly how this ferroelectricity occurred,’ she says. ‘We knew that the mechanism in these hafnium-based thin membranes is different. As ferroelectric switching is something that occurs at an atomic scale, we decided to study how the atomic structure of this material responds to an electric field, both using the powerful x-ray source at the MAX-IV synchrotron in Lund and our formidable electron microscope in Groningen.’

The University houses a state-of-the-art electron microscope at the electron microscopy centre of the Zernike Institute for Advanced Materials, with which the group of Bart Kooi, co-author of the Science paper, successfully imaged the lightest atoms in the periodic table – hydrogen – for the first time in 2020. This is where first author Pavan Nukala comes in. He worked as a Marie Curie Research Fellow at the University of Groningen and had a background in electron microscopy and materials science, especially in these ferroelectric hafnium systems.

Oxygen
However, if the preparation of a sample for the imaging of atoms is tricky, then the need to apply an electric field across a device in situ increases the difficulty by several orders of magnitude. Luckily, at around the same time, Majid Ahmadi (a master in in situ experiments) joined Kooi’s group. ‘All of us were quite convinced that if there was one place where switching of hafnium could be visualized in situ at an atomic scale, it would be here at the ZIAM electron microscopy centre. It benefits from a unique combination of the right expertise in materials science, microscopy and infrastructure,’ Noheda explains.

The proper protocols for building hafnium-based electron-transparent capacitors using focused ion beam facility were developed by Ahmadi and Nukala. ‘We imaged the atomic lattice of hafnium-zirconium oxide between two electrodes, including the light oxygen atoms,’ Nukala explains. ‘People believed that oxygen atom displacement in hafnium gives rise to polarization. So, any microscopy would only make sense if oxygen could be imaged and we had the exact tool for that. Then we applied an external voltage to the capacitor and watched the atomic changes in real time.’ Such an in situ experiment with direct imaging of oxygen atoms inside the electron microscope had never been done.

Migration
‘A significant feature that we observed is that the oxygen atoms move,’ explains Nukala. ‘They are charged and migrate following the electric field between the electrodes through the hafnium layer. Such a reversible charge transport enables ferroelectricity.’ Noheda adds: ‘This was a big surprise.’ There is indeed also a small shift in atomic positions at the picometre scale inside the unit cells but the overall effect of the oxygen migration from one side to the other side on the device response is much larger. This discovery paves the way for new materials that could be used for nanometre-sized storage and logic devices. ‘Hafnium-based ferroelectric memories are already in production, even though the mechanism behind their behaviour was unknown,’ says Nukala. ‘We have now opened up the road towards a new generation of oxygen-conducting, silicon-compatible ferroelectric materials.’

Noheda, who is the director of CogniGron, the Groningen Cognitive Systems and Materials Center, which develops new materials for cognitive computing, can see interesting applications for the new type of ferroelectric materials. ‘Oxygen migration is much slower than dipole switching. In memory systems that could emulate the short-term and the long-term memory of brain cells, material scientists currently try to make hybrid systems from different materials to combine these two mechanisms. ‘We can now do it in the same material. And by controlling oxygen movement, we could create intermediate states, again, like you find in neurons.’

Defects
Nukala, who is now an Assistant Professor at the Indian Institute of Science, is also interested in exploring the piezoelectric or electromechanical properties of the material. ‘All conventional ferroelectrics are also piezoelectric. What about these new non-toxic, silicon-friendly ferroelectrics? There is an opportunity here to explore their potential in microelectromechanical systems.’ 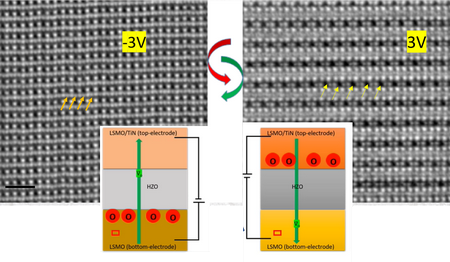 Electron microscope images, in the left panel a sample with a lot of oxygen atoms (some indicated with arrows), in the right panel a sample with many oxygen vacancies (some indicated with arrows). The schematic illustration shows movement of oxygen atoms and oxygen vacancies for two settings of the electric field over the capacitor. | Illustration Pavan Nukala

In the end, the properties of this new material stem from imperfections. ‘The oxygen can only travel because there are oxygen vacancies inside the crystal structure,’ says Nukala. ‘In fact, you could also describe what happens as a migration of these vacancies. These structural defects are the key to the ferroelectric behaviour and, in general, give materials novel properties.’

Read the original article on The University of Groningen.