University of California, Berkeley, chemists have discovered a way to simplify the removal of toxic metals, like mercury and boron, during desalination to produce clean water, while at the same time potentially capturing valuable metals, such as gold.

Desalination — the removal of salt — is only one step in the process of producing drinkable water, or water for agriculture or industry, from ocean or wastewater. Either before or after the removal of salt, the water often has to be treated to remove boron, which is toxic to plants, and heavy metals like arsenic and mercury, which are toxic to humans. Often, the process leaves behind a toxic brine that can be difficult to dispose of.

The new technique, which can easily be added to current membrane-based electrodialysis desalination processes, removes nearly 100% of these toxic metals, producing a pure brine along with pure water and isolating the valuable metals for later use or disposal. “Desalination or water treatment plants typically require a long series of high-cost, pre- and post-treatment systems that all the water has to go through, one by one,” said Adam Uliana, a UC Berkeley graduate student who is first author of a paper describing the technology. “But here, we have the ability to do several of these steps all in one, which is a more efficient process. Basically, you could implement it in existing setups.”

The UC Berkeley chemists synthesized flexible polymer membranes, like those currently used in membrane separation processes, but embedded nanoparticles that can be tuned to absorb specific metal ions — gold or uranium ions, for example. The membrane can incorporate a single type of tuned nanoparticle, if the metal is to be recovered, or several different types, each tuned to absorb a different metal or ionic compound, if multiple contaminants need to be removed in one step.

The polymer membrane laced with nanoparticles is very stable in water and at high heat, which is not true of many other types of absorbers, including most metal-organic frameworks (MOFs), when embedded in membranes. 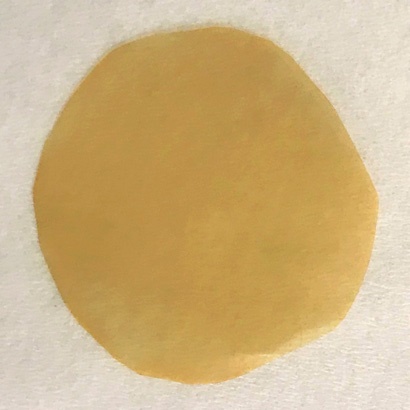 The PAF-embedded membranes are free of defects and exhibit optical transparency and high flexibility.

The researchers hope to be able to tune the nanoparticles to remove other types of toxic chemicals, including a common groundwater contaminant: PFAS, or polyfluoroalkyl substances, which are found in plastics. The new process, which they call ion-capture electrodialysis, also could potentially remove radioactive isotopes from nuclear power plant effluent.

In their study, to be published this week in the journal Science, Uliana and senior author Jeffrey Long, UC Berkeley professor of chemistry, demonstrate that the polymer membranes are highly effective when incorporated into membrane-based electrodialysis systems — where an electric voltage drives ions through the membrane to remove salt and metals — and diffusion dialysis, which is used primarily in chemical processing.

“Electrodialysis is a known method for doing desalination, and here we are doing it in a way that incorporates these new particles in the membrane material and captures targeted toxic ions or neutral solutes, like boron,” Long said. “So, while you are driving ions through this membrane, you are also decontaminating the water for, say, mercury. But these membranes can also be highly selective for removing other metals, like copper and iron, at high capacity.”

Water shortages are becoming commonplace around the world, including in California and the American West, exacerbated by climate change and population growth. Coastal communities are increasingly installing plants to desalinate ocean water, but inland communities, too, are looking for ways to turn contaminated sources — groundwater, agricultural runoff and industrial waste — into clean, safe water for crops, homes, and factories. 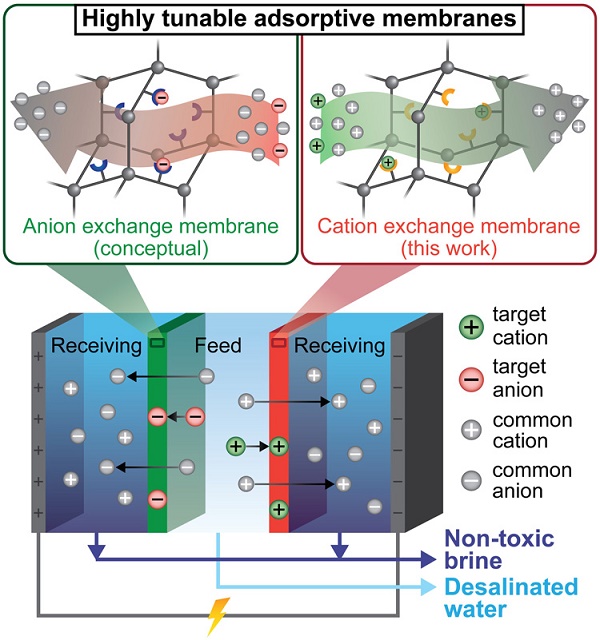 Polymer membranes with embedded nanoparticles that selectively remove ionic compounds (top) are employed in electrodialysis (bottom) to remove not only salt but also metals, many of which are toxic, producing pure clean water and a non-toxic brine that is easier to dispose of. The membranes (green and red) can be flushed and reused many times, while valuable metals could potentially be salvaged.

While reverse osmosis and electrodialysis work well for removing salt from high-salinity water sources, such as seawater, the concentrated brine left behind can have high levels of metals, including cadmium, chromium, mercury, lead, copper, zinc, gold, and uranium.

But the ocean is becoming increasingly polluted by industry and agricultural runoff, and inland sources even more so.

“This would be especially useful for those areas that have low levels of contaminants that are still toxic at these low levels, as well as different wastewater sites that have lots of types of toxic ions in their streams,” Long said.

Most desalination processes remove salt — which exists largely as sodium and chlorine ions in water — using a reverse osmosis membrane, which allows water through, but not ions, or an ion exchange polymer, which allows ions through, but not water. The new technology merely adds porous nanoparticles, each about 200 nanometers in diameter, that capture specific ions while allowing the sodium, chlorine, and other non-targeted charged molecules to pass through.

Long designs and studies porous materials that can be decorated with unique molecules that capture targeted compounds from liquid or gas streams: carbon dioxide from power plant emissions, for example. The nanoparticles used in these polymer membranes are called porous aromatic frameworks, or PAFs, which are three-dimensional networks of carbon atoms linked by compounds made up of multiple ring-shaped molecules — chemical groups referred to as aromatic compounds. The internal structure is related to that of a diamond, but with the link between carbon atoms lengthened by the aromatic linker to create lots of internal space. Various molecules can be attached to the aromatic linkers to capture specific chemicals.

To capture mercury, for example, sulfur compounds called thiols, which are known to tightly bind mercury, are attached. Added methylated sulfur groups enable capture of copper, and groups containing oxygen and sulfur capture iron. The altered nanoparticles make up about 20% of the weight of the membrane, but, because they are very porous, account for about 45% of the volume.

Calculations suggest that a kilogram of the polymer membrane could strip essentially all of the mercury from 35,000 liters of water containing 5 parts per million (ppm) of the metal, before requiring regeneration of the membrane.

Uliana showed in his experiments that boric acid, a compound of boron that is toxic to crops, can be removed by these membranes, though with diffusion dialysis that relies on a concentration gradient to drive the chemical — which is not ionic, like metals — through the membrane to be captured by the PAF nanoparticles.

“We tried different types of high-salinity water — for example, groundwater, industrial wastewater, and also brackish water — and the method works for each of them,” he said. “It seems to be versatile for different water sources; that was one of the design principles we wanted to put into this.”

Uliana also demonstrated that the membranes can be reused many times — at least 10, but likely more — without losing their ability to absorb ionic metals. And membranes containing PAFs tuned to absorb metals easily release their absorbed metals for capture and reuse.

“It is a technology where, depending on what your toxic impurities are, you could customize the membrane to deal with that type of water,” Long added. “You may have problems with lead, say, in Michigan, or iron and arsenic in Bangladesh. So, you target the membranes for specific contaminated water sources. These materials really knock it down to often immeasurable levels.”