A team of researchers from the Massachusetts Institute of Technology (MIT, Boston, USA), DESY, the University of Hamburg and the University of California at Davis (USA), has succeeded in generating electron pulses with a duration of only a few hundred attoseconds on metallic nanoantennas and used them to measure extremely weak electric fields.

An attosecond (as) corresponds to the billionth part of a billionth of a second. Comparable measurements were previously only possible with complex set-ups that generate attosecond UV pulses with complex laser systems. The method now demonstrated is even able to scan fields with a sensitivity a million times better than previously possible, and this without the use of elaborate laser or vacuum setups, but with a simple fibre laser setup and a small integrated chip. “With our new technique, we could even build oscilloscopes that make the oscillations of light visible,” explains DESY researcher Felix Ritzkowsky, one of the lead authors of the study, which the international team has now published in the journal Nature Photonics.

The oscilloscope has been one of the most important scientific instruments since the last century and can be found in almost every laboratory around the world. It allows the visualisation of electrical signals with a wide range of signal strengths and frequencies, ranging from the electrocardiogram (ECG) in medicine with frequency recordings in the hertz range (one hertz (Hz) is one oscillation per second) to radio frequencies in the megahertz range (106 Hz) and to gigahertz frequencies (109 Hz) in modern computers. Visualising signals on these short time scales allows us to gain a deep insight into the physical systems and their properties. 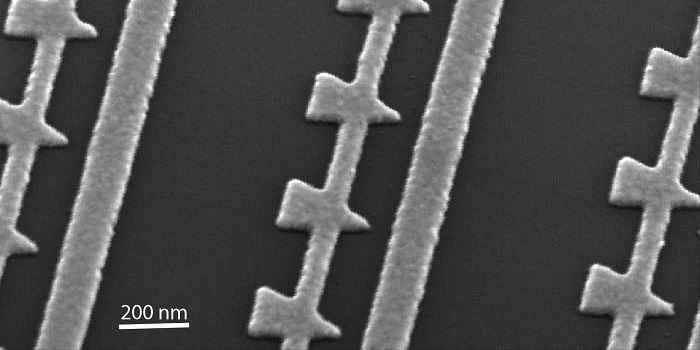 Scanning-electron-microscope image of the out of gold fabricated nanoantennas. The triangles are the actual nanoantennas. They generate a large electric field at their tip, similar to a lightning rod. The large field creates the electron pulse which is captured by the long striplines and subsequentially read out with conventional electronic.

Independent of the observed frequency, the oscilloscope records the electric fields by discrete sampling. It thus measures the shape of the wave by determining the respective height of the wave at much shorter intervals than a wave cycle. In conventional electronics, this is done by quick circuit switching and reading the instantaneous field strength of the signal, similar to stroboscopic photo series.

In modern optics, which deals with light, i.e. electromagnetic waves in the petahertz range (1015 Hz), conventional oscilloscopes cannot be used directly, so a variety of direct and indirect optical methods are used to record the light waves.

In their current investigations, however, the researchers have now been able to demonstrate that the scanning technique of conventional oscilloscopes can also be adapted for attosecond switching of electron pulses in nanoantennas. 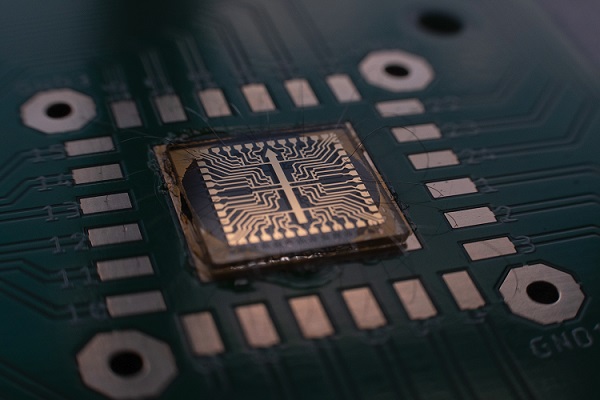 The nanoantennas used in the experiment are made on a glas chip and are fully integrated into a printed circuit board.

The use of these metallic nanoantennas, which have a size of a few 100 nanometres, makes it possible to efficiently capture light waves and make the antennas oscillate at the frequency of the light. The team was able to catch flashes of light so short that they consisted of only two oscillations of a light wave. The oscillation they produced was strong enough to generate a few hundred attosecond short pulse of electricity, which is produced by quantum mechanical tunneling emission of electrons.

By using many nanoantennas simultaneously, the current can be added up and - similar to a solar cell or photodiode - the charge released can be measured with conventional electronics. To scan fields, the attosecond current pulse can now be generated specifically with the femtosecond laser pulse. If this current interacts with a second electric field or a light wave that is to be measured, the instantaneous voltage of this field causes a small change in the magnitude of the current pulse. This change can be read electronically. If this is now repeated at short intervals, the complete electrical signal can be reconstructed. Due to the extreme briefness of the sampling pulse, this technique can potentially be used to measure signals with frequencies down to the petahertz range.

This technique is an important advance in the application of ultrashort light-matter interaction and will allow new phenomena to be studied with higher sensitivity and attosecond resolution in time. “The new petahertz oscilloscope has the potential to fundamentally change measurement technology in the optical field, especially spectroscopy,” says Franz Kärtner, Leading Scientist at DESY in Hamburg, who was influential in shaping this research direction at MIT. “The method enables spectroscopic determination of amplitude and phase of transmission from the microwave range to the UV range with a single instrument that can be shrunk to chip size in the future.” Phillip Keathley, lead researcher on the project at MIT, envisions a wide range of potential applications: “For example, this method will help researchers better understand the absorption mechanisms of light in plants or in photovoltaics, or better identify molecular fingerprints in complex biological systems.”