Transport Phenomena at the Nanoscale

Excitation gratings created by interference of two light waves on a material allow investigating transport phenomena at a scale comparable to their wavelength. Going to the X-rays allows accessing these phenomena at the nanoscale.

Transient grating spectroscopy is an elegant method that uses two laser pulses to activate a medium by creating an interference pattern made of parallel stripes of excitations that can be thermal, electronic, magnetic or even structural. The modulation depth of the pattern and its evolution can be measured by diffracting a third, time-delayed probe beam on the transient grating.

The modulation depth decays as the initial excitation propagates through the material. The distance between the stripes is determined by the wavelength of the pulses used to create the grating, which in the visible-ultraviolet part of the spectrum, is in the order of hundreds of nanometers. 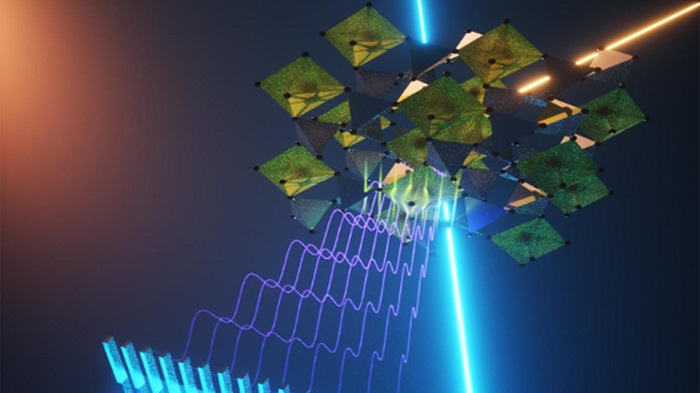 A pulsed beam of X-rays is incident on a diamond mask (blue), creating an grating of excitation on the sample. A laser beam (thin blue line on the right) is diffracted by the transient grating in the sample, and the diffracted beam (yellow line) is recorded as a function of time, with respect to the initial X-ray beam pulse.

Transient grating spectroscopy is a powerful tool for monitoring the transport properties of a material, be it heat, electric or magnetic flux, or structure. At a time of miniaturization of devices, the need to reach the regime of nanoscale transport is ever more pressing. Transport properties at the nanometer scale are completely unknown, and are expected to greatly differ from those at the micrometer or larger scales. This calls for the use of short wavelength radiation, and in particular X-rays. The main challenge is to cross two X-ray beams in order to generate a grating with nanometer step size.

Now, an international team of scientists have exploited the so-called Talbot effect to create the interference pattern with hard X-ray beams at a subnanometer wavelength (0.17 nm). The collaboration includes the LSU and LACUS (Majed Chergui) at EPFL, the PSI (Cris Svetina), the MIT (Keith Nelson), the FERMI free electron laser in Trieste (Claudio Masciovecchio), the Université Jean-Monnet-Saint-Étienne (Jérémy Rouxel), and the European Laboratory for Non-Linear Spectroscopy in Florence (Renato Torre), among others. The scientists used the Swiss X-ray Free Electron Laser (SwissFEL) at PSI.

The results are published in Nature Photonics, showing that the transient excitation grating decays in tens of femtoseconds to picoseconds, revealing the material’s phonon response. The researchers probed the grating using an optical pulse at 400 nm. This is the first demonstration of hard X-ray transient grating spectroscopy, which opens the way to exciting and novel developments.

“Hard X-ray transient grating is uniquely suited for investigating nanoscale transport phenomena in bulk and nanostructured materials, disordered materials, and even in liquids,” says Majed Chergui. “Future experiments can open the field to applications in the characterization of materials, especially for nano-electronics, nano-optics, and nano-magnetism.”