Silver Ions Hurry Up, Then Wait as They Disperse

There’s gold in them thar nanoparticles, and there used to be a lot of silver, too. But much of the silver has leached away, and researchers want to know how.

Gold-silver alloys are useful catalysts that degrade environmental pollutants, facilitate the production of plastics and chemicals and kill bacteria on surfaces, among other applications. In nanoparticle form, these alloys could be useful as optical sensors or to catalyze hydrogen evolution reactions.

A new study by scientists at Rice University and the University of Duisburg-Essen, Germany, reveals a two-step mechanism behind silver’s dissipation, a discovery that could help industry fine-tune nanoparticle alloys for specific uses.

The researchers used a hyperspectral dark-field imaging microscope to study gold-silver alloy nanoparticles containing an excess of silver in an acidic solution. The technique allowed them to trigger plasmons, ripples of energy that flow across the surface of particles when lit. These plasmons scatter light that changes with the alloy’s composition. 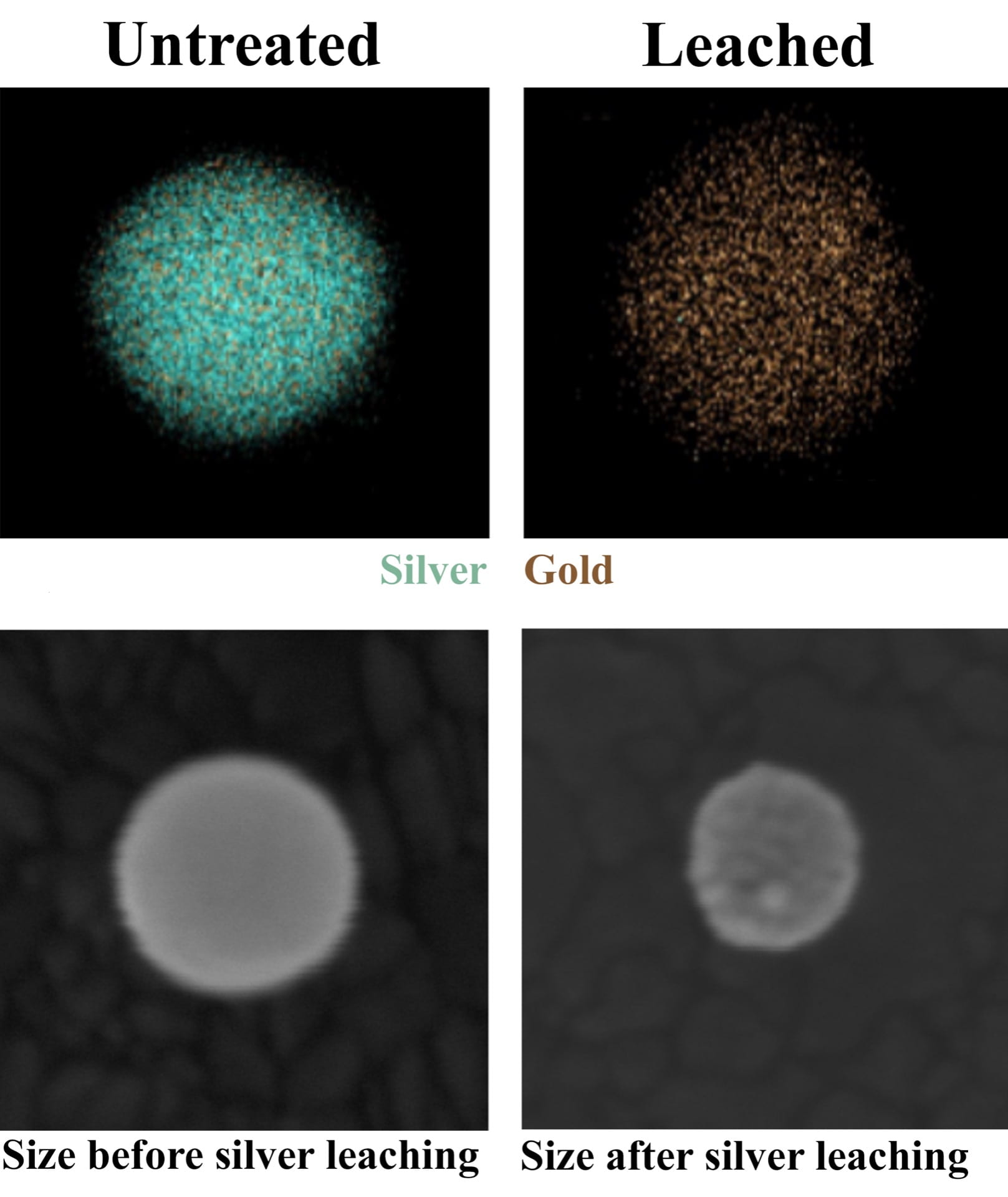 Chemists have quantified the release of silver ions from gold-silver nanoparticle alloys. At top, transmission electron microscope images show the change in color as silver (in blue) leaches out of a nanoparticle over several hours, leaving gold atoms behind. The bottom hyperspectral images show how much a nanoparticle of silver and gold shrank over four hours as the silver leached away.

“The dependence of the plasmon on alloy composition allowed us to record silver ion leaching kinetics in real time,” said Al-Zubeidi, lead author of the study.

Al-Zubeidi noted films of gold and silver alloy have been in use for decades, often as antibacterial coatings, because silver ions are toxic to bacteria. “I think the silver release mechanism has been implied from studies of alloy films, but it’s never been proven in a quantitative way,” he said.

Initially, silver ions leach quickly from nanoparticles, which literally shrink as a result. As the process continues, the gold lattice in most instances releases all the silver over time, but about 25% of particles behave differently and silver leaching is incomplete.

Al-Zubeidi said what they observed suggests gold could be manipulated to stabilize the alloy nanoparticles.

“Usually silver leaching would last about two hours under our conditions,” he said. “Then in the second stage, the reaction no longer happens on the surface. Instead, as the gold lattice rearranges, the silver ions have to diffuse through this gold-rich lattice to reach the surface, where they can be oxidized. That slows the reaction rate a lot.

“That could be an interesting composition for applications like catalysis and electrocatalysis,” he said. “We’d like to find a sweet spot around 50%, where the particles are stable but still have a lot of their silver-like properties.”

Understanding such reactions could help researchers build a library of gold-silver catalysts and electrocatalysts for various applications.

Link said the Rice team welcomed the opportunity to work with Barcikowski, a leader in the field of nanoparticle synthesis via laser ablation. “This makes it possible to create alloy nanoparticles with various compositions and free of stabilizing ligands,” he said.

“From our end, we had the perfect technique to study the process of silver ion leaching from many single-alloy nanoparticles in parallel via hyperspectral imaging,” Landes added. “Only a single-particle approach was able to resolve the intra- and interparticle geometry.”

“This effort will enable a new approach to generate nanostructured catalysts and new materials with unique electrochemical, optical and electronic properties,” said Robert Mantz, program manager for electrochemistry at the Army Research Office, an element of the U.S. Army Combat Capabilities Command’s Army Research Laboratory. “The ability to tailor catalysts is important to achieve the goal of reducing soldier-borne weight associated with power storage and generation and enable novel material synthesis.”