A graphene-based “beam splitter” for electronic currents has been built by researchers in France, South Korea, and Japan. Created by Preden Roulleau at the University of Paris and colleagues, the tuneable device’s operation is directly comparable that of an optical interferometer. The technology could soon enable allow electron interferometry to be used in nanotechnology and quantum computing.

An optical interferometer splits a beam of light in two, sending each beam a long a different path before recombining the beams at a detector. The measured interference of the beams at the detector can be used to detect tiny differences in the lengths of the two paths. Recently, physicists have become interested in doing a similar thing with currents of electrons in solid-state devices, taking advantage of fact that electrons behave as waves in the quantum world.

Graphene is a sheet of carbon just one atom thick and is widely considered to be the best material for realizing such “electron quantum optics”. Indeed, researchers have already used the material to make simple electron interferometers. Now, Roulleau’s team has created a fully-adjustable electron beam splitter that could be used to build more sophisticated devices. It exploits the quantum Hall effect, whereby the application of a strong magnetic field perpendicular to a sheet of graphene will cause an electron current to flow around the edge of the sheet. 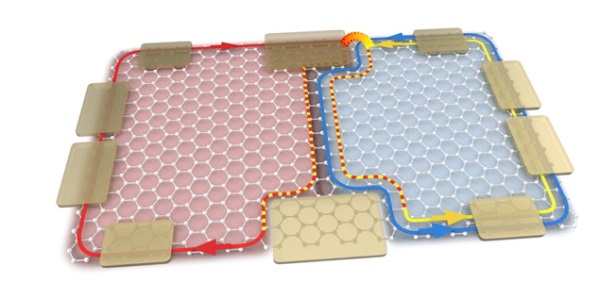 Splitting up: schematic of the electron beam splitter with the n side on the right and the p side on the left.

The team’s interferometer design features a graphene p-n junction, which comprises a nanoscale flake of graphene where one side is p-doped and the other is n-doped by applying two different electric fields.

The device operates by first injecting an electron current at one corner of the n side, which causes two current loops to form on either side of the p-n boundary, flowing in opposite directions. While the edge of the p side carries a clockwise loop of spin-up electrons, the n side has two separate channels flowing anti-clockwise, each containing opposite electron spins.

At the point where the two loops first meet at the boundary, the effect of quantum tunnelling means that a certain proportion of spin-up electrons on the n side will transfer to the p side. By applying a varying voltage to this point through a tuneable gate, Roulleau and colleagues discovered that they could tightly control this tunnelling fraction: an ability directly comparable to a tuneable beam splitter used in optical interferometers.

At the other end of the boundary, the researchers then applied a second voltage to act as a “reverse” beam splitter, forcing electrons that had tunnelled to recombine with the current on the n side. To determine the influence of these tunnelling electrons, Roulleau’s team measured an output current on the p side, at the opposite corner to the current injection point.

From their observations, the team spotted characteristic oscillations in this output current, which varied depending on the voltage and magnetic field strength applied to the first beam splitter. In analogy with the interference patterns seen in recombined interferometer beams, these oscillations indicated the phase differences between the recombined n side currents. The team will now aim to further compact their graphene flake design; potentially leading to new, highly advanced capabilities in both nanotechnology and quantum computing.

The device is described in Physical Review Letters.