How to Get Salt out of Water: Make it Self-Eject

Crystallizing salts can grow “legs,” then tip over and fall away, potentially helping to prevent fouling of metal surfaces, researchers find.

About a quarter of a percent of the entire gross domestic product of industrialized countries is estimated to be lost through a single technical issue: the fouling of heat exchanger surfaces by salts and other dissolved minerals. This fouling lowers the efficiency of multiple industrial processes and often requires expensive countermeasures such as water pretreatment. Now, findings from MIT could lead to a new way of reducing such fouling, and potentially even enable turning that deleterious process into a productive one that can yield saleable products.

The findings are the result of years of work by recent MIT graduates Samantha McBride PhD ’20 and Henri-Louis Girard PhD ’20 with professor of mechanical engineering Kripa Varanasi. The work, reported today in the journal Science Advances, shows that due to a combination of hydrophobic (water repelling) surfaces and heat, dissolved salts can crystallize in a way that makes it easy to remove them from the surface, in some cases by gravity alone.

When the researchers began studying the way salts crystallize on such surfaces, they found that the precipitating salt would initially form a partial spherical shell around a droplet. Unexpectedly, this shell would then suddenly rise on a set of spindly leg-like extensions grown during evaporation. The process repeatedly produced  multilegged shapes, resembling elephants and other animals, and even sci-fi droids. The researchers dubbed these formations “crystal critters” in the title of their paper.

After many experiments and detailed analysis, the team determined the mechanism that was producing these leg-like protrusions. They also showed how the protrusions varied depending on temperature and the nature of the hydrophobic surface, which was produced by creating a nanoscale pattern of low ridges. They found that the narrow legs holding up these critter-like forms continue to grow upward from the bottom, as the salty water flows downward through the straw-like legs and precipitates out at the bottom, somewhat like a growing icicle, only balanced on its tip. Eventually the legs become so long they are unable to support the critter’s weight, and the blob of salt crystal breaks off and falls or is swept away. 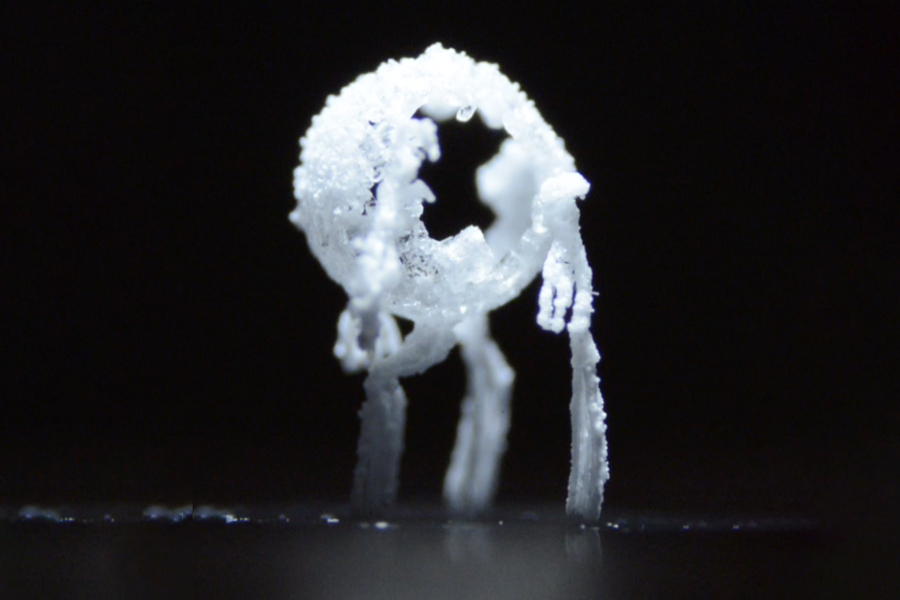 When the researchers began studying the way salts crystallize on certain surfaces, they found that the process repeatedly produced predictable multi-legged shapes. The researchers dubbed them collectively as “crystal critters” in the title of their paper.

The work was motivated by the desire to limit or prevent the formation of scaling on surfaces, including inside pipes where such scaling can lead to blockages, Varanasi says. “Samantha’s experiment showed this interesting effect where the scale pretty much just pops off by itself,” he says.

“These legs are hollow tubes, and the liquid is funneled down through these tubes. Once it hits the bottom and evaporates, it forms new crystals that continuously increase the length of the tube,” McBride says. “In the end, you have very, very limited contact between the substrate and the crystal, to the point where these are going to just roll away on their own.”

McBride recalls that in doing the initial experiments as part of her doctoral thesis work, “we definitely suspected that this particular surface would work well for eliminating sodium chloride adhesion, but we didn't know that a consequence of preventing that adhesion would be the ejection of the entire thing” from the surface.

One key, she found, was the exact scale of the patterns on the surface. While many different length scales of patterning can yield hydrophobic surfaces, only patterns at the nanometer scale achieve this self-ejecting effect. “When you evaporate a drop of salt water on a superhydrophobic surface, usually what happens is those crystals start getting inside of the texture and just form a globe, and they don't end up lifting off,” McBride says. “So it's something very specific about the texture and the length scale that we're looking at here that allows this effect to occur.”

This self-ejecting process, based simply on evaporation from a surface whose texture can be easily produced by etching, abrasion, or coating, could be a boon for a wide variety of processes. All kinds of metal structures in a marine environment or exposed to seawater suffer from scaling and corrosion. The findings may also enable new methods for investigating the mechanisms of scaling and corrosion, the researchers say.

By varying the amount of heat along the surface, it’s even possible to get the crystal formations to roll along in a specific direction, the researchers found. The higher the temperature, the faster the growth and liftoff of these forms takes place, minimizing the amount of time the crystals block the surface.

Heat exchangers are used in a wide variety of different processes, and their efficiency is strongly affected by any surface fouling. Those losses alone, Varanasi says, equal a quarter of a percent of the GDP of the U.S. and other industrialized nations. But fouling is also a major factor in many other areas. It affects pipes in water distribution systems, geothermal wells, agricultural settings, desalination plants, and a variety of renewable energy systems and carbon dioxide conversion methods.

This method, Varanasi says, might even enable the use of untreated salty water in some processes where that would not be practical otherwise, such as in some industrial cooling systems. Further, in some situations the recovered salts and other minerals could be salable products.

While the initial experiments were done with ordinary sodium chloride, other kinds of salts or minerals are expected to produce similar effects, and the researchers are continuing to explore the extension of this process to other kinds of solutions.

Because the methods for making the textures to produce a hydrophobic surface are already well-developed, Varanasi says, implementing this process at large industrial scale should be relatively rapid, and could enable the use of salty or brackish water for cooling systems that would otherwise require the use of valuable and often limited fresh water. For example, in the U.S. alone, a trillion gallons of fresh water are used per year for cooling. A typical 600-megawatt power plant consumes about a billion gallons of water per year, which could be enough to serve 100,000 people. That means that using sea water for cooling where possible could help to alleviate a fresh-water scarcity problem.

“This work shows a remarkable and interesting phenomenon,” says Neelesh Patankar, a professor of mechanical engineering at Northwestern University, who was not associated with this research. The findings, he says, “may lead to an entirely new approach to mitigate mineral fouling in industrial processes. Not only is this work interesting from a fundamental science perspective, in my opinion it is also of practical importance.”